THE BRIGHT SUNLIGHT that illuminates Tel Aviv’s shimmering surface also reveals a city driven by inventiveness and potential. Comparable in scale to Silicon Valley with regard to technology development, Tel Aviv boasts one of the most robust tech industries in the world — acting as an incubator for startups nurtured by the country’s government with perks that include no commissions or fees coupled with strategic opportunities for strengthening the core Israeli economy.

In the first half of 2016 alone, more than $2.8 billion was invested in Israel’s business sectors. Facebook located its second-largest R&D center in Israel, and more than 270 multinational companies maintain a presence here, including Microsoft, Apple, Google, Intel, LG Spark, Siemens, GE, Samsung and HP.

Much of the early technology in the mobile phone industry arose here, along with familiar names like Xbox (the technology for Xbox Kinect was developed by Israeli company Primesense) and USB (Universal Serial Bus). Among the major technology companies founded in Tel Aviv — or that have established a significant presence here — are content discovery companies Outbrain and Taboola, web development platform Wix and cyber security giant Checkpoint.

Despite its standing as a relatively young country, Israel enjoys enormous advantages in terms of human resources, and its educated, talented workforce has proven to be one of its strongest assets.

“In terms of how this growth occurred, it’s important to understand that we are a young, immigrant country,” elaborates Sharon Eshaghian, director of business development, Government of Israel Economic Mission to the West Coast. “We feel a main driver is the military service, which requires three years of mandatory service for men and two years of mandatory service for women.”

Eshaghian explains that besides giving workers an invaluable background in technical fields, military service also teaches teamwork and collaboration, how to efficiently and effectively work together without wasting time over things that don’t matter, how to take risks and how to deal with stress. “Everyone,” she says, “is taught to question authority while justifying their position when they don’t agree. This is, if you will, the secret sauce of our success.” 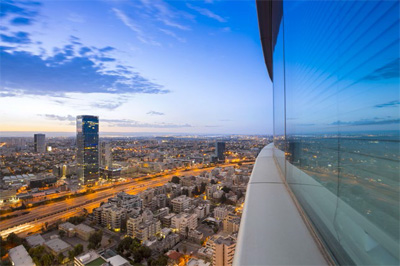 In terms of support and infrastructure for business development, multiple programs initiated by the government have been structured to help businesses succeed, attending to every level of the investment process and offering a comprehensive guide via an online portal at investinisrael.gov.il. The Office of Chief Scientist of Israel provides this assistance, which extends to fields that include pharmaceuticals, life sciences, homeland security, wearable technology and even agriculture — it was Israeli company Netafim that developed drip irrigation technology, an invention Eshaghian explains emerged out of pure need.

“In Israel, we recycle over 85 percent of our water for industrial use,” she says. (Spain is next at about 19 percent.) “As we have no water, we had to find a way to reuse it for agriculture and manufacturing, and this method had to be both cost-effective and sustainable.”

Today, emerging sectors include massive growth in cyber security. Both Lockheed Martin and Volkswagen have undertaken joint ventures to advance and improve automotive cyber security, while other areas include drones and anti-drone technology. In fact, Israeli company Airfence created the sophisticated technology that reveals which drones should be there while recognizing which ones shouldn’t.

Elsewhere, rapid growth occurs in personal, wearable technology that allows connection via the internet to devices beyond a personal computer; artificial intelligence; and augmented and virtual reality development and innovation for both hardware and software such as virtual reality goggles that encourage content creators to create within this new, innovative format. One of the first consumer virtual reality 3D 360-degree cameras was developed here by HumanEyes, while Israeli startups Mantis Vision and SagivTech teamed up to produce the core technologies for Google’s Project Tango, designed to create an interactive model of the user’s environment.

In Tel Aviv, partnerships are available that are designed to help with tax incentives and initial funding contributions, along with incubator programs to help businesses get off the ground. There is also support for Israeli companies abroad — including big tech companies that already have a presence in other countries, enabling them to identify further investment and development opportunities.

“Wherever there is need for technology,” offers Eshaghian, “Israel will develop it and become a leader in its growth, expansion and deployment.” 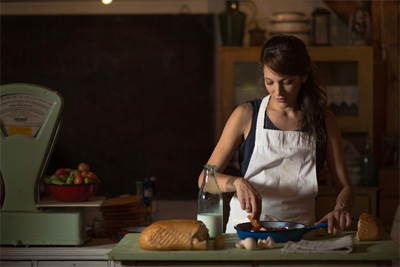 Ruthie Rousso hard at work in the kitchen © ZOHAR RON

CHECKING IN WITH RUTHIE ROUSSO

What’s trending within Tel Aviv’s culinary scene — any exceptional new restaurants that should be on the radar of visitors?
The trend these days is sophisticated casual food. Most of the famed chefs have opened an underdog/sister restaurant [as an alternative to] their more expensive place, which serves good food pretty fast — and for an affordable price. Many of these new places are located in one of two trendy indoor food markets: Shuk Tzafon and Sarona Market. Another hot trend is how the “new Israeli” kitchen is being defined: robust, seasonal, colorful and sexy, wildly plated and eaten with hands only. It usually incorporates Palestinian agriculture, ingredients and techniques (all traditional) with the most advanced international approaches to aesthetics and nutrition. Some of the best places to try this food are Rak Hayom (Shuk Tzafon), Habasta, North Abraksas and Joz Veloz.

Are there more dedicated chefs or chef-driven restaurants now than in recent years?
The growth in the dining scene in Tel Aviv is probably one of the most extreme in the world. Israelis like to do things BIG. Things escalated profoundly since the opening of Sarona Market, with dozens of new places (and not enough cooks and waiters to fill them up). And obviously, many of these new places are chef-driven. The appearance of food shows on prime-time television created this little niche of “star chefs” whom everyone wants to meet and dine with. Most of the places I’ve mentioned, however, are not chef’s restaurants and were created with hard labor rather than instant fame.

What food, ingredient or dish would you miss the most if it suddenly disappeared?
Tahini and lemon — I can’t live without them. When I travel, and I travel a lot, I take tahini with me, because … who knows? It will surely become handy at some point!

Things to Do in Tel Aviv

All work and no play is … well, just wrong. Once you’ve wrapped up your business in Tel Aviv, head out to explore the city’s many attractions and entertainment options. While a walking tour of the Bauhaus architecture, central White City district and a stop to stroll the Carmel Market definitely should be on the list of every visitor, consider brand-new options such as the vibrant marketplaces of Sarona Market and Shuk Tzafon (North Market), where locals flock for dining, shopping and music. Worlds within worlds, each shuk — or marketplace — has a vibe entirely its own. 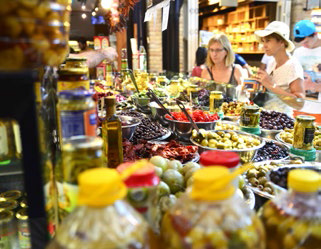 Sarona Market is the largest culinary market in the city, with 91 stalls and shops in the center of town. Open seven days a week, it offers a cornucopia of products that have local origins plus a selection of global choices such as balsamic vinegars from Italy, French Champagnes, world cheeses, Atlantic seafood and spices from exotic Far Eastern locales. Located in the Ramat Hachayal neighborhood, Shuk Tzafon has a far more intimate scale, with 15 market stalls and 15 specialty shops. The vibe is strongly local, and the space’s food and beverage offerings make it a favorite with neighborhood residents and with the staffs of local tech businesses located nearby.

Follow up your market browsing with a tour of Beit Hatfutsot (the Diaspora Museum), located on the campus of Tel Aviv University, where exhibits include murals, art, artifacts and dioramas detailing the history of the Jewish people. For a deeper look at the city’s history, visit the Eretz Israel Museum, a collection of pavilions that displays the many historical artifacts uncovered in Tel Aviv, from glasswork and ceramics to fabrics and coins. Also not to miss: the Old Tel Aviv Port area, where a fascinating cluster of cafés and shops are located alongside seaside bars and restaurants presided over by local chefs.

Tel Aviv Ben Gurion International Airport lies about nine miles southeast of the city. A railway station located on the lower level of Terminal 3 provides access to the city and other locations. Travel time to Savidor Central Railway Station in Tel Aviv is roughly 18 minutes; the airport train makes stops here and at three other city locations. Trains do not run on Jewish holidays or during Shabbat (Friday afternoon to late Saturday evening). City buses and taxis also provide transportation to and from city center, along with limousine and private shuttle carriers. Shared door-to-door taxis, called sheruts, are also available. Most major car rental companies have desks in the airport arrivals hall.

U.S. citizens must have a passport valid for six months beyond date of entry, and it must include at least one blank page. Stays of 90 days or less do not require a visa. U.S. citizens with certain affiliations may be denied entry.

Where to Stay in Tel Aviv

Hotel Montefiore History meets boutique luxury with an enviable location steps from Rothschild Boulevard in the Lev HaIr district. Built in 1922, the property was elegantly restored for its lodging transformation.
Montefiore 36 $$$