THE WAY OF THE PILGRIM, it’s said, begins with the first step out the door. From there, the journey unfolds in a kaleidoscope of surprises.

Foot-sore pilgrims quest along Spain’s Camino de Santiago, taking any of eight sanctioned Ways. They all converge on Santiago de Compostela, the resting place of the Apostle James and a world pilgrimage site for nearly 1,000 years.

The Galician capital of 90,000 swells annually with more than 230,000 pilgrims who earn a Compostela certificate for walking a minimum of 100 kilometers (about 62 miles) or biking 200 kilometers. Many thousands more travel part of the route or come to experience the aura of an ancient tradition that still energizes the modern world.

Within that tradition, it’s said the Apostle James preached in Spain between the years 33 and 42. He returned to Jerusalem and was beheaded around the year 44. Loyalists returned his body to the Iberian Peninsula, and the scallop shells that clung to the boat became the saint’s symbol.

About 813, the monk Pelayo followed a vision to the Apostle’s tomb; Santiago Cathedral soars from the spot today. Pilgrimages grew up around the relics and soon ranked with those to Rome and Jerusalem. Today Americans are No. 4 on the Camino roster behind Spaniards, Italians and Germans. 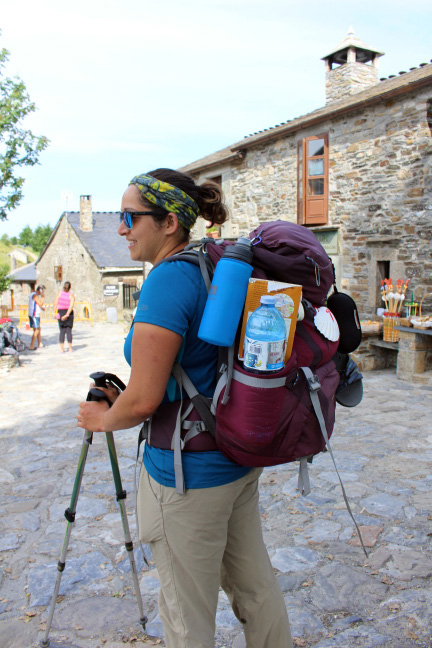 Pilgrim Suzie Greenman of New York pauses for a moment in O Cebreiro, cresting one of the last major peaks before Santiago. © BETSA MARSH

Two-thirds of the pilgrims choose The French Way, a 790-kilometer (490-mile) path over the Pyrenees and across Northern Spain. It’s the bucket-list gift Suzie Greenman of New York City gave herself when she snagged a spot in medical school.

Greenman endured bedbugs at the pilgrim hostels and blisters, as well as the drone of the eternal question: Why do the Camino? “I thought it would be a cool hike in Spain,” she said as we paused in O Cebreiro, cresting one of the last major peaks before Santiago. “But it’s much more spiritual, more fulfilling and satisfying than I thought.”

She began each morning with a gratitude walk, counting one blessing per step. Reared in the Jewish and Episcopalian faiths, Greenman attended Saturday night service “for meditation and reflection. Let’s praise God, let’s praise his glory.”

“We’re not worried about the certificate,” Ward said of the Compostela. “We still went to the Cathedral, and it’s still thrilling to see so many people, so emotional. They were emotional because it’s damn hard! It’s hard physically and it’s hard emotionally.”

Ward pampered herself with a stay at the Parador de Santiago de Compostela, across Plaza del Obradoiro from the Cathedral. In 1499, King Ferdinand and Queen Isabella commanded a pilgrim hospital/inn be built, and this monumental hotel surprises with ecclesiastical touches at every turn.

For road-weary disciples who want their certificates, the first stop is the Pilgrim Office. They present their pilgrim passports and receive the hard-earned Compostelas, inscribed with their Latin names.

Some pilgrims collapse in Plaza del Obradoiro in front of the Cathedral, kissing the center stone. Inside, most file past the saint’s silver casket and hug his seated statue.

“I cried when I saw the Cathedral, I cried in the Mass, especially when the organ started,” said Tyler Buckhout of North Grafton, Mass., who struck out on Camino a few days after college graduation.

“I realize the Cathedral wasn’t the point,” said Buckhout, who blogged during his 33 days on The French Way — even when he was hospitalized after a bad empanada. “I was walking and thinking about the Cathedral, but it’s never about Santiago. It’s an ideal, and the physical place will never match up with what’s in your head.”

Pilgrims’ Mass in the Cathedral turns emotional in a litany of languages. As communicants come forward, one glance tells you they’ve tackled the Camino: walking sticks and hiking boots, bandages and backpacks.

After Mass, we heard the Benedictine sisters at the San Paio de Antealtares convent bake the best Tarta de Santiago almond cake. In another sort of pilgrimage, I took my €11.50 up to their turnstile window and a nun cheerfully sold me a cake dusted with the sugary silhouette of St. James’ cross and sword.

We saved room for dinner at Casa Marcelo, Santiago’s only Michelin-starred restaurant. At family-style tables, we started with tomatoes punched up with pimento granité. Then the chef veered to the East for pork dumplings, then out to sea with a whole ocean perch fried to lacy transparency. The finale? A bun-shaped tiramisu paired with coconut and avocado ice creams.

As pilgrims recharged in Santiago, many, like Buckhout, pondered the lessons of Camino.

“I was not very religious coming here,” he reflected. “Now I don’t believe there are coincidences — just fated experiences.”

Like the legions who walked these Ways before him, Buckhout informed his every step with a fresh pilgrim perspective.

Domestic and international flights arrive at the Santiago de Compostela Lavacolla Airport, 6.2 miles northeast of the city center. Bus and taxi services are available at the airport; expect to pay about $25 for a taxi to Santiago from the airport.