AFTER CRUISING FOR SEVEN DAYS from New York on board Norwegian Gem, we arrived at the lovely island of St. Kitts. We docked and made our way to the Marriott St. Kitts, ferried by our friendly cab driver, Mikey Marlusmd. Mikey dropped us off and we arranged a pick-up time before heading to the pro shop. “Don’t worry,” he said. “I will be here.” Although a large group of cruisers stood in line to check in, we were out the door first because we brought our own clubs, a last-minute decision. The starter saw us fumbling with our shoes and gear and suggested we tee off on Hole 13 — a brilliant move, as we were able to play holes 13–18 and then regroup on holes 10–12 to complete the back nine first and in record time.

Opened in 1976, the course underwent a massive renovation in 2002 and reopened Nov. 8, 2004. Incorporating 125 irrigated acres, Royal St. Kitts is the only course boasting play along both the Caribbean Sea and the Atlantic Ocean. Canadian architect Thomas McBroom’s redesign added water hazards on 12 holes, 83 bunkers and hundreds of coconut palm trees along the Atlantic. He used the natural terrain to enhance the course where egrets, lizards and green-tailed monkeys live. We saw these shy little creatures at a distance as we played. Paul Gosselin joined me for the day of golf. We had a fun time even though the day turned quite hot.

HOLE 13 | 515 yards, par 5
As this was our starter hole, we did not want to be the slowpokes, so we immediately teed up and shot away. My ball landed left of the right fairway bunker while Paul’s sailed beyond the same bunker and a little to the right. We were concerned, as marsh and water come into play; sadly, Paul’s drive exceeded the margin of safety. The next shot down the flat fairway requires accuracy, as the dry ground can send a ball tumbling into the rough, impossible to find. I had a decent hit, got on the green in four and two-putted for a bogey.

HOLE 15 | 161 yards, par 3
Don’t let the distance fool you. This hole has a slight Pebble Beach feel, as wind from the ocean may affect your tee shot. The view from the tee’s high vantage point is breathtaking, with the Atlantic behind the green and the neighboring island beyond. It is also the opening to a string of remarkably beautiful holes. Eight bunkers guard this green whose undulating surface makes putting difficult. I was pleased to feather an iron to about 13 feet of the pin; Paul landed slightly off and chipped up for a bogey. I missed my long birdie putt for the first of few pars during our round. 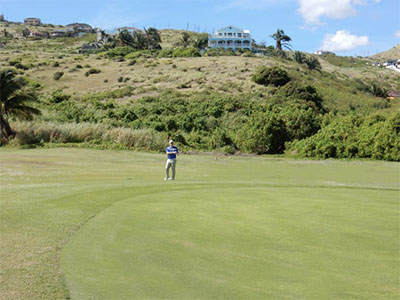 HOLE 16 | 383 yards, par 4
You have made it to the Atlantic Ocean, which runs along the left side, spraying fog across and wetting the fairway. It was magical, as were our two near-perfect drives. Mine skirted a little over the edge of the beach as it powered back to the left side of the fairway. Paul’s bomb passed mine and landed 80 yards farther but dead center. Driving the ball accurately is key; stay right center of the fairway and away from the ocean. The second shot appears simple, but the Atlantic on the left is always ready to swallow errant shots. I overshot the green, costing me par, as Paul nailed his shot to the green for par.

HOLE 17 | 404 yards, par 4
Designed after the 18th at Pebble Beach, more waves crashing from the Atlantic greet you on 17. The Atlantic runs the entire length of the left side, and a small pond sits on the right. Take a clean shot right center; keep in mind the approach returns back to the Atlantic like a mini peninsula. I had significant issues carding a double bogey while Paul played perfectly, securing another par. A truly beautiful hole.

HOLE 11 | 591 yards, par 5
As we jumped around to finish the back nine, a kindly foursome let us cut in front. We made erratic shots from the tee, not the display you want as you try to play fast and impress people. Eleven is a long hole from the tips, the longest par 5 at Royal St. Kitts. From the tee’s high vantage you get a glimpse of the Atlantic Ocean. A beautiful salt marsh lies right of the tee box but does not come into play. Egrets nested near the pond the day we played. The dogleg left’s bunkers stand ready to grab your ball on the left, and a water hazard runs the entire right. Paul scrambled for par as I carded a disappointing bogey.

HOLE 2 | 451 yards, par 4
This is a hole you want to play a few times to figure out the best plan of attack. Set up as a dogleg right, it looks as if you can easily cut the corner. We took a few fun drives to see how far we could cut the corner and failed miserably, landing in the backyards of local Kittitians where the hole bends. Unless you have a super drive, position yourself farther to the left than expected. My drive ended up just inside the right wall but playable; I chipped back into play from around some growth. Paul’s was a little farther up on the right but in the clear. The many bunkers protecting the green add difficulty.

HOLE 9 | 192 yards, par 3
This hole is challenging, as it faces directly into the prevailing winds. Players might consider a fairway wood to compensate for the wind and length, as an iron often leaves you short of the green, surrounded by bunkers on both left and right. Those underestimating the distance can recover with an easy chip to the green. The wind was dead and the day was hot as we finished our round. Tucking in two pars, we headed into the clubhouse for a much-needed drink and Royal St. Kitts’ world-famous tuna salad. Mikey was ready and took us back to the Norwegian Gem on time for our departure.