MINNEAPOLIS ASSERTS its star power on a variety of fronts, from its history as a music city (Prince remained loyal to his roots here) to its wealth of art galleries and museums to its status as a professional sports magnet.

Sharing its Twin Cities moniker with the neighboring state capital of St. Paul, Minneapolis stepped into the spotlight in 2018 as the host of Super Bowl LII, showing off the new U.S. Bank Stadium — home of the Minnesota Vikings and host to this summer’s upcoming X Games as well as this month’s 2019 NCAA Men’s Final Four. A slew of new developments accompanied its opening.

“We had a lot of big infrastructure changes leading up to the Super Bowl,” said Kristen Montag, senior public relations and communications manager, Meet Minneapolis. “The stadium sparked a lot of development and growth — more stores, a lot more people.”

According to Montag, after the stadium opened in Downtown East, it spurred a lot of development in the nearby Mill District. This month the Canopy by Hilton Minneapolis Mill District opens as a 183-room hotel in the renovated former Thresher Square building. Also in the area slated for this year is Moxy Minneapolis Downtown, with 153 rooms in the Ironclad building.

As part of the city’s expansion, Target Center, home of the NBA’s Minnesota Timberwolves, also took the wraps off a $150 million transformation before last year’s Super Bowl. Meanwhile, Allianz Field will debut in the Midway area of St. Paul this spring as the new home of Major League Soccer’s Minnesota United FC. The stadium, designed to revitalize a 34-acre site which includes a 1.5-acre green space to its north, is designed with energy-efficient and sustainable features.

Downtown’s shopping and entertainment strip, Nicollet Mall, now known as Nicollet, underwent a $50 million transformation before the Super Bowl, adding more trees and outdoor art. It is home to the famed statue of Mary Tyler Moore. 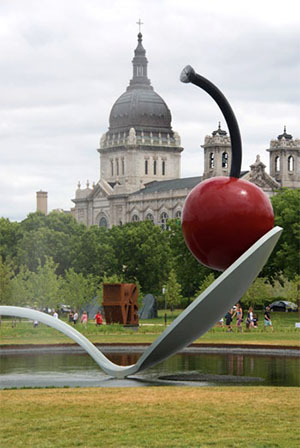 Spoonbridge and Cherry at the Minneapolis Sculpture Garden © MARLENE GOLDMAN

The renowned Walker Art Center, a Minneapolis institution since 1940, sits at one end of Nicollet. Across the street, the Minneapolis Sculpture Garden, expanded and redesigned in 2017, showcases more than 40 pieces, including the signature Claes Oldenburg Spoonbridge and Cherry sculpture.

Upcoming, The Dayton’s Project food hall expects to open this fall in a historic building that was the longtime home to Minneapolis retailer Dayton’s department stores — also the home to the beginnings of Target Corp. In the middle of a $190 million renovation, it boasts more than 200,000 square feet of retail space across three levels. Chef, TV host and entrepreneur Andrew Zimmern and partners list among 40 to 50 total vendors as tenants of a new food hall occupying the street and basement levels.

The city is also currently working on a revamp of Peavey Plaza, slated for completion by July. Added to the National Register of Historic Places in 2013, this plaza on Nicollet, renowned for its Modernist architecture, will include updated fountains and water features as well as improved lighting and will comply with the Americans with Disabilities Act.

Already on board with sustainable initiatives, the Minneapolis Convention Center, which hosted this year’s Final Four Fan Fest, received LEED v4 Certification for Existing Building Operations and Maintenance. The numbers include 60 percent of all waste recycled and four tons of food donated each year, with non-consumed foods donated to local nonprofit organizations like People Serving People.

“The Convention Center did a lot of work the last handful of years changing out LED lights, renovating and looking at sustainability issues,” Montag said. “One of the first things was putting solar panels on the roof.”

Other green initiatives include the growth of the city’s light rail service, Metro Transit, which runs to Mall of America as well as downtown St. Paul and is working on a southwest expansion. Also, the bike share Nice Ride Minnesota now offers dockless bikes, and several companies are providing scooters.

Northeast Minneapolis, filled with old repurposed warehouses that now feature artists’ studios, galleries and live performance spaces, undergoes growth as more buildings, high-rises and people move in. According to Montag, the area offers a lot of new restaurants, breweries and cideries, as well.

The craft beer scene is also taking off in Northeast Minneapolis, including popular spots like 612Brew, with 10 house beers on tap at a time, and Bauhaus Brew Labs. At the same time, the restaurant scene is booming across Minneapolis and its surrounds.

“The food scene has been really developing organically the last dozen years,” Montag said. “It’s almost hard to find a chain restaurant — a lot are owned by local chefs with notable credentials.”

In particular, the North Loop neighborhood has been trending for a while. This month Gavin Kaysen (James Beard Best Chef – Midwest 2018) opens his newest spot, Demi, in a North Loop location adjacent to his popular Spoon and Stable restaurant. Also watch for a new Fillmore Theater and an Element by Westin hotel.

Chef Sean Sherman, whose cookbook, The Sioux Chef ’s Indigenous Kitchen, won a James Beard award for Best American Cookbook, grew up in South Dakota but lives in Minneapolis. He is slated to open Indigenous Food Lab, a nonprofit with a classroom kitchen and restaurant. Sherman and partner Dana Thompson are also developing a new riverfront restaurant as part of the Water Works park on the west bank of the Mississippi in 2020.

Chef Justin Sutherland, a Bravo Top Chef contestant, will move his Pearl & the Thief from Stillwater to downtown Minneapolis in July.

Outside the city, Prince’s Paisley Park, located 20 minutes from downtown, opened as a museum following Prince’s death in 2016. Tours include the studio where Prince recorded his music as well as the stage where he hosted parties and performed live.

One of the easier daytrips from the Twin Cities, roughly 30–40 miles from Minneapolis and 15–30 miles from the St. Paul side, is the town of Stillwater, one of the oldest in Minnesota. Travelers can take either Highway 36 or I-94 and pass through the pastoral St. Croix River Valley. In Stillwater browse antique shops, bookstores and record shops and wander streets flanked with old brick buildings. Other options include crossing the Stillwater Lift Bridge, linking Wisconsin and Minnesota since 1931.

About 55 miles from Minneapolis lies the town of Red Wing, linked by either Highway 61 or 52, passing through the Mississippi River Valley. Attractions include boutique shopping, art galleries and museums, historic homes, the historic St. James Hotel and an antique pottery museum. The town is filled with community and neighborhood parks featuring hiking and biking trails and is also home to Lake Pepin, a 26-mile-long picturesque spot on the Mississippi.