EVEN BEFORE WE SLIPPED our wet-suited bodies into the 72-degree waters of spring-fed Crystal River on Florida’s west coast, a curious West Indian manatee revealed its snout when it approached the platform of our pontoon boat to see what was happening. Our group squealed in delight, and we knew it was going to be a good morning of snorkeling with the manatees that gather in the natural springs in Florida to keep warm during the winter months.

According to the Save the Manatee Club, federal law protects West Indian manatees in the United States under the Marine Mammal Protection Act of 1972 as well as the Endangered Species Act of 1973 and the Florida Manatee Sanctuary Act of 1978. In essence, it is illegal to harass, hunt, capture or kill any marine mammal, including manatees.

How, then, could we snorkel with the manatees in Crystal River? The Federal Government allows passive, in-water observation between manatees and people in Kings Bay, within Crystal River; this is the only area throughout Florida where it is legal to have face-toface interaction with manatees. Prior to boarding the pontoon boat, our tour with the Plantation Adventure Center at the Plantation on Crystal River began with a short lesson and video on how to practice passive observation, with a set of rules to follow once we were in the water. In addition to providing incredible experiences for their guests, the staff at Plantation Adventure Center is just as intent on protecting the manatees and their habitats.

Plantation Adventure Center is not alone in its conservation efforts. This July, Boulder, Colorado-based Natural Habitat Adventures will debut the world’s first zero-waste adventure during its Safari America: Yellowstone Country. The goal of this adventure is to divert 99 percent or more of all on-trip waste; at the end of the trip, the eco-conscious travelers should be able to fit all waste produced into a single small container. 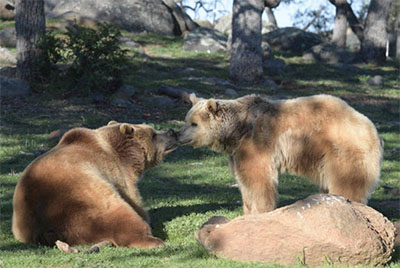 “I know saving the world may seem a bit of a hyperbole, but I truly think through our actions and inspiration, that’s exactly what we’re doing. And we’re in a unique position in the industry and world to have disproportionate impact for good.”

Biosphere Expeditions, a nonprofit wildlife conservation organization with offices in Australia, France, Germany, Ireland, the U.K. and the United States, leads trips around the world through which citizen scientists participate in wildlife research alongside scientists. Options range from studying whales, dolphins and sea turtles in the Azores to Arabian oryx and Gordon’s wildcats in the Dubai Desert Conservation Reserve, from observing elephants in Thailand to snow leopards in Kyrgyzstan. With many more expeditions from which to choose, there are myriad ways to participate, regardless of age and background. And according to Biosphere Expeditions, two-thirds of contributions benefit the projects directly.

When it comes to Biosphere Expeditions’ impact on conservation, Dr. Matthias Hammer, executive director, says, “‘What pays, stays’ is a phrase frequently used at the interface of wildlife conservation and tourism. There are examples the world over where tourism has kept poachers, chainsaws and other destructive influences at bay. … Our citizen science expeditions are no exception, and some of our best staff are converted poachers now turned into linchpin conservationists.” 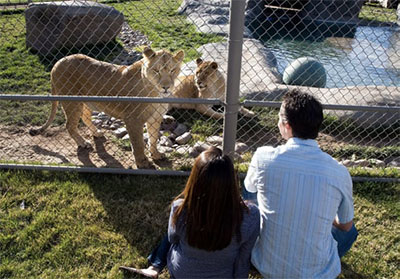 Closer to home, Lions Tigers & Bears in San Diego houses animals that have been rescued from the exotic animal trade, the source of tremendous animal neglect and abuse in the United States and globally. While no direct human contact is allowed for the safety of people as well as the animals at Lions Tigers & Bears, visitors have the opportunity to participate in the Feed a Wild One experience, wherein they feed the animal of their choice, and behind-the-scenes visits incorporate opportunities to learn about and feed a number of animals. For a more immersive experience, guests can reserve the on-site luxury two-bedroom suite with private patio overlooking a three-acre lion habitat.

“Education is the key to helping animals,” says Bobbi Brink, founder and executive director, Lions Tigers & Bears. “There is not enough sanctuary space in the world to save all the exotic animals in need. Ultimately, our ability to improve the welfare of captive exotics relies on raising public awareness.”

In addition to providing rescue and life-long care to rescued animals, Lions Tigers & Bears is working on legislation and advocacy to help protect animals and end private ownership of apex predators.

Germany-based Green Pearls’ mission is to make eco-friendly destinations and accommodations, as well as authentic experiences, more visible worldwide. The organization works with hotels that have initiatives to support the welfare of animals on land, in the air and in the oceans. In Thailand, Keemala Resort & Spa maintains a strict policy against the exploitation of animals and encourages guests to avoid activities that exploit animals for tourists’ entertainment.

“Nature plays such an important role in every aspect of Keemala, from the surrounding forest to the waterfalls and rescued animals that call Keemala home, that for us it was only natural to extend this sense of responsibility outward in [the] form of our commitment to environmental sustainability and ethical tourism as well,” says Samornpun Somnam, executive director. 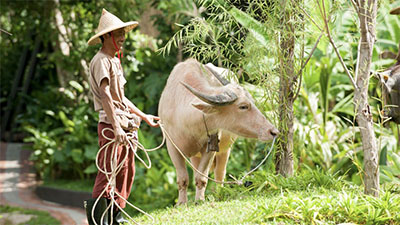 “We choose to offer a variety of culturally enriching and holistic lifestyle activities that give insight into the local way of life. Guests who still wish to interact with wildlife are recommended alternative, meaningful experiences such as visiting a sanctuary where they can better appreciate the wildlife that we have in this region without further harming the welfare of these precious animals, particularly endangered ones whose lives are already so precarious,” Somnam adds.

Fashionable, eco-conscious travelers can show their support of endangered animals with pieces found in the Tiffany Save the Wild Collection from Tiffany & Co. Launched in September 2017, the collection features elephant, rhinoceros and lion designs, with 100 percent of the profits donated to the Wildlife Conservation Network. Tiffany & Co. has made a total commitment of $4 million by December 2019.

“The Tiffany Save the Wild Collection’s success so far truly underscores the increasing demand for luxury that makes an impact,” says Anisa Kamadoli Costa, chief sustainability officer, Tiffany & Co. “For over 180 years, Tiffany & Co. has been inspired by the beauty of the natural world. For this reason, we believe we have a moral imperative to protect it — and our customers are validating this belief with each purchase.”

Stefany Seipp, founder and CEO, Green Pearls, summarizes the philosophy behind conservation travel perfectly: “We owe this world to future generations. We need to act now; there is no ‘Planet B.’ Without the oceans there is no life, no blue, no green. It is our common responsibility to protect and conserve the planet.”