The starter, a nice gentleman, told us we were in for a treat. The East Course was jammed with an outing of once-a-year players. He directed us to the “private” West Course, saying something like, “You’re gonna thank me” over and over … hinting at a tip.

The highly regarded West Course ranked among Golf Digest’s Top 20 Golf Courses in New Jersey, though that might have been a few years ago. Designed by Steve Smyers, the course opened in 1998. It’s now threatened by a Toll Brothers housing development which would retain 18 holes of Royce Brook and develop the balance into high-value homes, to be called The Enclave at Royce Brook. If you want to play this course, this year might be the best time before the dozers have their way.

Frankly, the day we played, the West Course should have been deemed unplayable. Many holes appeared in the midst of sod replacements, and muddy water filled bunkers. Much of the newly planted sod had washed away, exposing reddish-brown soil. Trap drainage seems to be a consistent complaint among players, and many township residents have concerns about the effect of the pending development on overall drainage.

After surviving a near-catastrophe on the first hole, almost falling into the greenside trap and encapsulating my trendy blue golf shoes in red-brown mud, I was ready to make amends. I spent a few minutes wiping the mud off with my golf towel, which I discarded at the end of the round. “Unsavable!” said Yammi.

I secured a decent drive left and forward of the fairway traps. Stay away from the traps, as you’ll never find your ball in the muddy water. Yammi followed me not too far left, leaving himself with a difficult shot to the green. Mark landed in a trap and, unable to find his ball, was awarded a free drop. The free drops became a scoring advantage throughout the game, providing the ball a far better lie. I hit the green in regulation, saving par, but Yammi and Mark were not that lucky. 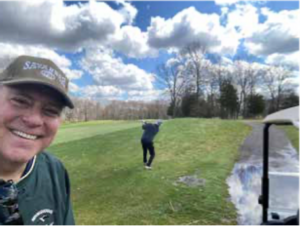 The No. 1-ranked handicapped hole on the course, this slight dogleg right features a grouping of fairway bunkers inside the elbow of the turn. Four elongated traps surround and protect the green, and, of course, muddy water filled them all. This turned out to be our disaster hole, with double bogeys for the three of us. If this hole survives the pending bulldozers, we would like a redo!

This nice finishing hole features a clear view of the clubhouse in the distance but also a jammable bunch of traps short and on the right — just long enough to catch a miss-hit drive but short and right enough for a decent play to clear them. The perfect aim is over the third trap on the left, staying slightly left on the fairway. I feathered a drive right to left, landing in great position. Yammi made his best drive of the day, straight over the third trap. Mark took out his 4-iron and hit surprisingly high and far, too. We were all in great shape and could taste the hot dogs and beer ready for us at the turn. Yammi and I made it to the green in regulation, but Mark landed just short. He secured par with a chip and a putt, and we two-tapped in to join him.

From the tee box, the hole appears to sit on the left but actually tucks into the right side. Traps lie forward of the green, also proving a little deceptive. After a string of bogeys on the previous three holes, we were ready to make a move. Yammi ripped up the rulebook and drove a low “screamer” to the left side of the fairway. Had this been a dry day, he might have made the traps. Mark went a little wild and weak, landing near the muddy cart path. (He later had to use a tooth- brush to clean the mud off of his suede golf shoes.) I, in turn, followed Yammi with a higher-than-expected drive, losing some distance but in a good posi- tion. From here I rolled up to the green, just on the collar. Yammi had a textbook shot, rolling up to the cup for a birdie. Mark rescued himself out of the mud and onto the green. Retribution was served!

Maybe mud and repairs are a good thing. If everything was luscious and green, I would most likely not have birdied the final hole at Royce Brook West. Off the tee, we all hit monster drives, but our second shots separated the men from the boys. Mark’s fairway iron (he favors his 4 over the woods) careened his ball right and into trouble. Yammi hit his 3-wood hard and left, landing short of an opposing tee box left of the green. I went left but not as far and bounced and rolled in some under-construction hardpan, ending up in the greenside “bunker” that was flat, level and stony but with no water. I took my putter and firmly smacked the ball out, rolling and skipping through some rough to the green. I then tapped in my 10-foot putt for birdie. Yammi made it out of his predicament and proudly announced his par. Mark did well, scoring a bogey. We shook hands, and I declared the course unplayable!