One of the best parts of traveling around the world is sampling local specialties. Whether you embark on a street food crawl in South Korea, snag a coveted table at a Michelin-starred restaurant in Japan or anything in between, you’ll likely come across ingredients, dishes and preparations that are unfamiliar … and maybe a bit off-putting. Our advice? Remember that adage about “when in Rome.” While some of these delicacies admittedly are not for the faint of heart, travel is about stepping out of your comfort zone. Bon appétit!

A national dish in Iceland, hákarl is a delicacy made by curing a certain species of shark and hanging it out to dry for several months. During that time it picks up an intense aroma of ammonia and a strong fishy flavor that makes it an acquired taste. Enjoyed all year, hákarl is most often served during the midwinter Thorrablot (þorrablót) festival. Pro tip: It goes down a lot easier with a shot or two of Brennivin (nicknamed “Black Death”), Iceland’s signature spirit, similar to aquavit.

Prized in China and Hong Kong for the rarity, flavor and high protein levels, edible birds’ nests consist of the solidified saliva of swiftlets. While the nests can be cooked into a congee or added to an egg tart, the most common way to serve them is dissolved into a soup, where they take on a silky, gelatinous texture. Chefs must take care not to add any strong flavors, however, as they overpower the delicate taste of the nests. Some people also tout the skincare benefits of consuming birds’ nests, as the collagen content urportedly staves off wrinkles. However, at $3,000 per pound, it might prove more cost-effective to purchase a designer jar of anti-aging cream. 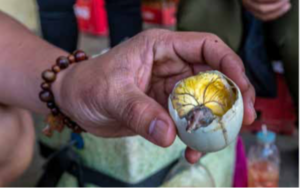 A popular street food in Southeast Asia as a cheap source of protein and calcium — especially in the Philippines, Vietnam and Cambodia — balut features an interesting taste, texture and appearance for the unfamiliar (or squeamish). To make it, a fertilized duck egg is incubated for 14 to 21 days before being steamed and cracked, when diners eat the contents directly out of the shell. The longer the incubation period, the more developed the embryo, including soft bones, feathers, a beak, eyes and other recognizable features. Not for you? Maybe stick with a few scrambled, unfertilized chicken eggs.

A massive, bumpy-skinned fruit from a tree native to Borneo and Sumatra, durian enjoys particular popularity in Indonesia, Singapore, Malaysia, Thailand and Vietnam. You may find its custard-like texture and flavors of creamy vanilla, almonds and caramel quite delicious — if you can get past the pungent aroma, which some describe as a combination of sewage and rotting onions. Though durian has many devoted fans in Southeast Asia, its strong odor can linger for several days, leading some hotels and public transportation to ban the offensive produce. 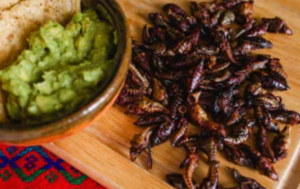 Nary a bivalve can be found in the quippily named Rocky Mountain oyster. The appetizer consists of bull testicles that are skinned; coated in flour, pepper and salt; and deep-fried, then served with lemon and cocktail sauce. Believed by some to be an aphrodisiac, the dish is called prairie oysters in Canada, where they are generally served with a demi-glace, and criadillas in Argentina, Spain and Mexico. In the United States, Rocky Mountain oysters are popular at festivals or sporting events; true fans can devour them to their heart’s content at so-called “testicle festicles” like the one in Eagle, Idaho, which claims to be the world’s largest.

While it doesn’t take 100 years, the process for creating Chinese century eggs may take up to 100 days. The traditional method mixes chicken, quail or duck eggs in a combination of ash, salt, quicklime, clay and rice hulls for up to several months. During that time the yolk morphs from yellow to dark green or gray and takes on a strong flavor from the ammonia and hydrogen sulfide generated, and the white changes to a dark brown jelly with a salty tang. Today the process is often sped up by soaking the eggs in table salt and other ingredients and then wrapping them in plastic wrap.

Never mind what you heard about eating the agave worm at the bottom of the mezcal bottle. The real insect treat in Mexico and Central America is chapulines, harvested from May through the summer, then toasted or fried and seasoned with garlic, lime, chilies and salt. Chapulines are most popular in Oaxaca, served by vendors as a street food and at sporting events. A bowl of the addictively crispy, salty, spicy bugs also makes for a perfect bar snack, especially when paired with a margarita or a flight of mezcal. 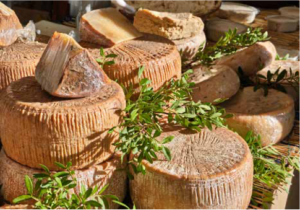 Turned off by bleu cheese because it actually contains mold? Then you might want to steer clear of this Sardinian delicacy. The production process for the sheep’s milk cheese called casu martzu entails introducing the larvae of a cheese fly which hatch and begin to eat the cheese, speeding up fermentation and breaking down fats. The cheese becomes creamy-soft with some liquid actually oozing out, and the maggots remain. Sardinians only consider the cheese safe to eat if the maggots are still alive, though they may refrigerate it to kill them quickly. Casu martzu gives new meaning to the cheesemaking term “active cultures.”

Increasingly becoming a sought-after ingredient among modern Mexican chefs, huitlacoche is actually the byproduct of a plant disease called corn smut. Corn plants affected by a fungus form growths that are harvested while still young, preserved and sold for much more than corn unaffected by the disease. Emitting a savory, earthy, mushroom-like flavor, huitlacoche is used as a filling for quesadillas and enchiladas, in soups and salads, and as a garnish. The term “Mexican truffle” sometimes appears on menus for diners who don’t care to associate the tasty ingredient on their plate with a disease.

Feeling lucky during your trip to Japan? Then take a chance on fugu, a pufferfish which relies on the deft, talented hand of the chef preparing it. If any toxic parts remain and contaminate the meat, it can lead to tetrodotoxin poisoning, which can cause dizziness, difficulty breathing and even death. Japan takes this danger so seriously, it controls fugu’s availability in restaurants by law, and only chefs with at least three years of intensive training are qualified to serve it. Once deemed safe, fugu is most often served as thin slices of sashimi, though it can also be smoked, fried or cooked into a soup.

If you like your seafood ultra- fresh, it doesn’t get much fresher than a dish of san-nakji, served in Korea and Japan. Small, long-arm octopuses are killed, cut into small pieces and immediately served drizzled with sesame oil and sprinkled with toasted sesame seeds. Diners must chew quickly and vigorously. Because not all of the nerve endings receive the message the creature is dead, some pieces squirm around the plate — that might also describe first-time eaters’ motion in their seats. Sometimes the octopus is eaten whole and alive, leaving the diner to literally fight nature to swallow it. Be aware this can be a risky dish to consume, as the suckers of the tentacles remain active and have been known to stick to people’s throats, causing death by choking. The risk increases substantially when the octopus arms are cut into larger portions or when they are eaten whole.