TRUFFLES. YOU’VE SWOONED OVER THEM, stirred into scrambled eggs, layered in foie gras, thinly sliced atop a pizza (ideally in St. Moritz) and folded into the skin of a perfectly stuffed, oven-baked fowl prepared by a chef looking quite like James Beard. But you haven’t really tasted a truffle until you’ve seized it from the large, meaty, soil-flecked hands of a French truffle hunter, his palm holding the misshapen, dirt clod-like fungus toward you, his other hand wrapped around a prodigious knife — and his proud, truffle-finding canine beaming at his side.

Near Narbonne, in the Languedoc, close enough to the Mediterranean to sense a briny perfume in the air, I join former professional rugby player Gerard Bertrand at one of his family-owned vineyards. To celebrate pruning season, he’s invited some friends to frolic on the scrubby, limestone-flecked, garrigue landscape where herbs like rosemary and lavender grow wild. His vineyards, neatly rowed and flanked with cedar and oak trees, draw the eye. But as we roam the hilly expanses with Bertrand’s vineyard-ensconced hotel, Château L’Hospitalet, just behind us and the sea visible on the horizon, we aren’t at this moment obsessed with wine or nipping vines at all.

Rather, following a dog and his keeper, Philippe Barriere (the Languedoc’s official truffle inspector, who sports the good looks of Gaston from Beauty and the Beast), we clamber across hill and dale. At last the dog, deftly trained to root out mature truffles, stops at a tree. As we approach, he barks maniacally and starts to dig. Within seconds, he unearths a black truffle the size of a lemon and drops it into Barriere’s hand, exchanging it for a treat. “We had to stop using pigs here in France,” Barriere says. “They crave truffles so much, we found they’d rarely relinquish their treasure. Dogs just want their biscuit!” Wide-eyed, taking in the musky smell of the truffle, imagining its umami delights, I empathize with the truffle lust of those truffle-seeking pigs. 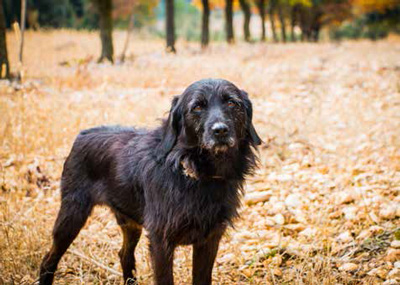 The use of animals is also preferable to another practice: raking. Hunters would use iron rakes and rip out several feet from the tree trunk, an indiscriminate practice that damages the forest floor and ecology. Additionally, every year the French Federation of Truffle Growers commits to planting at least 300,000 trees they hope will yield truffles, both an environmental boost and an aid to help the declining French truffle industry, which some critics claim could be a result of climate change.

Like nature’s artwork, truffles, subterranean tuber-like mushrooms often found six to eight inches beneath the ground near tree roots, come in all shapes and sizes. Since antiquity, people have attempted to domesticate them. But, generally, truffles have a mind of their own and grow when and how they like. Most prized, more subtle in flavor, considered an aphrodisiac and a favorite of royalty in Renaissance times, the black truffle hails from France (and some other parts of Europe). Also delicious though stronger in taste, the white truffle remains a standout of Italian cuisine; it’s found in the Piedmont and Alba regions. (You may have heard about the 4.16-pound white one unearthed in Italy last year that sold at Sotheby’s for around $61,000 to a phone bidder from China.) Garnering upwards of $600 a pound, black truffles, like the one Barriere slices for me here, are meant to be used sparingly — though I believe I could eat the whole stone-like chunk if given the chance. I’m sure that wouldn’t be prudent.

Back at Bertrand’s hotel, we stand in the kitchen, our found truffles piled on the counter like black gold. Exhilarated by our efforts — though the dog did all the work and Barriere authenticated the fungi — we huddle, sipping Bertrand’s organic wine, an elegant blend of Chardonnay, Viognier and Sauvignon Blanc. Barriere washes the truffles then slices them paper-thin. He hands me one, telling me to drizzle it with olive oil and sprinkle it with sea salt. I nibble it plain first. It’s crisp, like an apple. It tastes the way rain smells. When I pair the next slice with Bertrand’s Domaine de Cigalus White, I feel l’art de vivre like a serenade to my soul. Oh, yes. This is the truffle life.

In France, the nexus of truffle-dom lies in the Périgord — today known as the Dordogne, a region in southwest France. Truffles grow abundantly, too, in Provence and the Languedoc. Gourmands won’t want to miss the field-to-fork fun of traipsing through the countryside with a truffle hunter and his dog. Though a truffle quest has never been a touristic activity, many hotels in the region can arrange the adventure, and some outfitters offer an organized truffle outing. Try Les Pastras, an organic Provençal farm and culinary tour company that conducts truffle-hunting tours in summer and winter seasons, with a grand finale tasting.

Visitors to Provence can fly into a variety of airports, including Avignon (AXN) or Nice (NCE). For the Languedoc, Montpellier (MPL) provides easy access to the region, and for the Dordogne, Toulouse (TLS) allows for super connections. Some travelers enjoy taking France’s efficient trains. A fast one, the TGV, will take you from Paris Charles De Gaulle Airport straight to Avignon.