These improvements attract an increasing number of conferences and exhibitions to the city. The International Congress and Convention Association noted the 103 international conventions held in 2016, up from 82 in 2015, made Buenos Aires the top MICE destination in Latin America. This figure is expected to rise with the opening of a new convention center, expanded hotel capacity and the lifting of regulations that limited international flights to the country. New and resumed international air routes have already been approved, including United Airlines’ resumption of daily, non-stop service to Buenos Aires from New York.

The $70 million Buenos Aires Exposition and Convention Centre opened in 2017 in vibrant Recoleta, close to many of the best hotels, attractions and public transportation. The LEED-certified complex comprises three underground levels, a large rooftop garden and integrated solar panels that comply with the city’s highest sustainability standards. Numerous bus lines, 900 parking spaces and, soon, a new underground subway station ensure excellent transportation options from all areas of the city.

With more than 193,000 square feet of exhibition space, the structure accommodates up to 5,000 delegates. The main auditorium is partitioned into three separate spaces, with a second auditorium available as well as a gastronomic hall, machine room, press room, storage space, administrative offices and additional work spaces. In October 2017 The Smart City Expo World Conference inaugurated the structure, attracting more than 15,000 visitors over three days.

Business and leisure travel to Argentina has been so strong, hotel occupancy increased by 10 percent from the third quarter of 2016 to 2017, according to the hotel research firm STR. Convention center and event calendars in Buenos Aires were full in September, October and November 2017 with corporate and association events, a tennis tournament and a rugby match with New Zealand. As of Jan. 2, 2017, the Argentinean government exempts all foreign tourists from the accommodations tax of 21 percent.

With a population of close to 3 million, and more than 12 million in metro Buenos Aires, local Porteños are proud of their Spanish heritage. The birthplace of tango, the city boasts world-class opera, theater and art, with well-preserved European-style architecture and restaurants serving Malbec wines from Mendoza and cuts of beef fresh from the pampas. Each neighborhood has its own colorful streetscapes with outdoor cafés, murals, green fútbol pitches, and late-night tango clubs in historic districts. 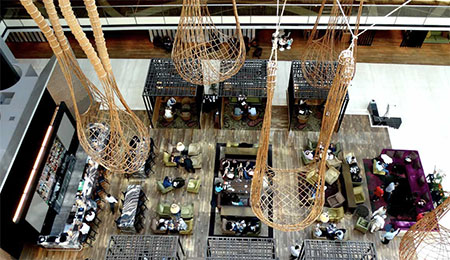 The newly renovated 417-room Hilton Buenos Aires provides the most convention and meeting space of any city hotel, with 32 meeting rooms and 72,290 square feet of function space, including 22,000 square feet of exhibit space for up to 2,700 persons. The hotel is located on Puerto Madero, a manmade island connected to downtown by several bridges, including Santiago Calatrava’s stunning Puente de la Mujer. Puerto Madero is a trendy and pricey oasis of deluxe hotels and restaurants, soaring office and residential towers and a marina.

The newest deluxe property, the Alvear Icon Hotel & Residences, offers 159 guestrooms and suites and a bar/restaurant on the 33rd and 34th floors with 360- degree views. There are six dining venues, eight small meeting rooms and a heated pool with a retractable roof on the 19th floor. Across the street, the Faena Arts Center in a historic industrial building is great for off-site events.

The Brick Hotel – MGallery by Sofitel in Recoleta boasts 175 guestrooms and suites and a lobby and restaurant splashed with colorful paintings by South American artists. Seven divisible rooms host meetings, private catering and social events for up to 400 people.

All the Recoleta hotels, including the Palacio Duhau-Park Hyatt (165 rooms and suites; 9,170 square feet of event space) and Four Seasons (97 rooms, 49 suites; 11,528 square feet) are within walking distance of the new convention center.

One of the larger properties for events is the 742- room Sheraton Buenos Aires in the San Martin district, between Recoleta and Puerto Madero. With total event space of 70,000 square feet and 15 meeting rooms, its largest room measures 14,000 square feet.

The Viceroy Buenos Aires, to open in 2019, is the only hotel planned for Madero Harbor, with 125 guestrooms and 30 residences. Guests will enjoy proximity to a shopping center with 120 retail outlets, restaurants, nightlife, cinemas and a heliport.

Bring your group to one of the tango shows that fill a dozen city theaters every night. The Carlos Gardel Theater, named after Argentina’s most famous tango singer of the 1920s and 1930s, offers dinner and a 90-minute show sure to impress even the most jaded traveler.
esquinacarlosgardel.com.ar