THE FIRST FULL MOON BATHES the night sky across Taiwan. That’s when the Island of Formosa, meaning “beautiful island,” takes on a whole new vibe.

It’s as if this cosmopolitan hub of speed trains, night markets and the world’s tallest green building shifts into low gear. Why wouldn’t it? The annual Lantern Festival has arrived.

As jetsetters from mainland China and international wanderlusters hit the urban streets to partake in an ancient Chinese invention dating back more than two millennia, the glowing bulbous paper lanterns drift like hundreds of jellyfish toward the stars. While the interpretations of the lantern release changed over the centuries (originally military-related, later the lanterns became symbols of hope and prayer released by farmers in spring), witnessing these brilliant beacons is a bucket list-worthy phenomenon not to be missed.

“The sky lantern is considered culturally and historically significant in Taiwan, and many find it touching and even romantic as people write their dreams and wishes onto the lantern to release in the night sky, hoping it would come true,” says Stella Ying at the Regent Taipei as she shows a guest the small in-room lantern placed in all the rooms over the weekend. It’s just one of the complimentary tokens provided to guests staying at this luxury hotel during the Lantern Festival.

Held on the first full moon of the Chinese Lunar New Year, the festival pays homage to hope and new tidings through hubs across Taiwan, with a special nod, of course, to the animal revered in the Chinese zodiac. Ever since the Tourism Bureau of the Ministry of Transportation and Communications in Taiwan resurrected the festival in 1990, the celebration has been a crowd-pleaser. While the country declares one county as the mother ship of the Taiwan lantern festival, other hubs also ring in lantern parties in the most delightful ways.

Get ready for a special ode to the lantern in the Year of the Dog. Here are two not-to-miss places for this bucket-list party.

High in the cloud forest in Chiayi County, home of the famous sunrise on the Alishan Mountain Range, festival goers reach heavenly elevations for the Lunar New Year cheer. This year’s Taiwan Lantern Festival, March 2–11, unites three of the five elements — water, land and air — into one uplifting lantern theme.

Besides the mountain experience, lantern festival attendees celebrate in Taibao City along a downtown stretch that culminates in merriment around the futuristic southern branch of the National Palace Museum. Hailed as the turf of the smart Taiwan Lantern Festival, this event promises to break away from traditions. Discover waltzing water displays with familiar architectural patterns of the Forbidden City, Alishan Mountain and cherry blossoms at the “water” light district.

The “air” lantern zone puts participants in touch with the Chiayi lantern exhibitions via apps accessible from their smartphones. A virtual world of LED light frequencies beams other brilliant “land” images. By the National Palace Museum, for instance, see branches of magnolias adrift in the air. As part of the interactive installation, visitors can even “water” a virtual plant and watch it grow. 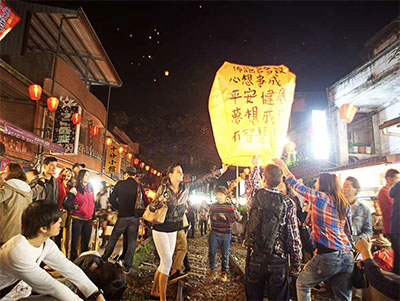 Another lantern experience awaits in Pingxi where, come sunset, crowds converge at this shrine to the lantern located in a part of New Taipei City surrounded by mountains. Residents of Pingxi originally released sky lanterns to let others know the town was safe. Dedicated scribes to the art of lantern making can now create their own artful lantern with a wellness note, then join the others in this lantern release party. More than 1 million sky lanterns blaze across the night sky.

An hour’s drive east from Taipei, the old coal boom town is a 1920s throwback with period-set architecture, especially around Pingxi Old Street — itself a spectacle. The street, built into a hill with a train track overhead, immerses visitors in a surprise setting that swirls in shops and charming wooden houses constructed during the Japanese occupation. But come nightfall, the mood morphs into wonderment. And there among the pack of wellwishers, guests from the Regent Taipei hold their personalized lanterns created only a short time before. For this delegation of lantern bearers, not a minute is wasted as they leave their luxe suites in dizzying Taipei, led by a private butler to Pingxi for the ultimate sky lantern tradition.

By the glow of a Taiwanese full moon with necks cranked skyward, all watch their dreams take flight.