Engage Business Contacts with Culinary and Cultural Adventures in Glasgow

Glasgow, or Glaschu in Gaelic, meaning “Green Glen,” traces its development back to A.D. 550 when Saint Kentigern arrived to establish a religious community. Fast-forward about 600 years to 1189, when it was granted the right to hold an annual fair; 800 years to 1350, when it built the first stone bridge over River Clyde; and 900 years when Glasgow founded its first university in 1451. Needless to say, Scotland’s largest city has been welcoming visitors for centuries.

Today’s international travelers to Glasgow likely arrive at Glasgow Airport, just 15 minutes from the city center via Glasgow Airport Express bus; one-way fares are £8.50 (about $11.50). Taxis (about £45, or $60) and private cars (about £60, or $81) are also available, making transit from the airport to your first meeting of the day seamless. Alternatively, fly into Edinburgh Airport and take an hour’s shuttle ride west. If you are already in the United Kingdom, consider the 4.5-hour train ride from London.

Once within the walkable city center, the subway offers the easiest way to get around, and First Bus Glasgow operates more than 80 routes across the city. Want to take in the fresh air? Hop onto one of OVO Bikes’ or Nextbike’s bikeshare rides and get a different perspective of the city. If your business takes you to other areas of Scotland, ScotRail proves a terrific option to get you where you need to go.

Accommodations in and around Glasgow run the gamut, from castles and historic places to trendy spots and healthy retreats. Live like royalty at Crossbasket Castle, a 17th-century luxury hotel, or spend the night in a tower suite at The Sherbrooke Castle Hotel. Rock ’n‘ roll royalty like The Beatles and The Rolling Stones stayed at voco Grand Central Glasgow, an IHG Hotel, attached to Glasgow Central Station; and four stars shine bright just north of the city center at the new Maldron Hotel Glasgow City. Relax after a long day’s work in the new La Chambre Verte at Kimpton Blythswood Square Hotel, an immersive overnight experience that surrounds you with greenery and sound therapy.

Once you’ve recharged and are ready to take on the world, start your day with breakfast at Café Strange Brew in Glasgow’s Southside neighborhood. Indulge in the popular pancakes, which you can order with sweet toppings like poached rhubarb, blood orange or granola, or on the savory side with spring onion and chili, buttermilk chicken and a fried egg. A recent special featured a duck hoi sin pancake. If you’re in a hurry, stop instead at Sprigg for a takeaway of barista-brewed coffee and healthy bowls on the go.

Private meetings over lunch are de rigueur in the business world, and one place you’ll want to make reservations is Ubiquitous Chip, serving Glasgow’s West End for 50 years. Here you’ll dine on Scottish and vegetarian dishes made from inventive, seasonal, locally sourced and foraged ingredients. Another spot to try is The Citizen, housed in the old offices and printing rooms of the Glasgow Evening Citizen newspaper. Try Citizen steak pie and the chicken Balmoral with haggis mousse. For a culinary adventure with a colleague or client, join Eat Walk Glasgow and eat and drink your way across the city.

After work is done for the day, it’s time to let loose. Glasgow was the U.K.’s first UNESCO City of Music, so it’s safe to say the city offers plenty of venues to take in live shows. The Clutha Bar, with a history reaching back more than 200 years, features live music every night; right across the street, The Scotia, founded in 1792, welcomes musicians every Wednesday through Sunday. For traditional Scottish bars with live music, pop into The Ben Nevis Bar, The Snaffle Bit, The Islay Inn and The Park Bar, all in the Finnieston area of the city. Or try Mono, a vegan café that doubles as a music venue popular with new acts. 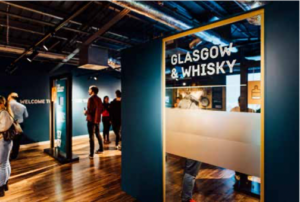 If you’re ready to celebrate the big deal you just signed, why not toast with a dram of a local pour? There are more than 130 whisky distilleries throughout Scotland, and four of them are close to Glasgow. Enjoy tours and tastings at The Glasgow Distillery Co., The Clydeside Distillery and Auchentoshan Distillery, established in 1823 in nearby Clydebank and the only distillery in Scotland to practice triple distillation. Rum drinkers may opt for Wester Distillery, an independent micro-distillery in the West End.

To discover a different side of the city, join Walking Tours in Glasgow for a local’s view of the vibrant street art. Play another tune with Glasgow Music City Tours, which takes music lovers to some of the city’s best venues. If a business golf outing is on the agenda, Scotland boasts more than 600 courses throughout the country, including more than 50 in the Glasgow area alone. Not too far from the city visit famed championship courses like Gleneagles and Prestwick, the original site of the Championship Open.

Scotland is known for its sweeping landscapes, craggy mountains, rugged coastlines, outlying islands and tranquil lochs. If you have time to venture outside of Glasgow when visiting for business, get a terrific taste of all the country has to offer less than an hour away: Loch Lomond. The largest inland stretch of water in all of Great Britain sits in the middle of the Loch Lomond & The Trossachs National Park, surrounded by villages and rolling countryside. The nature break will have you reenergized and ready to tackle another day.