If North Port, Florida, sounds familiar, it is likely due to the disappearance and murder of Gabby Petito last year. Brian Laundrie, her fiancé, ended his days not far into the Carlton Reserve, part of Myakka River State Park. The park is a mecca for hiking, kayaking and spotting animals like alligators and birds. Heron Creek Golf & Country Club lies south of the park in a residential community.

With Heron Creek’s three nine-hole courses — Oak, Marsh and Creek — players can easily switch up the combinations to make distinctly different 18-hole layouts. Ohio native Arthur Hills, who died last year at age 91, designed Heron Creek. Designing more than 200 courses, many in Florida, Ohio and Michigan, Hills believed in risk and reward holes. I looked forward to playing with a good friend, George Hofmann, and his son, Cole. George and I together ran the Leukemia & Lymphoma Society Red & White Ball in Philadelphia, raising millions of dollars for LLS through the generosity of our airline and hotel friends at Global Traveler. 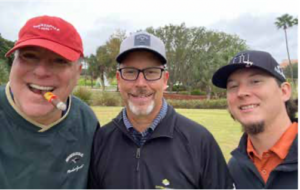 Like many during the pandemic, George relocated to Florida’s West Coast, settling in Cape Coral to enjoy the weather and outdoor activities. Heron Creek proved the perfect location to meet, with me coming from Sarasota and George from Cape Coral.

It was a cold day with a chance of light rain, which we saw in the early part of the game, making for a nasty start on a long and difficult par 5. Arthur Hills would have laughed to see us in action. On this dogleg left, an elongated pond runs along much of the fairway’s left side. George duffed a shot short, while Cole hit a fantastic drive center. My ball looked as if it would skip into the thick line of trees on the right, but it rolled nicely to land right of the cart path, about even with Cole and in a good position for my second shot. With my 3-wood I sent the ball sailing but farther right than anticipated. The hole has lots of moguls and feels a little Scottish in design. I continued favoring the right side, which meant I did not land on the green in regulation but putted out for a bogey. Cole joined me with the same score, and George took a “snowman” 8. A lackluster start to a cold, wet day.

The tee box sat behind a large pond which we had to carry to reach the fairway, and it seemed the farther right you aimed, the longer the pond extended. With a slight gust in the air, we drove our tee shots; one by one they looked as if they would clear the water but were knocked down by the wind. We decided to reshoot — since the group in front was playing slowly, we had nothing to lose. George went in the drink and decided to advance to the kindly placed ball drop area. Cole cleared the pond, taking a left aim. I replicated Cole’s plan and shot over the water, hitting the left bunker but jumping out. For my second shot I hit a nice 7-iron, landing a little short but rolling off a downside hill near the green to within eight feet of the cup. Unfortunately, I missed the putt but was happy with my redo par.

Closing out the first nine on the Oak, we were pleased the wind died down and the rain stopped. At one point I had been tempted to change out of my shorts into my back-up emergency long pants, but I held firm.

The ninth hole is another dogleg left with a pond edging the left side but is flat as a prairie, with houses on the left across the pond. Any severe duck-hooks and we would be buying new window panes. I kept my calm as George caught the water and Cole sailed right but in play. I drove toward the two right bunkers but stayed in the fairway. From here we all limped toward the green, with George and Cole adding up penalty shots and miss-hits. I made it to the green in four and two-putted for bogey, just fine for the ninth.

Moving on to our next nine, the weather had improved but the pace of play had not. The ranger said he might force the group to skip a hole. We wondered, why wait? Three holes were open in front, and the group behind us planned to play all 27 holes, and they were going to miss their tee time. Pace of play is the first rule of golf; the second is: Whoever hits the shortest ball should be at their ball before all others. As we had a little time, we decided to wager on the holes and started a dollar-per-hole game to get our competitive juices flowing.

This demanding par-5 dogleg right has areas of brush and fairway sand traps. After George and Cole made decent drives, my line drive came just short of the bunkers. My second shot with my 3-wood stayed on the right, clipping a tree and landing behind a trunk. All I could do was get out and flip up the ball, avoiding the large sand trap. No great scores at the start of the competition: A pair of double bogeys between me and Cole resulted in a carry-over, making the hole worth $2.

Off the tee you need to negotiate your way around wetlands on the left while staying inbounds on the right. The rest of the team hit equally good drives; George and Cole seemed to have their mojo back. My approach was spot on, landing squarely on the green, which made the boys a bit nervous. Cole also had a clean shot to the green and we both carded pars, pushing the wager again. Make sure you avoid two bunkers on the right short of the green — they proved the ruin of George.

Cole held the lead, and I suggested we make the final hole double or nothing. If either George or I won, the debts would be erased. Game on!

I drove my ball right and into an overgrown section behind a little tree. George said I could never hit the ball, and I said, “I will pretend the tree is not there.” I hit a great 7-iron shot but landed just short of the green. George was behind me and took a shot, more of a placement to the fairway. Cole drove over the marsh toward the green, which lies in direct position from the tee box over the water. Miraculously, he made it. When we were all on the green, it was anyone’s guess who would win. Cole and I two-putted, but George made a long putt to clear our debts with Cole. What a guy, and what a day at Heron Creek!