Ask most Charlotte locals their histories and you’ll notice a common trend: Charlotte is a city of transplants. The fifth fastest-growing U.S. city in terms of population, with 2.6 million residents living in the Charlotte area, people flock to the Queen City. Many now-locals were once visitors who saw something they liked and decided to stick around. Some found themselves in Charlotte as a matter of business, brought along when a company from elsewhere set up shop in Charlotte’s skyscraper-laden Uptown.

The trend isn’t slowing. Businesses and employees alike are finding homes in Charlotte.

“[The] people that want to live here are the same people that companies are looking to hire …” said Tom Murray, chief executive officer, Charlotte Regional Visitors Authority. “When companies make decisions to relocate headquarters, they want to see a vibrant, active urban core. They want a place where their younger employees will want to travel, [and] we see the tourism industry playing a really vital role in economic development.”

For Murray and his team at the CRVA, Charlotte’s tourism and economic success go hand in hand … and not just because one in nine locals work in the tourism or hospitality industry. In Charlotte, business attracts travelers and vice versa.

“We’ve always had [a] very strong business travel [market],” said Murray. This is partially thanks to Charlotte’s status as a banking hub. It was just announced the city will be the home to the new Truist Financial Corp. headquarters; the company was formerly known as BB&T and took on a new name following its acquisition of SunTrust Banks in December 2019. Charlotte is also the home of Bank of America and boasts the largest presence in the country for Wells Fargo.

“Over the last few years, we’ve hosted some large events like the Democratic National Convention and, most recently, the NBA All-Star Game. Those events help us also reach audiences who want to know why these events are being hosted here; they learn something about Charlotte during those events and they want to come see what all the excitement’s about,” explained Murray. 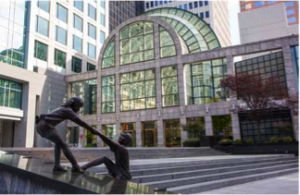 In response, the city continues to offer new and exciting event infrastructure. In December the city kicked off a $126.9 million expansion of Charlotte Convention Center, celebrating its 25th anniversary this year. Highlights of the expansion include a pedestrian bridge linking a new wing of the convention center to The Westin Charlotte, the largest convention center hotel in the city with more than 700 guestrooms. However, this pedestrian bridge is only one of two of interest to travelers to the city, as another will soon begin construction over Interstate 277, connecting Uptown and South End, allowing travelers in business-oriented and hotel-heavy Uptown to explore the unique dining and shopping in South End.

Other event infrastructure undergoing recent changes include the new BOplex, an entertainment complex which combines the previous Bojangles’ Coliseum and Ovens Auditorium, adding 35,000 square feet and a pedestrian connection between the two venues.

“We’ve renovated those buildings and also [are] building a connector facility between the two of them to create one big complex,” said Murray. “That has really been attractive to some of our big events. It was used in the NBA All-Star Game.”

But what lies beyond the business side of Charlotte? After the events are over and the work day is done, Charlotte offers plenty more to travelers. The culinary scene is popping, with more than 50 new restaurants either recently opened or set to open in the upcoming few months, with cuisine ranging from Southern fare to authentic international cuisine to classic Carolina barbecue. The bar scene complements the near-endless eateries with more than 60 breweries in the Charlotte region, and 15 scheduled to open in 2020.

Art, culture and museum options are just as plentiful, with top-tier attractions such as the Bechtler Museum of Modern Art, The Mint Museum, Harvey B. Gantt Center for African-American Arts + Culture and the Levine Museum of the New South all within walking distance of those staying in Uptown. During the pandemic, these facilities offer access to collections and craft demonstrations via virtual experiences online.

When it’s time for travelers to rest their weary heads, Charlotte continues to deliver with an ever-expanding portfolio of hotels. The JW Marriott, InterContinental and Moxy brands are slated to make Charlotte debuts in 2021–2022. Meanwhile, luxury properties such as Grand Bohemian Hotel Charlotte, Autograph Collection, and Kimpton Tryon Park Hotel currently serve travelers to rave reviews.

“I think the city, over the last decade or so, has really worked hard on adding the amenities that are exciting for tourists,” said Murray, and those efforts are paying off. In 2018 some 29.2 million travelers visited Charlotte, and, Murray noted, Charlotte boasts a visitor economy 2.5 times larger than any other county in North Carolina — despite lacking the beach or the mountains other North Carolina destinations offer.

In Murray’s opinion, the attraction all goes back to something Charlotte continues to do well — create a vibrant urban core.

It’s in that lively zone that business and leisure travelers alike can work, eat, drink and play alongside locals who were once travelers themselves but who fell in love with Charlotte and decided to make the Queen City more than just a stop on the itinerary. They decided to call it home.

Easily the most well-known scenic drive in North Carolina is the Blue Ridge Parkway. The parkway spans more than 250 miles and passes through national forests, historic sites and quaint towns. While the parkway is most picturesque during the autumn months thanks to its vibrant mountain foliage, it certainly will not disappoint at any other time of year. The parkway lies about a two-hour drive west of Charlotte.

About the same distance from Charlotte but a shorter experience overall, the Forest Heritage National Scenic Byway follows a 76-mile circular route through forests, across farms and past waterfalls. The drive takes you partially through Pisgah National Forest where, if you have a little extra time and a penchant for a bit of adventure, you’ll want to stop by Sliding Rock. The well-known swimming hole features a natural waterslide not for the faint of heart.

Stop and Smell the Flowers at Amsterdam’s Bloemenmarkt