XIAMEN HAS ALWAYS BEEN a little bit different. Although dozens of Chinese cities outrank it in terms of population and economic might, Xiamen eclipses most of them in reputation and importance.

Here the economic emphasis has always been on trade and finance. With less reliance on factories and heavy industry, one of the things that sets Xiamen apart is immediately clear. Literally. There is no pall of acrid smog. Looking across from the mainland, the skyline is sharply visible, in stark contrast to many other Chinese cities where pollution is sometimes so dense you struggle to see across the street. 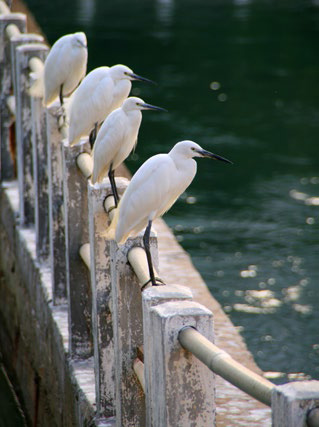 White egrets on the lake shore in Xiamen © KATOOSHA | DREAMSTIME.COM

Another thing that sets the city apart, again literally, is geographic: It’s an island, situated in a bay and linked to the mainland by causeways, bridges and tunnels. Its sheltered waters and natural defenses, together with its strategic location on the coast of the southeast province of Fujian between Hong Kong and Shanghai, made Xiamen (then known as Amoy) a favored base for early foreign traders, and in the 19th century it became the leading port for exporting Chinese tea.

The foreign traders left their mark in the architecture. Unusually for China, Xiamen has largely preserved the colonial districts, especially around the downtown waterfront and on the small adjacent island of Gulangyu, providing this city with a unique character that incorporates Portuguese, British, Dutch and French influences.

Locals speak the Hokkien dialect of Chinese, widespread in Taiwan, Singapore, Indonesia and Malaysia but not so common in China itself. Xiamen remains the country’s largest Hokkien-speaking city. It is from the Hokkien dialect we acquired words such as ketchup, tea and typhoon.

The waterfront district makes the ideal place to start a day in Xiamen, and the historic Lujiang Harbourview Hotel provides one of the best options for accommodation. This colonial-style hotel, dating back to the 1950s, was once the tallest building in Xiamen. Although the island has since sprouted clusters of skyscrapers, none rival this venerable hotel for location.

The hotel’s top-floor (seventh-floor) Ocean-Observation Hall, with restaurant seating inside and out on the terrace, offers an excellent venue for business breakfasts. For a breakfast on the run, you’ll find plenty of coffee shops and cafés dotted around downtown, including branches of Starbucks.

The high-end address of choice is the Kempinski Hotel Xiamen (also a former holder of the city’s tallest-building mantle), located on the shore of Yundang Lake yet within easy distance of the main downtown venues. If you have local business contacts you need to impress, this is the place to do it. 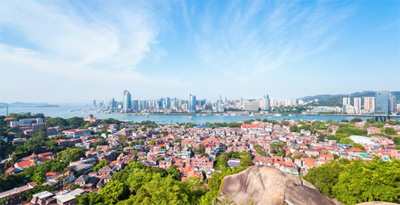 The early foreign settlers based themselves in an enclave on the one-square-mile island of Gulangyu, today undoubtedly Xiamen’s top attraction. For locals, a small ferry from downtown makes the crossing in just five minutes. All non-locals (including Chinese tourists) must use the ferry service from the Dongdu International Terminal; the crossing from there takes 20 minutes.

While the main island of Xiamen provides a relatively calm retreat from mainland China, Gulangyu takes it to extremes. The island’s cobbled streets and alleys are traffic-free: Cars — and even bicycles — are banned. The low-rise architecture is predominantly Victorian: stately brick residences with red-tiled roofs. This little island is widely regarded as the most scenic district in all of China.

Plenty of no-frills restaurants and cafés offer great Chinese food on Gulangyu. But if you’re playing host to business contacts, head to Ludwig Restaurant in the Miryam Boutique Hotel at the foot of the island’s famous Sunlight Rock (offering breathtaking views across to Xiamen). California chef Tomer Biran oversees the international fusion menu.

Back on the main island, the Marco Polo Xiamen Hotel has a long-established reputation as a venue for formal and informal business meetings. The Lobby Lounge makes an ideal setting for afternoon tea or early evening drinks. Seaview Resort, set within the greenery of the beautiful southern coast of Xiamen Island, offers a laid-back option for afternoon meetings. Take tea on the terrace overlooking the Taiwan Strait, or start the evening in the Jazz Bar.

For a wider range of options for business entertaining, head back downtown. The Fat Fat Beer Horse craft brewery sports a fun atmosphere — a good place to get things rolling. As for restaurants, it’s probably best to let your Chinese associates pick the venue if you’re eating local cuisine. For a refined international choice, you can’t go wrong with the Portofino Italian Restaurant at the Millennium Harbourview Hotel.

It’s not hard to appreciate why Xiamen often features at the top of lists of China’s most livable cities. This is China made easy: less frenetic, less polluted, more open, more relaxed. The pioneering foreign traders of the colonial age discovered it to be an excellent place in which to live and do business. It still is.