UNDER A CLEAR, DARK SKY, lit with a bright moon and what seems to be millions of twinkling stars, she pulls herself out of the ocean and onto the beach. Over the course of the next few hours, she’ll crawl up the beach until she finds her spot, dig a nest a few yards deep, lay about 100 eggs, work tirelessly to cover and camouflage the nest from waiting predators and finally turn around and crawl back into her ocean home, caressed by the cool waters that wash over her tired muscles, teary eyes and smooth shell. 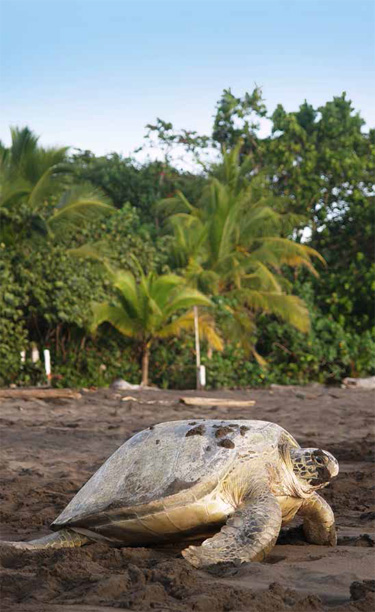 Sea turtle crawling from the beach to the sea in Tortuguero National Park © JARNOGZ | DREAMSTIME.COM

This scene plays out time and time again by endangered green sea turtles on the beaches of Tortuguero (“Region of Turtles”) on the northeastern Caribbean coast of Costa Rica. The 22 miles of beaches in this region, part of the Tortuguero National Park, are considered the most important nesting beaches in the Western Hemisphere for the green sea turtles; they share the beach with leatherback, hawksbill and loggerhead turtles that lay nests here as well.

Sea turtle conservation is not new in Costa Rica and, in fact, has been relevant for nearly 60 years. In 1956 Dr. Archie Carr published The Windward Road: Adventures of a Naturalist on Remote Caribbean Shores, detailing sea turtles in Costa Rica and the challenges they faced in that era. According to the STC, “Through his research, teaching and writing, Dr. Carr is responsible for accumulating and distributing much of what is known about the biology and life cycle of sea turtles. He is credited by many for bringing the first international attention to the plight of marine turtles.”

In response to Dr. Carr’s book, Joshua Powers founded the STC (originally the Caribbean Conservation Corp.) in 1959; Dr. Carr served as scientific director until his death in 1987 and was known as the world’s leading authority on sea turtles. Today the STC continues Dr. Carr’s legacy by protecting sea turtles along Costa Rica’s Caribbean coastline through monitoring nesting trends, growth rates and reproductive success.

Recognizing it takes a village — literally, in this case — the STC works in tandem with Tortuguero villagers by hiring them to monitor the beaches and help protect Costa Rica’s sea turtles. Through an STC training program, villagers are issued government permits authorizing them to lead nightly turtle-watching excursions during the nesting high season (July through October) and are the only guides authorized to do so. 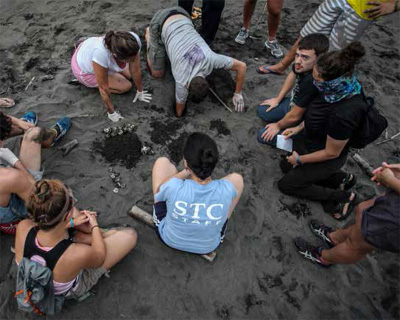 During the nesting season, an estimated 100,000 to 150,000 visitors trek through the jungles of Costa Rica annually to visit Tortuguero National Park to witness the sea turtles make their pilgrimage to lay eggs. Though the park’s beaches stretch for 22 miles, just five miles are accessible to the public for authorized nest viewing; the other 17 miles remain off limits — except for the sea turtles, of course.

When darkness falls, small groups of people quietly walk along the beach looking for signs of tracks leading out of the ocean and onto the sand. The only lights shining on the beach are the red flashlights used by the guides; the red lights don’t interfere with the turtles’ navigation. If the timing is right and the stars align for these groups, a sea turtle (or two, or 10) will be nesting, and the natural cycle continues. The luckiest visitors will not only see a sea turtle lay her nest but perhaps even watch a bale of baby sea turtles hatch and make their way to the ocean to begin their life journeys.

In addition to nighttime viewings, the organization offers eco-volunteer adventures. For one, two or three weeks between March and October, eco-volunteers 18 years and older are invited to assist the STC field team with research and monitoring, as well as enjoy free time to explore the area. Three levels of accommodations range from dorm-style living to eco-lodges, such as the all-inclusive Pachira Lodge across the river from the village of Tortuguero.

For generations to come, sea turtles will continue to make their migration back to the beaches of Tortuguero National Park, back to where they themselves hatched, and will continue to lay their nests there just as their ancestors have for generations past — under clear, dark skies, lit with a bright moon and seemingly millions of twinkling stars overhead.

Visitors can reach Tortuguero via a 30-minute charter flight from Juan Santamaría International Airport or a canal boat ride (90 minutes to two hours) through the jungles of Costa Rica, a terrific introduction to the area. Be on the lookout for crocodiles, water-walking lizards and myriad birds during the boat ride.