THE GREAT CITY OF İSTANBUL represents a vital crossroads of trade and culture, though most people think primarily of only one axis: east-west, Asia and Europe. Here the two continents meet — or divide — depending on your perspective. But there is also another axis: south-north, linking the Mediterranean to the Black Sea.

In our perception of Turkey, we tend to neglect the Black Sea, but 22 miles northwest of İstanbul, on the shore of that significant body of water, geography is currently being reshaped. Crinkled, forested hills are being leveled and wetlands filled in to create a flat expanse of more than 17,000 acres.

This is the site of İstanbul’s new airport, projected to begin operating in 2018. With six runways and the world’s largest terminal under a single roof, the $36 billion megaproject will shift İstanbul’s — and Turkey’s — center of gravity. The Black Sea coast will be truly on the world map.

The Black Sea coastline stretches from Turkey’s border with Bulgaria to the border with Georgia along hundreds of miles of beaches and coves, pine-clad headlands and formidable cliffs. In contrast to the arid, sun-bleached tourist resorts of Turkey’s Mediterranean coast, the Black Sea coast scenically resembles the U.S. Pacific Northwest, with weather to match.

The city of Samsun, roughly midway along the coast, makes a good staging post. The city itself, despite a long and complicated history, is now a modern sprawl with few attractions, though it holds a special place in Turkish history, for it was from here Mustafa Kemal Atatürk initiated Turkey’s War of Independence in 1919. The Gazi Museum commemorates that important event and is worth a visit.

The strategic position that proved so crucial to the success of Atatürk’s military campaign makes Samsun a logical base for modern tourists. From here you can travel west along the warmer, sunnier stretch of coastline or east into cooler, damper climes.

Going west, the little city of Sinop, the oldest part of which is enfolded by formidable medieval walls, sits picturesquely on an isthmus jutting out into the sea. Sinop Archaeological Museum provides a window onto the city’s many-layered history.

The 200-mile road journey from Sinop to Amasra is endlessly scenic. Mostly the road snakes along the shoreline, with occasional diversions inland. You’ll pass few significant towns along the way, just a succession of attractive, red-roofed villages. 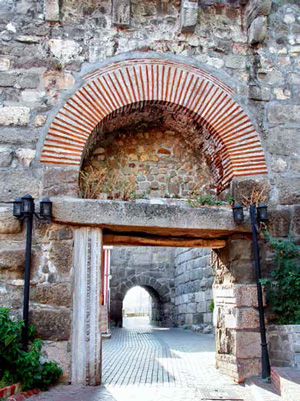 After a leisurely half-day drive, you’ll arrive at the old port of Amasra, huddled tightly on a headland. Homer mentioned the original settlement in The Iliad, and subsequently the Romans, the Byzantines and the Genoese made their mark. Amasra Castle, the main historic attraction, incorporates elements from all three periods.

But the greater lure is the town itself, picturesque from all angles and indented with a beautiful sandy beach. Despite the town’s undoubted attractions, the tourism industry remains relatively modest. The colorful wooden fishing boats hauled out in the lee of the old battlements are not there for mere show. This remains a working fishing port, and you can enjoy the benefit in the excellent fish restaurants.

East of Samsun, halfway to the Georgian border, lies the city of Trabzon which, under its former name of Trebizond, was once the center of a great empire and an important stop along the fabled Silk Road. Although modern Trabzon evolved into a drab provincial capital, the labyrinthine alleys of the old town continue to evoke something of the exotic past.

One of Trabzon’s most impressive buildings is also one of its most controversial. The Hagia Sophia, a 13th-century Orthodox church, in the course of its history has been converted into a mosque, a prison and — during World War I — a Russian military hospital. In recent years the building has been the object of a tug of war between the Ministry of Culture, which wants to maintain the building in its current role as a museum, and religious authorities, who want to turn it once again into a functioning mosque. For now it remains a museum and is the city’s must-see attraction. 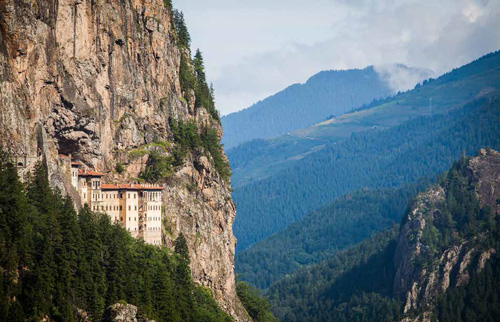 An hour’s drive inland from Trabzon, built precariously into the rocky face of a sheer cliff, lies perhaps the greatest cultural attraction of Turkey’s entire Black Sea region, the breathtaking Sumela Monastery. Originally founded in the year 386, this Eastern Orthodox monastery steadfastly endured centuries of political and religious upheaval — not to mention earthquakes — and now serves as an important site of pilgrimage for Christians from Russia and Greece.

The monastery’s UNESCO World Heritage status is dependent on essential restoration work which began in September 2015, and, consequently, scaffolding now shrouds the building. It is expected to reopen to worshippers and tourists on Assumption Day (Aug. 15) in 2018, by which time the Istanbul New Airport should also be open: two feats of architecture, one ancient, one modern.

Turkey has always been recognized as a geographic crossroads, but it is also a historical crossroads, with many eras and cultural legacies entwined. A journey along the Black Sea coast constantly reminds travelers of this heritage.

The main regional hub — in fact, an increasingly important global hub — is İstanbul’s Ataturk International Airport (IST). Cramped and crowded, its shortcomings are readily apparent. In 2018 (if targets are met) the airport will close and all operations will move to the state-of-the-art new airport — unnamed at this time — beside the Black Sea. Although the main length of the Black Sea coast, on the eastern side of the Bosporus Strait, remains accessible by vehicle from İstanbul, most tourists fly in to one of the main coastal cities. Samsun Airport (SZF) has regular connections from İstanbul and seasonal flights from Vienna (VIE) and Berlin-Tegel (TXL). Trabzon Airport (TZX) offers connections to İstanbul and other Turkish cities as well as year-round flights from Germany.

Restaurants in the Black Sea Coast

PAMUK KARDEŞLER There are three locations in the city; the latest and most popular branch adjoins a small marina at Batı Park, a popular recreation area; renowned for fresh fish. Batı Park, Samsun $$

Where to Stay in the Black Sea Coast

ANEMON SAMSUN HOTEL Featuring stylish rooms in a seafront location with an adjacent shopping mall and close to downtown, this property offers one of the best options in the city. Yeni Mahalle Çarşamba Caddesi 52, Canik, Samsun $$$