The Waldorf Astoria Washington, D.C. opened in June 2022 within the Old Post Office Building, built in the 1890s on Pennsylvania Avenue, midway between the White House and the Capitol. The nine-story Richardsonian Romanesque building, designed by Willoughby J. Edbrooke, occupies an entire city block; the building was the first steel-frame structure in D.C., with 5-foot-thick granite masonry walls supporting bold arches. Its distinctive 315-foot clocktower is the second-tallest structure in the nation’s capital, after the Washington Monument, and houses bells installed in 1983. These bells were a gift from Great Britain’s The Ditchley Foundation in 1976, in recognition of the Bicentennial. The National Park Service operates self-guided tours up the glass elevator to the 270-foot-high observation tower, with its bells and amazing vistas and views of notable national monuments. 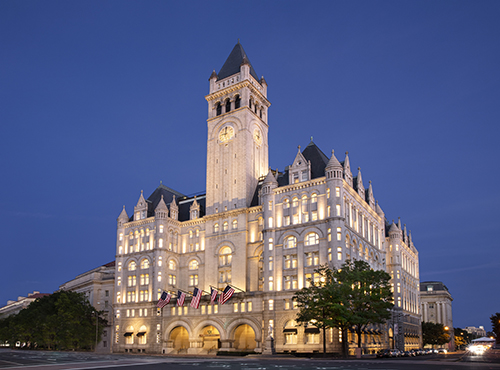 The mammoth building was slated for demolition twice; it was spared in 1928 because of lack of funding during the depression and became an office building for, among others, top FBI officials during World War II (whose offices are now expansive suites). In 1970, Nancy Hanks, chairperson, National Endowment of the Arts, who organized a citizens’ campaign to reverse the decision, testified in Congress: “Old buildings are like old friends.” She even threatened to chain herself to the door when demolition crews arrived.

Preservationists prevailed and, by 1973, the iconic edifice achieved a listing on the National Register of Historic Places. The General Services Administration rehabilitated the building and it reopened as Nancy Hanks Center in 1983, with ground-floor retail and upper-floor office space, including the endowment agency. That redo added a skylight over the building’s central atrium, flooding the interior with natural light. The atrium has become a stunning hotel centerpiece in the building — which was leased to a consortium owned by Donald Trump, who restored and refurbished it and opened a 263-room hotel in 2016. The building was then purchased by CGI Merchant Group in May 2022 and rebranded as Waldorf Astoria.

Today, that soaring nine-story, light-infused atrium, with its glass ceiling, steel trusses and four massive crystal chandeliers, comprise just some of the 628 hanging in the hotel. (Can you imagine cleaning them every eight weeks?) This notable gathering space, with the bar and the classic Waldorf Astoria restaurant Peacock Alley, will soon also be home to Bazaar by José Andrés, who has dreamed about opening a restaurant in the atrium since 1993. Sushi Nakazawa, which ranks among the best sushi bars in D.C., is where Michelin-star chef Daisuke Nakazawa serves a Nigiri-sushi exclusive Omakase menu, with about 20 pieces of Nigiri. With fond memories of the classic New York venue in my head, I met my colleague for lunch at Peacock Alley. In D.C., the grand “see and be seen” space is divided by couches and table groupings into more cozy sections. I ordered hand-cut beef tartare, served with egg yolk, shallots and capers; it’s a favorite dish I only order where the finest ingredients are assured. My colleague indulged in a Wagyu ribeye in a red wine sauce served with potato millefeuille and smoked carrot purée. We started with Champagne; I finished with Valrhona chocolate, he ordered banana foster bread pudding with bourbon ice cream and candied pecans. 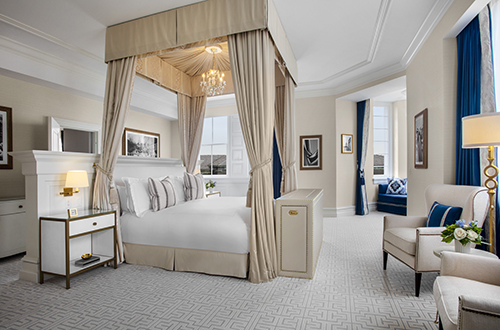 Event spaces, large and small, are intrinsic to the hotel, and the 13,200-square-foot ballroom accommodates 1,300 guests. Spaces include standing receptions and certainly accommodates major inaugural balls. Some event spaces take place off the main lobby in corner rooms, notable for small, rounded, turret-like spaces, reminiscent of medieval fortresses. These unique curved spaces also enhance some of the 35 suites and serve as settings for office desks, settees and, in the Presidential Suite, a solitary toilet. This over-the-top, 4,000-square-foot, three-bedroom suite occupies the former Postmaster General’s office and boasts 16-foot ceilings, tall windows, wainscoting, wood paneling and window cornices carved with USPS symbols. There’s a living room fireplace, a dining room with seats for 10 guests, an office, fitness area and butler’s pantry. The primary bedroom boasts a four-poster canopy bed and a Calacatta Gold marble bathroom located within the former Postal Service safe, where its original 2-foot-thick doorway remains. The 6,300-square-foot, bilevel Waldorf Townhouse is the largest in the city and has dedicated street entry. 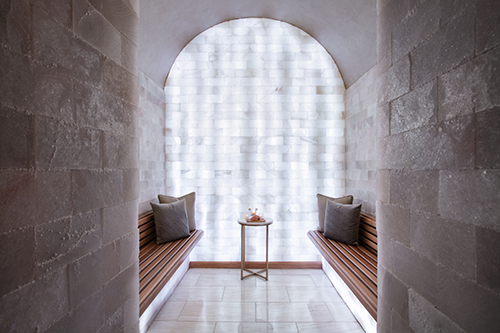 On the lower level, spa director Jessica Rose oversees the 10,000-square-foot Waldorf Astoria Spa, which houses a fitness facility, his and her changing rooms, a Himalayan Salt Therapy space, manicure and pedicure thrones, a waterfall and six treatment rooms, including a couple’s suite. I received a skin treatment from licensed master aesthetician Jennifer Kelly, who used the HydraFacial machine to exfoliate while infusing peptides to hydrate the skin. In addition to the luxury experience, what’s notable is Hilton’s Travel with Purpose Environmental, Social and Governance philosophy emphasizes environmental sustainability, gender parity and ethnic diversity.

And the hotel is just a short taxi ride to Union Station and my comfortable, three-hour ACELA train back to New York City.