WITH CITIES OLD ENOUGH to appear in the Bible and ancient ports connected to classical myths, Israel is a storied land that doesn’t often inspire thoughts of modernity and progress, but its second-largest city should. Though not the capital, Tel Aviv (officially, Tel Aviv-Yafo) is Israel’s economic hub, and its dominance in the technological and creative industries drives traffic to the city in droves. It’s the No. 1 destination for immigration in Israel and has been for the past five years.

A decade ago, Tel Aviv’s economy remained effectively local, primarily serving the Israeli market. As ancient as the sands and seas may be, Israel itself was just barely 60 years old at the time: a young nation with scarce resources and relative instability on the world stage — not at all an ideal environment for most established businesses. It was and remains a startup nation, with a climate better suited to startup companies, especially in the booming tech sector.

Israel spends more of its gross domestic product on civil research and development than any other nation in the world and ranks 13th in all scientific output. It’s a sci-tech superpower with Tel Aviv as its hotbed, where considerable investment in infrastructure attracted innovative companies to the city that likes to call itself “the startup city of the startup nation.” Today nearly 2,000 startups scatter throughout the 20-square-mile city bordered by the Mediterranean Sea on Israel’s western shore — the highest density in the world both per capita and per square mile. It’s a staggering statistic, but the most dramatic shift for Tel Aviv, a city already well-established as a technology powerhouse, is toward new global, not local, businesses. The rest of the world has arrived.

As Israel’s clear center of creativity and innovation, Tel Aviv now draws ancillary businesses that support and profit from the thousands of budding startups. Recent arrivals include dozens of business accelerators alongside countless financial, legal and service companies catering specifically to tech newbies populating the scene. This momentum has been building for more than a decade as Israeli businesses flock to Tel Aviv to take advantage of its resources, but it only recently began catching the attention of foreign businesses eager for inspiration. In the past several years more than 100 international research and development centers moved in, indicative of the marked shift in Tel Aviv’s economy from purely local to decidedly global.

The rapid development and expansion of businesses in Tel Aviv brings a wave of new residents from around Israel and beyond and, because of the nature of startups, many of these newcomers are young. Tel Aviv, no stranger to a culture of youth, has long been known for the good food and great nightlife that dominate its social scene, and the municipality actively courted this demographic in its successful effort to become a tech and innovation giant. Here youth isn’t shunned by business and government; it’s valued. Younger leaders tend to take more risks and search for new solutions to old problems, ideal qualities in a startup culture.

Another common characteristic of Tel Aviv’s newest citizens: their transitory nature. The tech industry thrives on enthusiasm, motivation, advanced education and global- mindedness, attracting employees who are not just typically younger but who tend to be internationally curious. More often than not they’re short-term residents who bring their vitality and zeal to the city to work with a local company for a few years before heading on to the next venture. As with youth, Tel Aviv recognizes the implicit value here, too. A constant stream of new ideas, fresh excitement and pure energy pours into the city, and that brings growth and innovation not just to business but to local culture. And without the culture, it’s unlikely the industry Tel Aviv worked so hard to develop could survive.

Without such vibrant communities of artists, foodies and culture hounds, there’d be little to attract the intellectual and culturally curious crowds that tech relies on. Relocating to Tel Aviv presents certain challenges; as part of a Middle East nation, its geography alone brings a host of societal and political challenges for many new arrivals. The dramatic influx of residents also puts considerable strain on the city’s infrastructure, but the promise of robust culture can outweigh these pains, especially for a young, temporary resident. As the tech industry depends on a workforce inspired by culture and the city’s culture benefits from its evolving population, both will continue to advance from the symbiotic relationship in a seemingly unstoppable pattern that makes Tel Aviv one of the most culturally attractive destinations for both businesses and travelers alike.

Why is Tel Aviv experiencing such a surge in tourist attention right now, and how will it capitalize on the momentum? In 2019 the city hosted the Eurovision Song Contest, which introduced Tel Aviv to tens of millions of viewers across Europe and around the world. The city’s preparations for Eurovision resulted in a quantum leap in its standing as a tourist destination. In the coming years, in line with strategic steps to position the city as a destination for large international gatherings, numerous efforts will be made to host international conferences, trade shows and exhibitions. To achieve that goal, the municipality established the International Convention Bureau in 2018. It’s the first collaboration of its kind between the Greater Tel Aviv Hotels Association, Expo Tel Aviv and Tel Aviv Global & Tourism.

What types of tourism products is the city presenting to these new visitors? Tel Aviv’s unique DNA as a tourist destination rests on three firm pillars: the ancient city, Old Jaffa, our main attraction; the new city, Tel Aviv, characterized by phenomenal urban vitality; and, of course, the beach, with its extraordinary qualities. In the coming years efforts will continue to develop, promote and sell the city as a tourist destination while relying on these three pillars. The municipality will give preference to initiatives, projects, attractions and services associated with these three pillars.

Culturally, what’s happening in the city right now? This year Tel Aviv celebrates 100 years of Bauhaus with the grand opening of the city’s official White City Center. Tel Aviv-Yafo Municipality, the Tel Aviv Foundation and the German government cofounded the White City Center in an effort to advance the recognition of the outstanding architectural landscape of Tel Aviv, with its collection of more than 4,000 buildings constructed in the International Style, known popularly as Bauhaus. The high concentration of these unique historical buildings led UNESCO to declare the White City area in Tel Aviv a World Heritage site in 2003. Joining several leading cultural institutions in the city, the new center is a valuable source of information about the heritage of the White City for both residents and visitors. 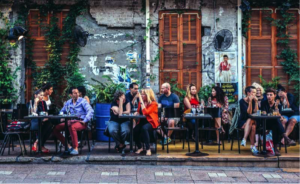 Spend an afternoon or evening meandering through the historic stone alleys of Old Jaffa, one of the world’s oldest port cities and featured in both Biblical stories and Greek myths. Just as ancient, the nearby Jaffa Port remains a bustling hub of activity, though much more for recreation today. Move into the 20th century with a visit to White City Center on Idelson Street to educate yourself on the riches of Israel’s Bauhaus collection before exploring the surrounding White City area itself. Entrance is free, and the center provides a calendar of drop-in programs on its website. Come to the present day in the outdoor shopping neighborhood of Sarona, the former German Templar colony that later housed modern Israel’s first government before being converted into today’s dining and shopping experience. Then dive into Tel Aviv’s numerous food and craft markets to engage all of your senses at once. Finally, don’t leave this seaside city without visiting at least one of the dozen or so beautiful beaches surrounding Tel Aviv.

U.S. citizens must hold a passport valid for at least six months from entry date. No visa is required for stays up to 90 days.

THE DRISCO HOTEL TEL AVIV
Modern interiors complement classical architecture in this 5-star property on the storied site of the city’s first grand hotel outside of the old Jaffa gates.

THE JAFFA TEL AVIV
This Luxury Collection hotel boasts an ideal location near many top attractions, including the Mediterranean Sea, Jaffa Port, the Shuk Hapishpeshim flea market, and museums and shops.

THE SETAI, TEL AVIV
Past and present collide in the marble and stone halls of this 5-star property comprising historic Ottoman buildings, a restored Turkish hammam and a rooftop infinity pool overlooking the city.

MASHYA
Named for mace (the spice), this chic eatery inside the Mendeli Street Hotel takes inspiration from the nearby food market, focusing on the freshest ingredients.

OASIS
Culinary theater without pretense or gimmick, hyper- seasonal ingredients and meticulous craft take center stage at Oasis, where Chef Rima Olvera presents daily masterpieces that may be available for one night only.

Ben Gurion Airport is the country’s primary international airport and by far the busiest. Taxi dispatchers located outside of the arrivals hall offer fixed but high prices, leading most to opt for generally less expensive private car services. Trains run regularly to and from the airport, but Tel Aviv’s stations lie on the outskirts of the city and require an additional bus or taxi ride to reach most hotels. Trains do not run during Shabbat (Friday evening through Saturday evening). Shared shuttles offer 24-hour, door-to-door service, costing as little as $20 per person and bookable in advance online. When leaving Israel, arrive at the airport at least four hours before takeoff and be prepared for lengthy interviews and aggressive security screening, conducted randomly but frequently.