AS WE WANDERED THROUGH busy art galleries and locally owned shops and boutiques on High Street in Columbus, Ohio, it was hard to imagine this vibrant area was a decaying, squatter-filled, crime-ridden section of town not so long ago.

The 18th-century brick buildings in the Short North Arts District housing shops, restaurants and residences intersperse with sleek new condo buildings, brand-new high-tech hotels and high-rises under construction. A recent infusion of millions of dollars from the city for streetscape improvements made the area greener, safer and more walkable. What began as a burgeoning arts district in the 1980s now blooms as one of the hottest, trendiest neighborhoods of this fast-growing city. 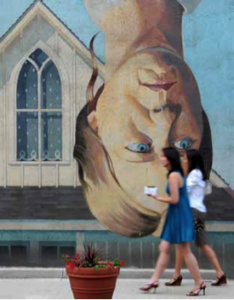 Short North, located directly north of downtown Columbus, proves easily accessible by walking or taking the CBUS, a free circulator bus service that runs through downtown and Short North every 10–15 minutes. You’ll know you’re in the right neighborhood when you spot the giant colorful murals on the buildings and lighted metal archways over High Street. These were installed in tribute to the dozens of gaslit wooden arches that first spanned the street in the 1880s, earning Columbus the nickname of “Arch City.”

Betsy Pandora, executive director, Short North Alliance, said, “Short North has grown to be a premier 18-hour area where people love to live, work and visit. We have close to 400 businesses here, double the amount in 2012. It’s a unique, diverse area filled with entrepreneurs.”

The area benefitted from the rapid growth of Columbus, the state capital, considered one of the top places to do business. With more than 2 million people, the city now ranks No. 14 in the country in terms of population.

“Short North is seeing a significant amount of development,” Pandora said. “More than 1,000 hotel rooms have been added or are under construction.” These include the new Graduate Columbus and the Moxy Columbus Short North.

Joel Pizzuti is president of the Short North Alliance and president of Pizzuti Companies, a commercial real estate company that moved its headquarters to Short North when it was build- ing a mixed-use project in the area. “Our folks wanted to be here. It’s walkable, active, fun and accessible — it’s a fun place to spend the day.”

While urban development is happening everywhere, Pizzuti said Columbus is fortunate because the Short North neighborhood was already growing on its own.

“While it was a place people spent time before, it didn’t have the office and residential component it has now. Over the last 10 years it has really evolved as a community. Being located between the core of downtown and the Ohio State campus has been instrumental. While most of the activity has been along High Street, we now see it moving [three to four] blocks on either side.”

All this development and excitement about Short North bodes well for the city of Columbus. As Betsy Pandora said, “We have a saying: So goes Short North, so goes Columbus. A lot of activity tries itself out here then spreads across the city.

Columbus’ location close to the center of the state provides easy access to Ohio’s 27 scenic byways. One of the best for scenery and fantastic hiking opportunities is the Hocking Hills Scenic Byway in southeast Ohio. This 30-mile byway makes a loop around Hocking Hills State Park, considered one of the best in the country. It has several hiking trails with rugged cliffs, huge waterfalls and ancient caves.

Travel through some of the most scenic countryside in Ohio on the Covered Bridge Scenic Highway, which parallels the Little Muskingum River south of Columbus. Stops on the self-guided tour include the 192-foot Knowlton Covered Bridge, constructed in 1887; an old country store; and a Mail Pouch barn. These were barns painted with ads for the Mail Pouch chewing tobacco company in the early 20th century.

Estimates say one in six Amish people live in the Holmes County area northeast of Columbus. You’ll most likely share the road with horses and buggies on the Amish Country Byway, featuring plenty of shops selling handmade wood products, baked goods, quilts and Amish food. Make a stop in Winesburg, a historic village settled by four German men in 1827.