SPEND JUST A FEW MINUTES in downtown Seattle and one thing stands out: New construction appears everywhere. The Emerald City seems to constantly re-invent itself and re-invest in its citizens. From tourist attractions and infrastructure to new ways of thinking, the local government and businesses are hard at work to improve upon a city recently ranked second in the nation in overall health by Wallethub.com.

The state of Washington is well-known among locals and tourists for its healthy lifestyle and outdoor fun, and Seattle is no exception. One of the city’s premier attractions, the Washington Park Arboretum, continues to draw visitors with its beautiful native landscapes and peaceful grounds, but the new 1.2-mile Arboretum Loop Trail brings new possibilities to living a healthy lifestyle in an urban center. The trail, which began construction in 2016, recently opened to the public in November 2017, with a formal grand opening April 8, 2018.

The new loop, free to use and open from dawn to dusk, aligns perfectly with the goals of the arboretum: conservation, education and recreation. It provides visitors with an improved location for walking, jogging or bicycling safely within the city while enjoying the lush surroundings of the arboretum’s 230 acres of natural beauty.

With several of the nation’s leading businesses headquartered in Seattle and its surrounding areas, unemployment is low — just 3.6 percent compared to the early 2018 national average of 4.1 percent. Companies like Amazon, Starbucks and Nordstrom not only provide jobs for the community but also help to create a thriving local economy.

One of the problems these corporations face is providing a healthy environment for employees and the surrounding neighborhoods. Large metropolitan cities tend to be long on densely populated buildings and short on nature and open spaces. Amazon, headquartered in the heart of the downtown area, has worked hard to combat this problem. On Jan. 29 the city celebrated the grand opening of the Amazon Spheres, a brand-new way of thinking for a healthier work environment. Seven years in the making, these large, plantfilled domes located in the Regrade District aim to provide employees with a park-like environment while working in a heavily urban area. 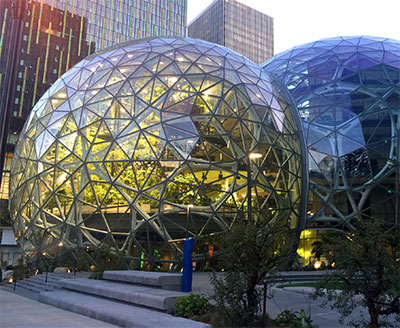 Employees and their guests are free to enjoy the shared spaces of these living domes where they can connect with nature thanks to the biophilic design of the spheres. A full-time horticultural team maintains a green environment of more than 40,000 living plants that transform the spheres into a living forest within the heart of downtown. Tourists can enjoy the unique beauty of these structures that offer a refreshing break in a seemingly endless row of high-rise buildings.

According to one Amazon spokesman, the “learn and be curious mentality” fostered by interacting with a living environment inspires creativity and innovation. As one of the nation’s leading employers, Amazon and, in turn, Seattle, could be on the forefront of employee wellness and productivity with this latest advancement.

The city’s ever-changing face isn’t limited to new construction and new development. Local initiatives and programs are also on the rise and pushing for a healthier Seattle for everyone. One of the forerunners in this movement is the Seattle Healthy Kids Coalition, which recently succeeded in passing a tax on sugar-sweetened beverages. The tax follows the lead of other cities such as Berkeley and Philadelphia that saw a decrease in sugary beverage consumption resulting from similar taxes.

“The attractive thing about Seattle is that it has a reputation for investing in the community. We value our natural resources, clean water and clean air,” says Aaron Pickus, spokesman, Seattle Healthy Kids Coalition. The city is famous for its outdoor activities and healthy lifestyle, and the coalition works hard to improve upon that by addressing the correlation between sweetened beverage consumption and the public health challenges presented by obesity.

“The economy is booming,” says Pickus, “but not everyone is benefitting equally. This is one way to ensure everyone can benefit equally from a tax on sugary drinks to support those most affected by the marketing and products of the soda industry, especially traditionally underrepresented communities.” Revenues from the new tax are designated to supplement existing community health programs such as the Fresh Bucks Program that matches food stamp programs with vouchers for fresh fruits and vegetables at local farmers markets.

Even the iconic Space Needle is getting a much-needed facelift, or “spacelift,” as it is referred to. The $100 million renovation project includes an improved observation deck and a first-of-its-kind revolving glass floor for SkyCity Restaurant, the revolving eatery at the top of the Needle. Renovations are expected to be completed later in 2018.

A little more than 60 miles north of Seattle via Interstate 5 is a winding stretch of State Route 11 known as Chuckanut Drive. This 24-mile-long, twolane road takes visitors through the beautiful evergreen forests of the Chuckanut Mountains before arriving at the rocky coastline of the Salish Sea. This is the only scenic drive through Washington where the Cascade Mountain Range directly meets the sea. Starting at Burlington and ending at the Fairhaven district of Bellingham, the drive takes about 45 minutes, but it is well worth the extra time to make some stops along the way. Plan on at least five to six hours to accommodate for stops at some of the roadside distractions along the route, like watching the sun set over the nearby San Juan Islands.

For a shorter trip from downtown Seattle, head north about 25 miles and take a ferry to the little town of Clinton on Whidbey Island for a beautiful drive along Whidbey Scenic Isle Way. This scenic byway leaves the hassles of city life behind while you get back in touch with nature. The 48-mile drive takes just over an hour, not accounting for time to stop and enjoy the beaches and observe local wildlife.