The day we visited, we each brought our biggest worry, written on a scrap of paper, meticulously folded into the smallest possible contortion, ready to slip into a crack of the Western Wall. Feeling giddy, we descended a limestone staircase into the rectangular Prayer Plaza.

On this afternoon before Shabbat, which began at sundown, a stream of people churned through the men’s and women’s areas. As directed by Jewish Orthodox tradition, genders are separated by a wooden mechitza partition to obscure the view of the opposite sex.

On their side, the men faced the Wall, praying. Some held books, others held Torah scrolls. A spinning circle of dancing men — most with payot (sidelocks) and wearing a skullcap, fedora or fur-lined hat (shtreimel) — filled the plaza with song and celebration, commemorating a 13-year-old boy’s bar mitzvah. While his mother and other female relations stood on chairs peeking over the mechitza, their beloved boy was called to the Torah as a man.

On the women’s side, I stood with old and new friends with whom I had traveled on a pilgrimage tour of Israel called Momentum. We slowly advanced toward the rocks stacked in rectangles and squares, sized according to the era they were added to the wall. Some women, once their turn at the Wall arrived, practically collapsed with emotional relief at being heard by the One who could finally bring them peace. Some cried. Some scanned the limestone for enough space to fit a piece of their hearts into a crack along the Wall, which already held pieces of millions of other hearts.

Known in Hebrew as Ha-Kotel Ha-Maʿaravi, the Western Wall is such a rock star that just saying “Kotel” is enough for everyone to know what you’re talking about. It came from humbler beginnings, though, as one of the support walls King Herod added during an expansion of the Second Temple around 15 B.C. 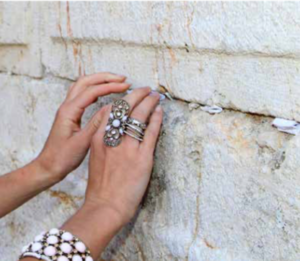 But let’s back up. King Solomon built the First Temple on Temple Mount around 960 B.C. The Jewish people thrived for almost 400 years until the Babylonians destroyed the temple in 586 B.C. and exiled them from Jerusalem.

When Persian ruler Cyrus the Great beat back the Babylonians 47 years later, the Jewish people returned and quickly constructed the less opulent Second Temple in 516 B.C. About 480 years later, Herod the Great extended the platform of Temple Mount to hold the buildings he added to the courtyard and built four retaining walls to hold everything in place. After the Romans destroyed Jerusalem and the temple in A.D. 70 as retribution for a Jewish uprising, only the Kotel remained.

“The Kotel is the holiest, most important and most misunderstood place in the world,” said Patrick Amar, guide, Israel Executive Touring Center. “To truly understand the Kotel, you have to do the tunnel tour.”

The Kotel once rose almost 200 feet. Today it stands about 62 feet above the courtyard, but underground spaces extend another 43 feet deep. An entrance on the northern side of Prayer Plaza leads to the tunnel, which heads north along the 1,600-foot-long wall.

We descended into the lit-up tunnel at night, past layers of stone marking centuries of construction and passing under the Muslim Quarter above. My fingers absently traced the cool rock wall, smoothed from the touch of centuries of other explorers. Water flowed down walls into ancient cisterns. Stacks of rocks stood in piles in various stages of archaeological discovery.

We saw men, many in Orthodox dress, praying at the Wall in an underground synagogue beneath Wilson’s Arch, the mood somber. The women’s section is on a raised platform, and chairs and prayer books are available.

This underground section lies close to the location of the Holy of Holies, the innermost sanctuary of the First Temple, thought to be the intersection of Heaven and Earth. It contained the Foundation Stone, which Torah scholars believe to be the rock from which the world was created and the rock upon which Abraham almost sacrificed his son, Isaac. The Ark of the Covenant rested on the Foundation Stone and contained the stone scrolls of The Ten Commandments, Aaron’s rod and a jar of manna. Upon the solid gold cover of the Ark rested two cherubim, between which, the Torah says, God dwelled.

The Ark and its contents disappeared before the Babylonians sacked the First Temple. However, the Second Temple still held the Foundation Stone. For Muslims, the Foundation Stone marks where Mohammed ascended to Heaven, and its significance caused centuries of religious conflict over Temple Mount, which the Muslims call Haram al-Sharif.

The gilded Dome of the Rock, behind the Western Wall, has covered the Foundation Stone since an Umayyad caliph built it in A.D. 691. Only Muslims may enter the dome and see the Foundation Stone. However, everyone may visit Temple Mount; they just can’t pray there.

The Western Wall and tunnel remain the location closest to the Holy of Holies where Jews are allowed to pray. But there’s hope. “In the Old City, the Christians have the Church of the Sepulchre, the Muslims have the Al Aqsa Mosque, and the Jews have a broken wall that’s waiting to be rebuilt,” said Amar, referring to a Third Temple prophesied to be constructed during the coming Messianic Age, when peace will reign over the world and humanity will finally come together as one. Maybe that’s the prayer we should be tucking into God’s ear.

INFO TO GO
Tel Aviv’s Ben Gurion International Airport lies less than an hour by car from Jerusalem. You do not need reservations to visit the Western Wall; however, tunnel tours book far in advance. Two multilingual tunnel tours are available. One visits the original tunnel, and the Arches Tour explores recently discovered sites. Dress modestly to visit holy sites; men should cover their heads, and women should wear long sleeves and pants or skirts that cover their knees.