HULU LIVE TV
Cord cutting is getting more attractive, especially with the implementation of live TV, the last obstacle for sports fans and news junkies. Hulu Live TV is available all over the United States, but local channels are currently limited to certain areas. It includes many of the staples like CNN, ESPN and Bravo, but certain networks like AMC, Comedy Central and HBO aren’t offered. The $40 subscription fee also gets you 50 hours of storage to Hulu’s cloud DVR and access to the site’s extensive on-demand catalog. Extra features like no commercials and unlimited screens are available for an additional $4–20. $40/month.
hulu.com/live-tv

SONY PS-HX500
USB turntables aren’t often considered hi-fi. Sony’s PSHX500 is one of the exceptions. Vinyl is in the midst of a resurgence, and many records come with a link for digital downloads, but some enthusiasts prefer an analog mix to digital. The PS-HX500 solves this with a hybrid setup, playing vinyl through high-quality circuitry that simultaneously records to a high-resolution digital file. There are better decks out there, but they’re also more expensive, and the extra cash is better spent on a new cartridge. If you like its minimalist design, this is a reliable turntable to crown your listening room while digitizing your collection for the road. $399.99.
sony.com 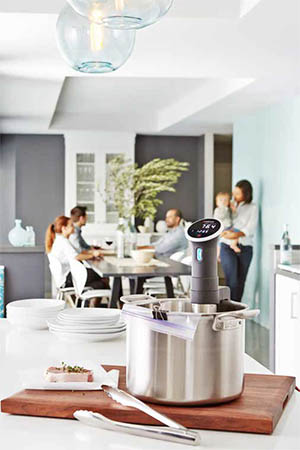 ANOVA PRECISION COOKER
Anyone who wants an easier way to do gourmet cooking needs the Anova Precision Cooker — essentially a water boiler that clips to a pot, allowing you to cook sous vide in a precise and efficient manner. Sous vide is a technique in which you fill a plastic bag with your ingredients and slow-cook them in boiling water. The result is a dish that retains all of its juices and flavor; the only thing left is to crisp it up a bit on the grill. This culinary tradition has been around for a while, but the Anova Precision Cooker allows you to automate the time and temperature, making gourmet meals even easier to prepare. The updated model has a better clamp that fits in a larger variety of pots. Other features include a circulation fan to move the hot water around and a laboratory-grade thermometer. $145.
anovaculinary.com 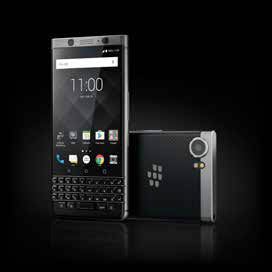 BLACKBERRY KEYONE
Touch screens are the norm for smartphones, but they don’t compare to the tactile feel of typing on a real keyboard, which is why many in the business community were hesitant to ditch the BlackBerrys of yore. Enter the KEYone, the company’s revamped phone designed to compete with Apple and Samsung. You get a full QWERTY keyboard underneath a 4.5-inch, 1620×1080 LCD touch screen. It’s not quite suited for reading articles, but people who spend a lot of time writing emails will appreciate the space on the display afforded by placing a physical keyboard below. The lower portion of the face can also act as a trackpad for your screen, recalling the original trackball BlackBerry for which BlackBerry was famous. $549, preorder.
blackberrymobile.com