IF PAST TRIPS TO MUNICH left the impression the offerings in this colorful and treasured German city are limited to mechanical clocks and historic beer halls, it’s time to take another look. Boasting two major universities, the warm and welcoming central Maxvorstadt neighborhood is notable for its walkability, eclectic museums and cluster of interesting new hotels and eateries. 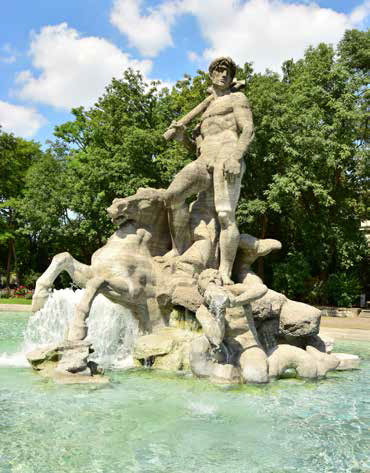 The neighborhood borders the city’s vast English Garden, larger in both scope and scale than Central Park. Seven academic centers, including two major universities, along with a compact museum area make this district a favorite with locals, students and visitors. Noteworthy monuments include the Neptunbrunnen (Fountain of Neptune) in the Old Botanical Garden Park; Karolinenplatz’s towering obelisk; and the Scholl Memorial, commemorating students Hans and Sophie Scholl, members of the Nazi resistance group White Rose who died in Munich-Stadelheim Prison.

Among the selection of outstanding museums, the Alte Pinakothek houses works by European masters and the world’s largest assembled collection of Rubens; the recently renovated Neue Pinakothek exhibits 19th-century paintings and sculptures. Enjoy newer, cutting-edge works by contemporary artists at the Pinakothek der Moderne and at Museum Brandhorst.

For lovers of classical sculpture, the Glyptothek is definitely an address worth visiting. Nearly completely destroyed during World War II, this restored museum gem houses Germany’s most comprehensive collection of Greek and Roman sculptures. Many of the exhibition’s pieces were discovered during excavations on the Greek island of Aegina at the site of the Temple of Aphaia. Highlights include the Barberini Faun, dating to about 220 B.C. and discovered in 1624 in Rome; and Kouros of Tenea, a sculpture of a young man who wears — for a Greek statue, at least — an uncharacteristically broad smile.

Relax and toast your day of exploration at James T. Hunt at 32 Schellingstrasse, Theresa Restaurant and Bar at 31 Theresienstrasse or popular Katopazzo at 87 Amalienstrasse. For brunch, lunch or dinner, dine like a local on the innovative menu at Cantine Cantona. While strolling allows for the best perspective of monuments and architecture (and the most direct access to cafés and bars) several U-Bahn metro stations in Maxvorstadt and Tram 27 make it easy to access and explore.

The holidays are right around the corner and it's time to start thinking about gifts for your wine-loving friends. If you or someone you know is planning an upcoming trip to a wine region, check out Argaux. The all-women-operated and -owned online wine shop and educational platform offers a series of tasting sets to celebrate and introduce some of the best wine destinations. The Gaux-To Tasting Sets are perfect for travelers to experience the wine before they travel — or without having to travel.

The Red Sea Development Company recently finalized its utilities deal with a consortium led by ACWA Power for The Red Sea Project, setting the development as the largest tourism project in the world set to be powered solely by renewable energy.

Uniworld Boutique River Cruises offers the chance to get up to $5,000 off per person on a 2022 sailing if booked by Nov. 30 as part of a Black Friday deal. This offer is valid on bookings made through Nov. 30 on cruises in 2022. Additionally, this deal can be combined with any publicly available promotion and standard River Heritage Club membership savings or benefits.

Peru-based hotel brand Inkaterra was named the first-ever “climate-positive” hotel brand in the world by GreenInitiative. Climate-positive can be defined as “any activity that furthers the achievement of net zero carbon emissions, providing an environmental benefit by removing additional carbon dioxide from the atmosphere.” Endorsed by the United Nations, GreenInitiative announced Inkaterra Hotels’ achievement upon measuring the company’s carbon footprint and offset.

Premiere luxury resort L’Auberge de Sedona debuts the Home for the Holidays experience to go with the resort’s holiday celebrations. Guests are invited to join in the festivities this year amid Arizona’s beautiful natural features like Oak Creek and Red Rocks.