Seventy is as high as I reached when counting the blacktip sharks that gracefully glided past our small dive group as they went about their midmorning rituals. They seemed unaware of our presence in their underwater world, about 100 feet below the incredibly clear water’s surface. When I reached 70 in my counting exercise, I was only about two-thirds of the way across the ever-moving wall of sharks in Fakarava’s South Pass.

As I floated, watching, what caught me by surprise was how calm and controlled my breathing was at that depth with all of that activity happening on every side. As my body gently swayed with the current, the sheer beauty of the scene unfolding before my eyes far outweighed any thoughts of fear or anxiety. A sense of peace washed over me as I watched in awe of the life simply existing in this undersea world.

Bora Bora, Tahiti and essentially all of French Polynesia occupy the prime spots on many bucket lists, their positioning bolstered by images of crystal-clear waters in gradients of blues, deserted white-sand beaches with reaching palm trees and dreamy overwater bungalows. For scuba divers, even more enticements may just nudge the destination to the No. 1 spot on the list.

With water visibility at about 130 feet, temperatures ranging from 79 degrees Fahrenheit in winter to 84 degrees in summer, and a difference of only about one-half degree from the surface to 166 feet below, you may be hard-pressed to find better diving conditions. Add world-class dive sites with myriad options of open water to advanced diving including lagoons, drop offs and passes, plus more than 1,000 species of marine life and 20 shark species, and diving in French Polynesia becomes even more appealing to those eager to plunge in. Marine life is so rich here, in fact, scientists consider the 2.5 million-square-mile Polynesia sea zone the “richest aquarium on Earth.”

During my week-long French Polynesian dive trip, I visited the islands of Tahiti, Fakarava, Rangiroa and Bora Bora, diving into the “aquarium” off of the latter three with TOPDIVE, realizing each of the islands has its own personality. Fakarava in the Tuamotu Islands archipelago, for instance, is known not only for the wall of sharks but also for its rich coral reef systems, vibrant schools of fish by the thousands and underwater passes with swift-moving currents that ramp up drift diving to seemingly warp speeds. 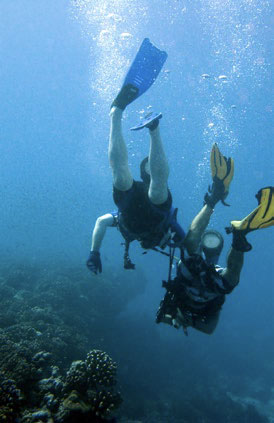 Likewise, marine life abounds in the waters surrounding Rangiroa, the world’s second-largest atoll, also found in the Tuamotu Islands. Here, 240 islets loop together more than 110 miles to completely encircle a deep lagoon known as Moana-tea, or Peaceful Ocean. On the other side of the chain of islets lies Moana-uri, or Wild Ocean, where you may spot larger marine life such as whales, manta rays, sharks and dolphins while drift diving. A highlight of one of my Rangiroa dives occurred when a pair of curious wild dolphins came close to check out our odd-to-them “pod.”

The calm, crystal-clear lagoons of Bora Bora in the Society Islands archipelago are full of marine life as well; bright, tropical-colored fish dart in and out of lively coral gardens while manta rays dance over underwater canyons.

Discover plenty of fun topside on non-diving days, too, like a personal Fakarava tour with Enoha, an islander who also shares a lagoon-front art gallery with his wife, Cecile. Or go off-roading on an ATV with Heiarii and Fakarava Adventure. Choose your own freshly harvested oyster (and, therefore, pearl) at a pearl farm, or hop onto a bike and explore the islands on two wheels. Of course, there is nothing wrong with sitting back, relaxing and soaking in the stunning atmosphere that surrounds the islands, especially after a day filled with diving.

Options for staying in French Polynesia are as varied as the dive sites and islands themselves. Choose from traditional Tahitian guesthouses, or pensions, such as Tokerau Village on Fakarava; a beachfront hotel like Hotel Kia Ora on Rangiroa; or a luxury resort such as Conrad Bora Bora Nui.

On the boat ride back to the north side of the island after our two dives in Fakarava’s South Pass, TOPDIVE dive master Mana and I chatted about the wonders of the undersea world we had just witnessed.

“If I could live my life underwater, I would,” Mana said as he gazed out onto the horizon. After spending a week in the undersea world of the Islands of Tahiti, I wholeheartedly understand his sentiment. Meaning “beautiful” or “making things superb,” Fakarava is thought to have inspired French painter Henri Matisse during his visit in 1930 and has been designated a UNESCO Biosphere Reserve.

The Islands of Tahiti are accessible via daily, eight-hour direct flights from Los Angeles (LAX) to Papeete, Tahiti (PPT), on Air Tahiti Nui. Within French Polynesia, Air Tahiti provides inter-island flights to more than 25 of the 118 outlying islands, making island hopping fast and easy so you can spend more time in the water.

Sofitel New York revived its Broadway-themed suite series in celebration of the first-ever Broadway revival of Funny Girl, now playing at August Wilson Theatre. The new Funny Girl suite will include décor inspired by the musical, and guests can now book the FUNNY GIRL Suite offer to enjoy the ultimate Broadway-themed stay.