But instead of seeing businesses quell fears with cancellations, Meet Puerto Rico says it recorded 57 new bookings from its March to May period across meetings, conventions and events through 2017. Milton Segarra, president and CEO, Meet Puerto Rico, says the direct spend potentially totals $20.4 million for Puerto Rico’s local economy.

During the summer of 2016 when Zika fears were at their peak, Meet Puerto Rico was on schedule to host 42 groups across 40,000 room nights with an estimated $32 million impact. Meet Puerto Rico also reported it was generating 260 new leads, a 7 percent increase over its 242 leads from the year prior.

Segarra credits its focused educational efforts to the meeting industry’s confidence in Puerto Rico. In addition, Puerto Rico’s tourism leaders, the government and the CDC also implemented preventative measures. For example, the Puerto Rico Tourism Co. and the Puerto Rico Hotel & Tourism Association collaborated on rolling out precautionary measures and initiatives in local hotels to protect against Zika. Some of the initiatives include spraying public areas to control mosquito populations, chlorinating swimming pools, offering welcome kits with the latest CDC guidelines on Zika safety and providing EPA-approved insect repellent at check-in.

That’s no small task on an island with 15,000 guestrooms and 1.3 million square feet of meeting space. Those numbers will swell as the Puerto Rico Convention Center District readies for expansive growth. It’s estimated by the end of 2017 the district will double its hotel rooms and commercial space from just four years ago. Plans are underway for new hotels, an entertainment center and a marina for luxury yachts.

Located in the Puerto Rico Convention Center District, the Sheraton Puerto Rico Hotel & Casino houses 503 rooms and the largest casino in San Juan. The Casino Metro features more than 400 slot machines and 16 table games in a modern, state-of-the-art setting. Travelers can unwind after a few hours in the casino with a massage at the Zen Spa Retreat or enjoy the hotel’s fourth-floor infinity pool and 57,000-square-foot sun deck. 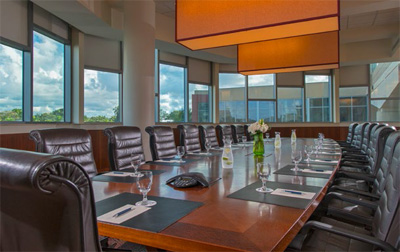 Another beachside option is The St. Regis Bahia Beach Resort with 26,557 square feet of function space around its Plantation House. In all, The St. Regis houses 139 rooms and 16 meeting spaces, including the John Jacob Astor Ballroom, and outdoor meeting spaces with ocean views.

For a more historic setting, planners book the Condado Vanderbilt Hotel. The famed Frederick William Vanderbilt originally owned the hotel after acquiring oceanfront land in the Condado District. Today the hotel is known for its stunning beachside property as well as world-class restaurants. The hotel’s Michelin-starred executive chef Juan José Cueva creates contemporary gourmet cuisine for the property. Choose from fine dining at the 1919 Restaurant and Ola Oceanfront, or try the aptly named Tacos & Tequila and Marabar Martini Bar and Lounge.

Breaking away from hotel restaurants, the favorite Marmalade Restaurant & Wine Bar remains a trendy spot for foodies. Tasting menus and wine pairings turn a leisurely lunch into a meeting experience for a small group.

For dinner in a trendy restaurant in the Condado Beach area, the three-story Oceano features a newly remodeled second floor with panoramic views. Its upstairs deck bar is available for meetings and gatherings.

Combine a unique experience with a meeting at the Carabalí Rainforest Adventure Park. Go horseback riding or roam the forests in an ATV. After a day of outdoor exploring, meet at La Cava del Terroir wine and tapas bar located on the grounds.

The cornerstone of Puerto Rico’s MICE industry is the Puerto Rico Convention Center Pedro Rosselló. It boasts a reputation as the largest convention center in the Caribbean — and also the region’s most technically advanced. The building accommodates groups of 10 to 10,000 with both interior and exterior function spaces.

Just 11 minutes from the PRCC, Luis Muñoz Marín International Airport makes travel easy with 588 non-stop flights to major cities in the United States, along with dozens of flights to the Caribbean and Central and South America. Leaving the passport at home and hopping over to the tropical U.S. territory is one of the appeals for American tourists and business travelers alike. The airport recently completed a $750 million renovation, with an additional $200 million in enhancements planned over the next several years.

Beyond the soaring PRCC and Convention Center District, Puerto Rico offers rich biodiversity and beauty. Ideal for outdoor enthusiasts, the island features a varied landscape with beaches, mountains and El Yunque, the only tropical rainforest in the U.S. forest system. Planners can organize “only in Puerto Rico” experiences like kayaking a bioluminescent bay and riding the world’s highest zipline.

Take a group stroll through the fortified historical grounds at the San Juan National Historic Site. Defensive structures were commonly built from the 15th to 19th centuries and protected Puerto Rico’s strategic point in the Caribbean.

Organize a daytrip to the nearby Puerto Rican island of Vieques and go snorkeling at Bahia de la Chiva. Spend the night to take a stunning tour of the glowing Bioluminescent Bay.

Host an event at Casa Bacardí and take a group tour of the famous rum distillery. Choose from a historical rum-tasting or a mixology tour.