NEW ZEALAND’S HUB FOR ARTS AND CULTURE is about to gain momentum as a mecca for MICE groups. As Auckland readies its upcoming New Zealand International Convention Centre, due to open in 2020, a slew of new hotel developments will introduce an additional 4,000 rooms over the next five years.

“The development of the New Zealand International Convention Centre means Auckland is able to be more competitive on the global stage for largescale business events,” said Anna Hayward, head, Auckland Convention Bureau. “At an impressive 32,500 square meters [nearly 350,000 square feet], with 33 meeting spaces and a 2,850-seat theater, the NZICC will be the largest and most versatile conference, exhibition and entertainment space in New Zealand.”

The NZICC will be five times larger than the current largest convention facilities in New Zealand and will be capable of hosting conferences of around 3,150 attendees and one-off events of around 4,000 people. It already proves a popular venue, with several conferences booked throughout 2020 and 2021. Projections indicate by 2025 Auckland will welcome more than 4 million visitors a year (58 percent more than now), creating an estimated $13.9 billion visitor economy (up 85 percent).

The expanded accommodation capacity of the NZICC will help support the forecast growth of Auckland’s business events sector, predicted to rise to $438 million in 2025, a 105 percent increase compared to 2014.

Auckland’s luxury hotel sector is particularly booming, according to Hayward, with a number of international brand names entering the market for the first time, including Four Points by Sheraton, The Ritz-Carlton, Park Hyatt and SO/Auckland, just recently opened. Plans are also in the works to expand the Auckland Cordis hotel, making it the biggest in New Zealand by room count. Its new 16-floor tower is scheduled to open in late 2020, in time for the America’s Cup and Asia-Pacific Economic Forum. The addition will include 250 rooms and increase its event space.

A host of hotels are also undergoing renovations. Castle Resorts & Hotels recently announced a 125-room hotel conversion: the Liberté Hotel, opening in the Aotea Quarter in 2019.

Sudima Hotels & Resorts also announced it will build a 200-room Sudima Hotel in Auckland’s city center, due for completion in 2020, complementing its existing property at Auckland’s airport precinct.

“Auckland is undergoing an unprecedented transformation, with more than $26 billion of public sector investment on top of the billions of dollars of private investment flowing into the city in the next decade,” Hayward said.

Major transformational projects include the Auckland City Rail Link — the largest transport infrastructure project ever undertaken in New Zealand. It allows the rail network to at least double rail capacity. New rail transport growth statistics suggest that by 2035, CRL stations will need to cope with 54,000 passengers an hour at peak travel times, compared to the original estimate of 36,000.

NZICC will connect to public transit and will lie a short ride from the Auckland International Airport. Hayward also notes all major central city attractions and venues will be no more than a 10-minute walk from the site. 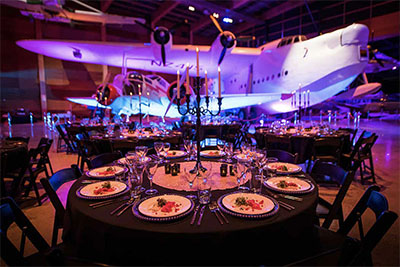 The Museum of Transport and Technology © MOTAT

According to Hayward, Auckland Council’s Planning Committee recently voted to pedestrianize Queen Street and some surrounding inner-city streets in the hope the city center will become a tourist destination itself.

Aside from the upgrade in its infrastructure, Auckland also ramps up its venue offerings. The Aotea Centre, currently undergoing a phased refurbishment. will transform to enable innovative performing arts activities and attract more world-class creative talent and events. Its interior refresh began in October, with the Centre set to reopen this month. Other popular options include the Auckland Museum – Tamaki Paenga Hira, known for its Neoclassical architecture, and SKYCITY Auckland Convention Centre, a conference venue accommodating 20 to 2,000 guests.

Another MICE option, Hilton Auckland, features a unique waterfront location and harbor views. The 165-room hotel offers seven multipurpose rooms overlooking the water and can host up to 700 guests. The ASB Waterfront Theatre, another unique conference and events venue, combines business with the city’s arts and culture scene. Located in the heart of Auckland’s Wynyard Quarter precinct, the theater complex offers several versatile event spaces with the ability to host more than 600 guests.

Located on picturesque Waiheke Island and just a 35-minute ferry ride from the central city, Cable Bay Vineyards offers space for business events, from an intimate board meeting to a dinner for 180 delegates.

One of Auckland’s icons and New Zealand’s largest transport, technology and social history museum, The Museum of Transport and Technology offers a range of unique venue spaces to host up to 800 people cocktail-style or 350 for a seated dinner. Across its 40 acres guests can dine among heritage aircraft in the Aviation Display Hall, suitable for award ceremonies, dinners and cocktail events, among other options.
motat.org.nz

The Auckland War Memorial Museum also caters to groups. The architecture of the building itself makes it a unique draw, including its Neolithic columns. MICE groups can enjoy a Māori cultural performance or experience a welcome surrounded by sacred taonga (treasures). Other options include a special after-hours exhibition tour or cocktails with dinosaurs.
aucklandmuseum.com

One of the city’s large-capacity venues, Shed 10 is a 100-year-old cargo shed full of history and offering views of Auckland’s Waitematā Harbour. Its industrial character, which groups can use as a blank canvas, represents an important remnant of Auckland’s early maritime heritage. The only original building still standing on Queens Wharf, it now serves as the default terminal for Auckland’s cruise industry and an events space perfect for a gala dinner for up to 800 people.
aucklandlive.co.nz/shed-10

Kauri Bay Boomrock, an experiential venue located about a 45-minute drive from downtown Auckland, sits on a private, 500- acre property with coastal views. It focuses on quality New Zealand cuisine, including a whiskey tasting option, and a wide range of on-site activities. Options include clay bird shooting, hot lapping with professional drivers, archery or a 4×4 all-terrain experience.
kauribayboomrock.co.nz