Within the fascinating city of Jerusalem, savor the goods at the Machane Yehuda Market, one of two current go-to destinations for dining and entertainment. The neighborhood’s shuk, or marketplace, has been in existence since the Ottoman period. Today it occupies an area from the Etz Chaim Yeshiva to the Beit Yaakov and from Jaffa Street to Agrippas Street.

“By day, it offers endless stalls of shiny, crunchy fruit and veg,” says Tarnopolsky, who also organizes gastronomic and wine-tasting tours, often with an archaeological edge. “By night, the alleys are taken over by everything from seedy bars to beer halls, romantic cafés, purveyors of kebab and homemade sausage kiosks.”

If you have limited time to spend, a great option to an organized tour is the Machane Yehuda Bite Card. The card allows holders to get a great sampling of the market’s offerings, including a freshly blended health drink, hummus, original market falafels or Georgian baked goods such as imaruly, a savory pastry stuffed with cheese or spinach. If you’d rather sit down in a restaurant, insiders advise making reservations several weeks in advance. 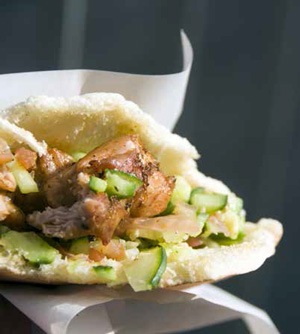 Elsewhere in the city, the First Station neighborhood vies with the Machane Yehuda marketplace in popularity. First in use in 1892 and serving as both the first and last stops on the rail line between Jerusalem and Jaffa, the First Railway Station of Jerusalem in the city’s Bakaa area emerged as another hot destination. Fully renovated, the station space includes the original building, reflecting 19th-century European Templar architecture, with the later addition of triangular arches on the first-floor roof.

Since reopening in 2013, area development extended to include three restaurants, a food market zone with a lively farmer’s market, plenty of food stands, a bar and an ice cream shop. The station building itself, which acts as the launch site for walking and other tours, houses a fascinating exhibition of historic photos and a popular culinary workshop center. Each Monday and Saturday, the station becomes the location for Artisans at the Station and an arts and crafts market. Regularly scheduled events are held throughout the week, with special events including festivals, live music and dance.