Factor in Fun at Your Next Meeting in Orlando

Orlando, the No. 1 travel destination in the United States, makes it easy to mix business with pleasure with its warm weather year-round, thriving arts scene and thrilling theme parks. Meeting and event planners find The City Beautiful appealing, too, with 150-plus meeting hotels offering a combined 5 million square feet of flexible meeting space to accommodate nearly any size group and more than 127,000 hotel rooms throughout the city. All told, it’s easy to see why Orlando is consistently named Cvent’s No. 1 U.S. meeting destination.

Traveling into the city is as easy as taxi- takeoff-land, with flights arriving at Orlando International Airport from across the country and around the world. MCO has been awarded Global Biorisk Advisory Council’s STAR Accreditation, the gold standard of safe venues, and its South Terminal Complex addition should open in 2022. The cornerstone of the airport’s $3.82 billion capital improvement program, the complex will house 15 new gates, allowing the airport to welcome an additional 10 to 12 million annual passengers.

In addition, a number of Orlando-area meeting hotels recently opened or are undergoing renovations to meeting spaces. The area’s newest luxury meeting destination, JW Marriott Orlando Bonnet Creek Resort & Spa boasts more than 50,000 square feet of event space, including a 22,000-square-foot ballroom. From the rooftop bar, guests can watch the nightly fireworks at Walt Disney World and then retreat to one of the resort’s 516 guestrooms and 81 suites. The new JW joins JW Marriott Orlando, Grande Lakes, closer to the Orange County Convention Center. 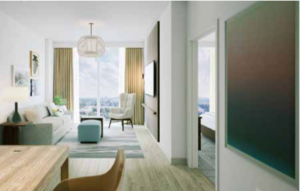 Renovations at meeting hotels and resorts in Orlando include 49,000 square feet of newly renovated meeting space for up to 1,750 guests at The Ritz-Carlton Orlando, Grande Lakes; the new 215,000-square-foot Peninsula Ballroom and breakout space at Renaissance Orlando at SeaWorld; and the completion of a $127 million renovation project at Caribe Royale Orlando that includes 220,000 square feet of total meeting space. Orlando World Center Marriott, undergoing a reimagining for completion in 2022, will see renovations of all 2,010 guestrooms and suites along with 24 new breakout rooms, each encompass- ing 1,200 square feet. At its completion, the resort will boast more than 450,000 square feet of flexible event space.

You know what they say about all work and no play. On the pleasure side of business travel, Orlando’s theme parks offer plenty of activity to keep everyone happy — it’s the Theme Park Capital of the World, after all. Jedis can travel to a galaxy far, far away at Star Wars: Galaxy’s Edge at Walt Disney World Resort, which kicked off “The World’s Most Magical Celebration,” an 18-month celebration of its 50th anniversary, on Oct. 1. The new Jurassic World VelociCoaster at Universal Orlando Resort races would-be paleontologists against dinosaurs on Florida’s fastest and tallest launch coaster, and want-to-be wizards take flight just like Harry Potter on Hagrid’s Magical Creatures Motorbike Adventure. Or cool off a bit on Florida’s first dueling-racer raft slide, the new Riptide Race at SeaWorld Orlando.

Before you go, download the new Visit Orlando app to make getting from meetings to restaurants to theme parks — and much more — easier than ever.

UNIQUE VENUES
This winter, Lake Nona Wave Hotel will open with more than 12,000 square feet of flexible event space in the tech- and medical-focused community. Two main draws of the community are its 130,000-square-foot Lake Nona Performance Club fitness center and the first-of-its-kind Chopra Mind-Body Zone and Spa headed by Dr. Deepak Chopra. With a keen focus on health and wellness affecting all aspects of our lives, hosting an event at Lake Nona Wave Hotel will prove an all-around win.
lakenonawavehotel.com

Add star power to any event at Madame Tussauds Orlando, in the heart of the city’s convention district. Following an exclusive VIP experience in the attraction, host up to 350 guests in the main hall or 160 in the Stage 3 event space. Afterward, spend time exploring the entirety of the ICON Park entertainment complex, complete with a 400-foot-tall observation wheel.
madametussauds.com/orlando

Get attendees’ motors running at the Orlando Harley-Davidson Historic Factory with an 8,000-square-foot showroom that can host up to 1,000 guests with, of course, an array of Harley- Davidson motorcycles on display. Vroom, vroom!
orlandoharley.com

The newest addition to Noble House Hotels & Resorts’ elite collection is set to debut in early 2022 in Cabo San Lucas, Mexico. The hospitality brand’s first venture into Mexico, the $100 million reveal of Corazón Cabo Resort & Spa will include a new-build tower featuring 204 rooms and suites, the highest and most luxurious rooftop bar in Cabo, two infinity pools and fine-dining eateries.