AS EARLY AS 1170, DUBLIN was an established town with a defined street pattern, a cathedral and even suburbs on the northern bank of the River Liffey. From 1171, Dublin became the capital of the English Lordship of Ireland and gained popularity at that time with English and Welsh settlers.

These days, travelers to Dublin likely arrive at Dublin Airport, about eight miles outside of the city center. Earlier this year, Aer Lingus launched its direct service into Dublin from Philadelphia International and Seattle-Tacoma International airports, and last month Air Canada began its summer route to Montréal-Pierre Elliott Trudeau International Airport. Upon arrival, it is easy to get to Dublin’s city center via bus. Dublin Bus, Airlink Express and AirCoach stop at various locations throughout the city, including rail stations; fares are about €6 (about $7) one way. Taxis (about €30, or about $35) and private cars (about €70, or about $83) are also available, making travel from the airport to your first meeting of the day seamless. Once within the city center, the light rail, known as Luas, easily whisks you from one part of town to the other with an easy commute, while the Dublin Area Rapid Transit takes you farther afield.

You’ll find plenty of options when it comes to a place to stay during your time in Dublin. Consider The Shelbourne, a 5-star, 200-year-old landmark hotel in the heart of the city; the Irish Constitution was drafted here in 1922. For a rock ’n’ roll feel, check into The Clarence, the 50-bedroom luxury hotel owned by U2’s Bono and The Edge, close to the River Liffey and Temple Bar. New on the block, near shopping on Grafton Street and the quiet of St. Stephen’s Green, the Iveagh Garden Hotel — “designed for the professional sector” — features luxury accommodations and a versatile meeting space.

Choose from traditional or modern fare when it comes to a power breakfast in Dublin. Housed in a classic Victorian building, The Café at Delahunt’s semi-private snug for up to eight colleagues offers a terrific spot to discuss business over a cup of coffee (chosen specifically for you by the barista) and pastries. For a heartier breakfast, dig into a Full Irish or Mini Irish (or opt for the Vegetarian Breakfast) in a pub atmosphere at O’Neill’s Pub & Kitchen on Suffolk Street. 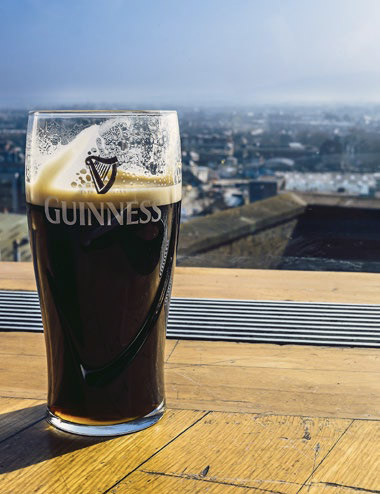 Pint of beer and view from Gravity Bar © NICOLAZINO | DREAMSTIME.COM

After a full day of meetings, it is time to let loose, and you’ll discover plenty of ways to do just that in Dublin. Head to Gravity Bar at the top of Guinness Storehouse and raise a pint of the Irish classic ale while taking in the 360-degree view of the city and beyond. If whiskey is more your cup of tea, take advantage of the premium whiskey tasting experience at Jameson Distillery, which first opened its doors to enthusiasts in 1780. For new twists on a classic, pay a visit to two new boutique distilleries opened in the city center: Teeling Whiskey and Dublin Liberties.

Of course, the traditional pubs with their live music and lively craic (or fun) found throughout the city always prove terrific spots to spend time with colleagues, old friends and newfound friends. A few that come highly recommended are O’Donoghues Bar and The Cobblestone, dubbed a “drinking pub with a music problem.” Or you can always head back to O’Neill’s Pub, where you may have had breakfast earlier in the day. And then there is Temple Bar, loaded with restaurants and pubs to enjoy well into the night.

For a different taste of the city, explore the Dublin Tasting Trail with Fab Food Trails, walking tours with experienced local guides who love food. Private walks are available, too, if you have a group with you. 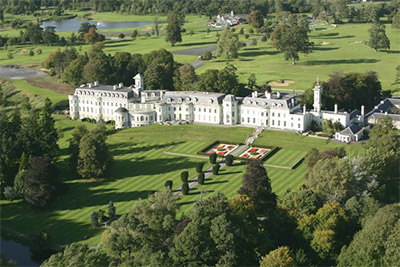 Another way to truly experience Dublin in your downtime is through its sports scene. Gaelic games such as hurling and Gaelic football are played at nearby Croke Park, a stadium that serves as the headquarters of the Gaelic Athletic Association and also hosts international musical acts. And don’t forget the world-class golf courses surrounding the city — for business and leisure — including Portmarnock Golf Club, Royal Dublin Golf Club, The Island Golf Club, The K Club and The European Club.

If you have time to venture outside the city when visiting for business, hop on the DART and take a ride to the heritage towns and seaside villages of Malahide (and its castle) to the north and Dalkey (and its two Norman castles) to the south. Within minutes you will be back in the city, revived by the fresh sea air and ready to tackle another day.

When it comes time to leave Dublin, travelers catching flights to the United States can take advantage of the U.S. Preclearance facilities at Dublin Airport. This means passengers will clear U.S. immigration and customs inspection prior to departing Dublin, making landing stateside and catching connecting flights smooth, quick and easy.