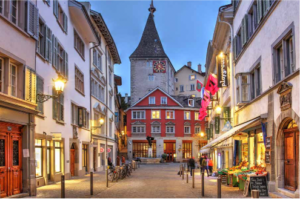 I’ve been going to Zürich for most of my life. Since I’m not an elite banker or an employee of IBM, Google or any of the other entities that cast the city as a world financial center, I’ve usually visited as a tourist — and most often (in recent years) to buy shoes and bags from designer Stefi Talman, who maintains an atelier in the Altstadt, or Old Town, where many creative shops, galleries, restaurants and bars occupy the narrow, cobbled streets, abundant with history. The alleys snake among timeless shadows, marked by ancient church spires and clocktowers. Steps away, the city’s eponymous lake edges the urbanity, a watery playground in summer and a meditative pool against an alpine backdrop that reflects the sky the rest of the year. I love the feeling in Altstadt of being lost in bygone centuries one moment, then thrust back into bracing modernity at the turn of a corner.

Behold firsthand contemporary Swiss efficiency and adeptness, traits that come particularly to play in Zürich, a compact metropolis with inimitable public transportation and culturally attuned, self-confident, hard-working denizens. One prominent Zürcher tried to explain Zürich’s seeming perfection, charming arrogance and unflagging ingenuity to me a decade ago: “We’re Swiss,” he said, shrugging. “Quality is in our DNA.” That nonplussed attitude toward competence might come off as staid — even boring or entitled. But that’s not the case. Zürich has long been habitually tenacious in looking forward. Consider that for centuries it harbored pioneers as diverse as Thomas Mann, Mozart, Chagall, Picasso and Goethe. Dissent brewed innovation throughout the centuries, with the Protestant Revolution erupting here in the 16th century, for example, and the Dada movement bursting forth in 1916 at Cabaret Voltaire. Innovation became as much a currency as the money in the city’s famous banks. Sometimes the avant-garde approach has been subtle, other times dogged and inspired, as in the development of the deliciously gritty Zürich West, now a trendy, flourishing area (hewed from an abandoned industrial expanse along the Limmat River, between downtown and the airport). Today the district buzzes, epitomizing the flair of modern Zürich.

When I asked Julia Müller of Zürich Tourism about the effects of COVID-19 on Zürich, Switzerland’s largest city and highly rated on most lists for livability, she didn’t hesitate to assure me Zürich never faltered. “Zürich hasn’t really changed,” she said. To make her point, she explained Europaallee and Zollhaus, two entertainment and residential districts in line to be developed and re-enlivened before COVID, reached completion during the pandemic. “They are now very lively quarters next to the main train station,” she said.

Equally impressive, in 2021 the new Circle Convention Center opened at the cutting-edge Zurich Airport. Comprising more than 54,000 square feet, it quickly became a meeting hot spot. Further living up to its self-dubbed moniker of “Smart Meeting City,” Zürich also finished the renovation of Tonhalle Zürich and congress center with the mission to attract green-conscious conventions and carbon-neutral events. The center’s location by the lake, the building itself — even the catering concept — ensure sustainability. Moreover, the center itself will offset any surplus carbon impact.

What’s new in Zürich?
In late 2021 the veil was lifted on a David Chipperfield-designed extension to the Kunsthaus art museum, making it the largest art museum in Switzerland and one of the biggest collections in Europe. The addition has been well-received by locals and guests. The area around the Kunsthaus generates a lot of buzz with the creation of a new art quarter; and galleries, including Eva Presenhuber and Galerie Bromer, have set up shop near the museum.

What local things do you suggest out-of-town friends do when they visit Zürich?
Discovering on foot the beautiful “bohemian” Seefeld district, where our hotel is located, with its many concept and interior stores, bars and restaurants. A tour on Lake Zürich — with one of our standup paddles, a pedalo or a lake cruiser. And, of course, they must enjoy our rooftop terrace with a spectacular view over the city, across the lake to the mountains.

Describe the attributes of your city and the people who live in it.
Zürich is charming and inviting, a hot spot considered a leader in terms of quality of life. From culture to culinary, the city offers what the heart desires. The location on the lake and the proximity to nature and safety make Zürich one of the most attractive cities in the world.

Zürchers are open-minded, interested in many things, well-traveled and linguistically adept.

What do business travelers need to know?
Zürich is easy to get to and to navigate. Daily non-stop flights arrive from several major U.S. cities. United Airlines recently introduced daily flights from Chicago and is resuming daily flights from San Francisco. Our La Réserve Eden au Lac Zurich lies just a 30-minute drive from the airport, and it offers the unique opportunity to have a quick swim in the lake after a long day of business.

Despite how hard they work, Zürchers (and Swiss in general) know how to turn it off and yield to repose. Though still fixed with a conservative, tightly wound reputation, Zürchers, in fact, play well. Strikingly, the city boasts more bars per capita than any other Swiss city, something to brag about considering places like St. Moritz have après-ski motivation. 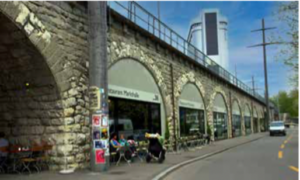 Eating out in Zürich is a citywide pastime, with young chefs making their culinary mark at restaurants such as The Artisan Kitchen and Urban Garden; vegetable-driven Neue Taverne; Michelin-starred Maison Manesse; and eccentric Frau Gerolds Garten, with a bar composed of shipping cargo boxes. To nibble from a tapestry of gastronomy, head to Markthalle, part of Im Viadukt, a collection of retail spaces built into a railroad viaduct in Zürich West. The foodie’s haven delivers with an assortment of edible delights, plenty of food and drink outlets and counters. In terms of something classic with a creative twist, Gamper is a Swiss bistro, and Rosi does cosmopolitan- esque Bavarian with a sense of humor. Cocktail bars, such as Negroni-focused Sacchi Bar and Widder Bar, an imbiber’s institution, draw revelers. Chic wine bars abound. For sweets, step into Confiserie Sprüngli, a beloved icon since 1836, for crunchy-on-the-outside, melt-in-your-mouth macaroons called luxemburgerli. Tours of the Lindt Home of Chocolate, an interactive museum, also never fail to sate.

Outdoor buffs can hike and ride bikes (or sled or snowshoe in winter) at Uetliberg, Zürich’s own mountain. On Lake Zürich, a world of boating awaits, not to mention swimming, paddleboarding and sunning. The Limmat River also offers tours.

A culture lover’s mecca, Zürich boasts some 50 museums, including Kunsthaus Zürich, renowned for its post medieval-era European artwork, especially modern masters such as Monet, Picasso, Kokoschka, Beckmann and Warhol. Visit Gothic Fraumünster Church, home to five colorful, captivating, 1970s-era stained-glass windows by Marc Chagall. The fusion of old and new, the contrast between the church and windows, mirrors the spirit of Zürich.

COMING AND GOING
To travel to Switzerland, U.S. citizens must hold a valid passport. In May 2023 the European Travel and Information Authorisation System for Americans is expected to launch, at which time a valid ETIAS visa waiver will also be required to travel to Switzerland. The application process is fast, efficient and fully online.

Baur au Lac
Regal and posh and a member of Swiss Deluxe Hotels, like the others on this list, the grande dame opened in 1844. With four restaurants, it sits among gardens on the lakeshore.
Glärnischstrasse 18
$$$$$

The Dolder Grand
Perched above Zürich on a hill, featuring stellar views, this swanky hotel is known for its spa, gastronomy and art collection. Historic and castle- like, the hotel sports a contemporary redo by Norman Foster.
Kurhausstrasse 65
$$$$$

La Réserve Eden au Lac Zurich
Emblematic of Zurich’s old-meets-new vibe, this villa-like hotel on the lake features a recent bold reimagination by Phillipe Starck, who wanted it to feel like a floating yacht club.
Utoquai 45
$$$$$

Michelin-awarded, this understated eatery pays homage to vegetables, letting them be the star of the show. Choose the surprise, multicoursed menu matched with wine, or order á la carte.
Glockengasse 8
$$$

INFO TO GO
Zurich Airport, linked by train, lies 6 miles from the city center. A main hub for Swiss International Air Lines, it serves more than 200 destinations with direct flights. Trains and the S-Bahn run daily from the airport to Zürich Main Station (free with purchase of a Zürich Card). Taxis are also available, with fares costing about $46–72 for the 15-minute ride.