HIGH UP IN THE MOUNTAINS with views of the Pacific coast, the weather in Monteverde’s Cloud Forest Reserve is surprisingly cool for a Central American locale. A perpetual dampness creates a slick layer of moss that covers the branches and trunks of trees. Thick vines drop down from towering ficus trees, and clay-covered trails are laden with fallen passion fruit.

As we followed Mauricio Ramirez, an impassioned naturalist who truly loves his job, he gave us cilantro and cinnamon to smell, told us what part of the palm tree to cut to find the meaty heart of palm, stuck a flashlight into a hole to spotlight an orangeand brown-colored tarantula and had us swing from one of the vines à la Tarzan.

“This is impressive,” Mauricio said as he set up his telescope quickly. I peered in and my jaw instantly dropped as I made out the bushy white eyebrows and wide eyes of a crested owl staring right back at me. “Holy cow!” I blurted out as Mauricio chimed in with “Beautiful, yes, beautiful.”

I’ve had the pleasure of returning to Costa Rica a half-dozen times since that initial walk with Mauricio in 1999, and each time I leave, I feel grateful I had another chance to explore this magical country. Blessed with a lush interior that rivals Hawai’i and a tropical setting that’s home to three types of monkeys, slow-moving sloths, vibrant-colored scarlet macaws, toucans and 45 different species of hummingbirds, it comes as no surprise Costa Rica ranks as an increasingly popular getaway. A mix of rainforest, mountainous cloud forest, volcanoes and exquisite Pacific beaches, the country is about the size of West Virginia. 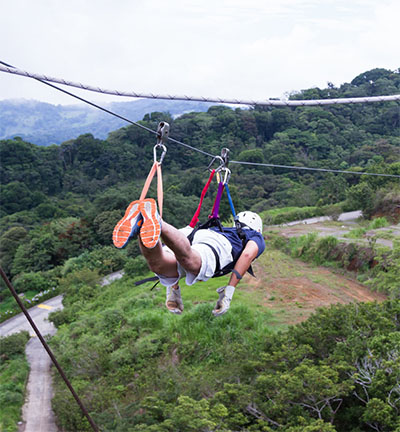 For active travelers, Costa Rica offers one of the best playgrounds in the Americas. A perfect introduction to the landscape, the often-overlooked Central Highlands on the verdant back slopes of Poas Volcano lie less than a 90-minute drive from the international airport outside the capital city of San José.

On a visit to the small farming community of Bajos del Toro, I took a horseback ride with my family in meadows that climb the hillside. This was no easy ride on a dirt road at some touristy stable. We rode high up the slopes, trotting through streams and stopping at a dairy farm to milk the cows and feed a 5-day-old calf. Then we galloped through this small farming village of 300 to see the requisite church, school, soccer field and bar.

That afternoon, we took a two-hour hike leading to three waterfalls hidden within the cloud forest bordering Poas. Walking along a stream, we picked blackberries, felt soft elephant ear leaves and peered at golden beetles as they crossed the trail. Here during the heart of the green season in mid-summer, torrential downpours can pounce in the late afternoon hours, only enhancing the verdant interior. We crossed a bridge and soon encountered our first waterfall, cascading down a rock crevice. The waterfalls became more picturesque the higher we hiked, especially the final waterfall, named “The Promise,” plummeting some 200 feet down the rocks into a natural pool of water.

“I can’t believe we’re all alone,” said my daughter, Melanie, dipping her toes into the cool waters.

A two-hour drive northeast of Poas takes you to Arenal, one of the most active volcanoes in the Western Hemisphere. On a night I remember vividly, my friend Jeff and I watched a river of red flow down from the peak’s crater. Even as we woke the next morning, we could hear the hammering of the eruptions and see puffs of smoke from the smoldering lava. We spent the afternoon mountain biking on dirt roads at the base of this perfectly cone-shaped volcano whose beauty rivals Osorno in Chile and Mount Fuji in Japan.

A must-stop on any Costa Rican itinerary is Manuel Antonio National Park, a sliver of a rainforest bordered by a sublime stretch of Pacific coastline and backed by a ridge of cliffs. Only 800 people are allowed to visit this small (a little more than 1,600 acres) national park each day, so it’s best to arrive when the gates open and hire a trusted naturalist with telescope in tow. Everything looks better when viewing creatures with a highpowered telescope: the bulging eyes of a dragonfly, the furry hairs of a tarantula, the electric blue coloring of a butterfly’s wings. Yet it’s hard to top the monkeys, which we soon found chasing after one another on the beach. 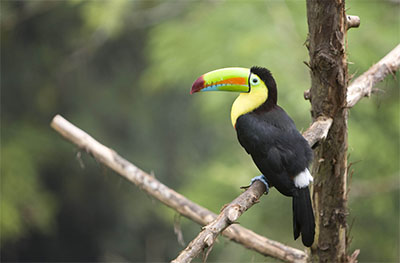 The nearby city of Quepos once housed the workers for the Chiquita banana corporation. These days, palm oil plantations replace the banana fields. We drove through one of these vast plantations and then headed high into the hills to sample the sport of zip lining. The zip line tour, now ubiquitous, originated in this country and can be found in all types of terrain. Cruising above the rainforest or cloud forest canopy, immersed in the greenery, you experience an unparalleled feeling of freedom.

For me there are still more adventures at hand. The swells on the Pacific attract surfers from across the globe. A slew of rivers like the Pacuare and Sarapiqui feature whitewater rapids that lead rafters on adrenalin-pumping rides. Caño Island off the coast of Osa Peninsula and the Catalina Islands near the beaches of Guanacaste boast two fine dive sites. Another easy flight from North America and I’ll be back.

Less than an hour from San José International Airport, you arrive at the flanks of Poas Volcano and the lush countryside surrounding it. Arenal Volcano sits about a 2.5-hour drive northwest of the airport, while Manuel Antonio National Park lies just outside of Quepos on the Pacific coast, a good three-hour drive with traffic from San José. Monteverde and the cloud forest are also a three-hour drive from San José.

Where to Stay in Costa Rica

ARENAS DEL MAR BEACHFRONT & RAINFOREST RESORT On the outskirts of Manuel Antonio National Park spacious suites nestle into the rugged cliffs overlooking the Pacific. On your deck you may find a white-faced monkey peeking out of a branch. Manuel Antonio, Puntarenas Province $$$

EL SILENCIO LODGE & SPA Tucked into the verdant hillside of the farming community of Bajos del Toro, where we went horseback riding and hiked to the waterfalls, El Silencio makes the ideal first stop in the country. Bajos del Toro, Alajuela $$

THE SPRINGS RESORT & SPA AT ARENAL Home to 28 hot springs; a 14,000-square-foot spa and fitness center; and postcard-perfect views of the Arenal Volcano, The Springs proves the place to relax after all your adventure in the region. Arenal, Alajuela $$$