FROM THE CHARMING BRICK-LINED streets populated with 18th-century homes to the salty tang carried by the coastal breeze, the historic city of Annapolis proves a memorable, year-round destination for both business and leisure. Located on Chesapeake Bay within Anne Arundel County — which boasts a full 520 miles of coastline — Annapolis has been tied to America’s history since the United States’s earliest days as a nation. It even served as its shortterm capital from November 1783 until August 1784.

Annapolis’ vivid history remains one of its major credentials as a compelling tourist destination in addition to its position as the hub of American sailing. The city is home to the United States Naval Academy, St. John’s College and the Maryland State House. Built in 1772 and notable as the location where the Treaty of Paris was ratified in 1784, this particular address bears the singular distinction of being the oldest statehouse in continuous legislative use within the United States. The historic building’s architecture includes the largest wooden dome in America to be constructed entirely without nails.

Tourists also flock to Annapolis to admire lesser-known historic sites such as the Hammond-Harwood House, sheltering a collection of John Shaw furniture and paintings by artist Charles Wilson Peale. Other favorites include the Paca House and Garden, built by Declaration of Independence signer William Paca. This elegant 18th-century Georgian mansion is particularly known for its terraced Colonial-design garden. 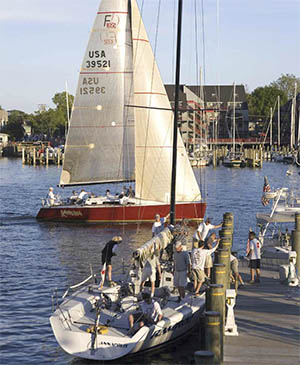 “Tourism is a major player in the city’s economy, ranking second only to state government,” explains Connie Del Signore, president and CEO, Visit Annapolis and Anne Arundel County. “Unlike many destinations, we are not seasonal. There’s something going on year-round — even our sailing season lasts most of the year.”

Popular experiences include Wednesday Night Sailboat Races and Saturday ArchiTrex Tours that explore the city’s architecture and unique stories in depth. In May visitors can enjoy the Chesapeake Bay Blues Festival; in June themed festivals include Annapolis Greek Festival, Annapolis Italian Festival and Annapolis Irish Festival. The United States Naval Academy also hosts a Distinguished Artist Series that will this year include the Russian National Ballet.

This robust annual calendar, coupled with a stunning geographic setting, is a definite factor when it comes to the city’s attraction as a MICE location. Besides the downtown area, popular meeting settings include the shopping and casino area conveniently located near Baltimore-Washington International Airport just outside the city. According to Del Signore, these elements not only hold attraction for meeting planners weighing the merits of various sites, they’ve also proven a significant factor in high meeting attendance. “From walking, food and history tours to getting out on the water and special events,” offers Del Signore, “there’s always something for delegates to do.”

Current development projects include the $200 million flagship Live! Hotel located at Maryland Live! Casino adjacent to Arundel Mills Mall, due for completion spring or summer 2018. Features of the 350,000-square-foot property include 310 luxurious guestrooms, a 17-story hotel tower, a spa, multiple dining venues, a 1,500-seat concert venue and a stateof- the-art event center that includes an expansive space unobstructed by columns.

Annapolis and its immediate area are rich in American history. The site of the Battle of Baltimore in 1814 — and the inspiration for Francis Scott Key’s “The Star Spangled Banner” — Fort McHenry National Monument is less than an hour from Annapolis and accessible from I-95, just off Exit 55. From there the site is clearly signposted. Excavations have been ongoing at the park’s active archaeology site since 1958. Visitors can enjoy viewing an impressive collection of artifacts amassed over the decades, housed within the on-site museum. Among the 30,000 items so far uncovered are personal objects ranging from leather shoes and buttons to accoutrements of war such as mortar fragments and cannonballs.

Visitors can enjoy a wide range of dramatic nature settings within two hours of the city. Two of the best are Cascade Falls in Patapsco Valley State Park and Great Falls Park between Montgomery County, Md., and Fairfax County, Va. Located near the town of Elkridge, Cascade Falls includes a 2.4- mile loop trail with year-round access. At Great Falls, the splashing waterfalls result from water from the Potomac River forcefully cascading through Mather Gorge. Visitors can hike to viewing points along established trails leading to the water from the Visitor Center. The area is especially attractive for birding enthusiasts, while specially designated cycling paths are available for more active outings.

Stoneacre Hospitality Group expanded its suite of offerings with the grand opening of the remodeled Chart House Inn in Newport, Rhode Island. Situated in the city’s historic district, the inn’s lengthy history adds character and charm to each room and suite. Its proximity to many of Newport’s restaurants, shops and museums makes it the ideal place to stay for a New England vacation.