Airplane travel evokes a lot of emotions these days: excitement, anticipation, uncertainty and nervousness, just to name a few. But when you do take to the skies again, the giddiness of getting pampered at 35,000 feet can most certainly wash away the surrealness of the past year and a half — at least for the duration of a long- haul flight — as you sip Champagne and slip your feet into plush slippers. While some global airlines have paused or pushed back plans for upgrades and refreshes to their premium cabins, others have introduced exciting changes that await in your pod or lie-flat bed in first and business classes. What’s more, amenities like privacy screens, sliding suite doors and space to spread out all serve a dual purpose as methods to luxuriate in the air while keeping social distance. Here are some nice- ties to expect now and in the near future, from retrofitted seat configurations to updated décor to Michelin-starred meals:

EMIRATES
This past year, U.A.E.’s flagship carrier debuted the latest version of the Airbus A380 aircraft, whose 14 first-class private suites are slightly wider with taller doors than the original. Cabin details and finishes have been refreshed with the new Ghaf tree motifs and a champagne color scheme, as well as wood paneling and bronze accents. The aircraft also includes a newly refreshed OnBoard lounge. The 76 seats in the A380’s business-class cabins have been updated with champagne-colored leather covers and wood finishing inspired by executive jets. The airline, which just reopened the first- and business-class lounge at LAX and its dedicated First Class Lounge at Dubai International’s Concourse B, hopes to continue reopening lounges around the world as travel returns. 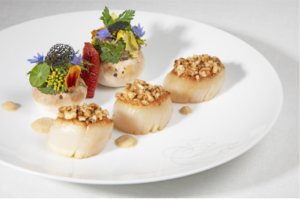 SINGAPORE AIRLINES
A recent enhancement in business-class cabins on the flag carrier of Singapore is personal amenity kits for every flight lasting six hours or more. Developed in collaboration with renowned British perfumer Penhaligon, a company established in 1870, each luxury kit contains hand lotion, lip balm and facial mist in an attractive bag that can be reused after the flight. The selected scent, Quercus, is clean, citrusy and suitable for men and women. For passengers in first class and suites, the airline partnered with Lalique for luxury amenity kits with high-end personal care items. SIA currently operates flights from New York ( JFK), Los Angeles (LAX) and San Francisco (SFO) to Singapore (SIN) and will reinstate service from Houston (IAH), Newark (EWR) and Seattle (SEA) as conditions permit.

CATHAY PACIFIC
In August the Hong Kong airline introduced two state-of-the-art Airbus A321neo aircraft, with plans to add a total of 16 to the fleet by the end of 2023. The planes are intended for short-haul flights, initially from Hong Kong (HKG) to Shanghai (PVG), Guangzhou (CAN), Hangzhou (HGH), Qingdao (TAO), Kaohsiung (KHH) and Taipei (TPE). The aircraft are the first to feature Cathay Pacific’s newly designed Regional Business Class Seat, offering 12 of these next- generation, hard-shell recliner seats that give passengers a cozy, cocoon-like feel. They include divider screens for privacy and 15.6-inch 4K Ultra-HD personal TV screens for in-flight entertainment.

KOREAN AIR
Due to COVID-19, meals in the airline’s Prestige (business) Class are served in individual packages and lunch boxes to reduce physical contact. The First Class Lounge at Incheon Airport remains closed at press time, but the Miler Club Lounge offers lunch box service with Western and Asian selections. Korean Air is in the process of acquiring Asiana Airlines, South Korea’s second-largest airline, after which we will no doubt see exciting news and updates in the premium cabins.

QATAR AIRWAYS
This past June the state-owned flagship carrier of Qatar launched its new Boeing 787-9 Dreamliner, which comes with 30 new Adient Ascent business-class suites arranged in a herringbone 1-2-1 configuration. The contemporary design is personal, spacious and functional; each has direct aisle access with a sliding door for privacy. Suites include wireless charging technology and a seat that transforms into a 79-inch fully flat bed. Passengers enjoy a wide selection of international cuisine and beverages including vegan options; and in-flight amenities include products from well-known brands like Narumi, BRIC’S, diptyque, TWGTea, CastelloMonte Vibiano Vecchio, and The White Company. 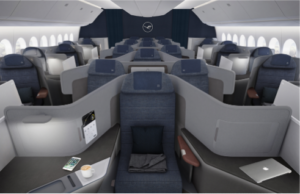 LUFTHANSA
The German carrier plans to launch its new business-class offering in 2022. Seats will be in a 1-1-1 configuration, with a center seat “throne” that offers maximum privacy and personal space; passengers seated side by side are angled away from one another, with a privacy screen that can be lowered for those traveling together. Seats will be lie-flat, with a headrest that can support a shoulder for side sleepers, and there will be much more storage and shelves. A tablet will control entertainment, light and ventilation; and wireless charging will be available. Travelers can sip Champagne at the in-flight bar.

BRITISH AIRWAYS
As part of its centenary celebration in 2019, the British airline unveiled new first-class cabins on its Boeing 777-300 aircraft. The cabins have the look and feel of those on BritishAirways’ Boeing 787-9 and 787-10 aircraft, with the addition of a sliding door which turns a seat into a suite. Other amenities include male and female loungewear designed by British brand Temperley London. Bespoke amenity bags with Temperley’s “Star” design are filled with essentials from Elemis, including its Ultra Smart Pro-Collagen line, to cleanse, revive and hydrate. Once the airline switches from boxed meals due to the pandemic, it plans to offer new menus focused on fresh, seasonal ingredients served on bone china from tableware designer William Edwards.

DELTA AIR LINES
In the first half of 2022 Delta expects to take delivery of its first Airbus A321neo aircraft, each of which will include 20 seats in first class. The aircraft will be the first to include Delta’s new first-class seating design, which touts extra privacy; a larger and sturdier tray table with 25 percent more workspace; a fixed headrest with increased privacy and better sleep; enhanced memory-foam cushions; and three times more space to stow personal items, including dedicated laptop and water bottle stowage. 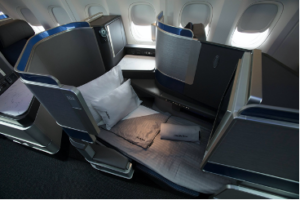 UNITED AIRLINES
As of late last year, United finished reconfiguring all international Boeing 777-200s to include Polaris business- class pods (generally 50 of them), meaning you no longer have to wonder whether the cabin on your flight has already been retrofitted. The retrofits to Polaris pods on the Boeing 767-300s and 767-400s, as well as the 787-8 and 787-9 Dreamliners, will continue. As of press time, the airline was working to reopen its existing Polaris lounges; plans for additional locations, including Washington Dulles, had been put on hold due to the pandemic.