LIKE THE NAME “NEW YORK,” the moniker “Abu Dhabi” applies to both a geographical region and the principal city within it. And like NYC, the city of Abu Dhabi, capital of the United Arab Emirates, sprawls across the mainland and interconnected islands. During the last half-century, like its glitzier neighboring emirate, Dubai, Abu Dhabi exploded from a sandy village into a gleaming modern metropolis of towering high-rises, mammoth luxury shopping centers and prestigious museums, offering a range of venues for hotel stays and entertaining.

The original commercial center developed on the namesake core island in a district just below its waterfront Corniche, crowned at one end by the Sheikh’s Presidential Palace and the nearby Emirates Palace Hotel. Locals maintain the Emirates Palace, its Moorish-style architecture decorated with flourishes of white marble and gold, is still the desirable location to propose holding a meeting with the Crown Prince. But the business center has moved.

About 10 years ago, Sowwah Island was designated the country’s new financial epicenter. Today renamed Al Maryah, it boasts the stock exchange; the free-zone Abu Dhabi Global Market; the headquarters of dozens of international banks and blue chip companies; the Cleveland Clinic, touted as the Middle East’s finest hospital; and a range of upscale support facilities, including the glitzy Galleria luxury mall.

“When you come to do business, you go straight to Al Maryah and check into the Four Seasons or Rosewood Hotel,” claims a lawyer who frequently flies in from the United States for meetings. With its vertical exterior inspired by traditional textiles, the Four Seasons offers a meeting place for fellow travelers and stylish locals. Outfitted with sofas and armchairs, its Al Meylas lounge emerged as the emirate’s “living room” for meetings, tea and socializing. Five function rooms, four with floor-to-ceiling windows, come equipped with up-to-date technology.

In the nearby Rosewood, guests gather in the airy Majlis Lobby Lounge for an early breakfast or quick business lunch. Its newest restaurant, Dai Pai Dong, decorated with Chinese art and artifacts and a live-show kitchen, offers an all-you-can-eat dim sum lunch. 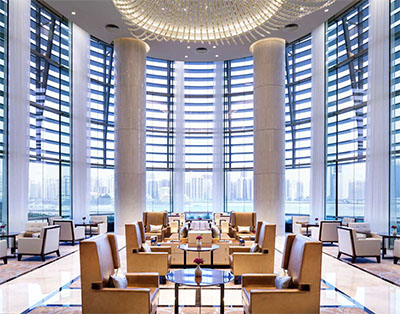 For dining out, visitors declare the emirate has “every restaurant known to man.” Notable on Al Maryah are the signature Italian venue Roberto and La Petite Maison featuring cuisine Niçoise. Sushi, maki rolls and seaweed salad are served Izakaya-style for table sharing at Zuma, and the porterhouse and onion flower at Nusr Et Steakhouse earn acclaim.

Business visitors should be aware Abu Dhabi residents on their home turf are apt to reverse invitations and invite guests to meet at their homes. Accept graciously if invited; flowers or chocolates are appropriate to bring along as a gift.

While the total emirate encompasses 375 square miles, the metropolitan area is fairly compact, and some visitors prefer the comparatively old-world flavor around Qaryat al Beri. It lies midway between the airport and downtown near the Souk, the vast Abu Dhabi National Exhibition Centre and the gleaming Sheikh Zayed Grand Mosque. In the lush, winding waterways of the Shangri- La Hotel, Qaryat al Beri complex, boats float guests past shores lined with arabesque arches to their rooms, spa facilities and the traditional Arabian market. A golf course lies nearby, and the hotel’s five meeting and function rooms feature state-of-the-art audiovisual equipment. Middle Eastern cuisine served all day in its restaurant Sofra bld is prepared at multiple live cooking stations to allow interaction with the chefs.

Adjacent to the Abu Dhabi National Exhibitions Centre, the Hyatt Capital Gate hotel provides direct access to the Middle East’s largest convention facilities. A convenient retreat from the 12 overwhelming exhibition halls, the hotel’s comfortable library/lounge overlooks the city skyline. Named for the 18-degree incline of its dramatically sloped exterior, the Hyatt’s 18 Degrees has been voted the emirate’s best Mediterranean restaurant.

To get away from it all, the chic, modern Museum Café in the newly opened branch of The Louvre on cultural Saadiyat Island serves international dishes from sea bass to camel burgers. Luncheon cruises on a picturesque double-decker wooden dhow depart from the Marina Mall and serve a 5-star international buffet catered by the Hilton Abu Dhabi. Tee times can be booked at four nearby golf courses.

Metered cabs serve Abu Dhabi International Airport, about 20 miles from downtown, and charge around $25–30 to Al Maryah. Arriving passengers can pre-book Golden Class hospitality services which greet arrivals, assist with baggage collection and escort clients to ground transportation. Remote check-in is available at the downtown City Terminal, or departures can be aided with fast-track check-in, immigration, passport control and guidance escort to gates at the airport. VIP gold lounges can be booked for layovers and delayed flights.