VANS, CARS AND MOTORBIKES (known as “motos”) whizz around Independence Monument at the junction of Norodom and Sihanouk boulevards, while vendors push two-wheeled carts of eggs down the dusty numbered streets, announcing their presence through megaphones affixed to their carts with twine. Only on major thoroughfares do drivers of the deluge of vehicles obey the rules of the road. Elsewhere, it’s every moto for itself. Phnom Penh’s grid of streets is the epitome of chaos, but amid the dense tropical humidity that hovers imposingly over the Cambodian capital, tranquility can come in the most unexpected moments.

With one of the world’s largest concentrations of nongovernmental organizations, Phnom Penh hosts a fair number of events and conferences for nonprofit professionals. As such, the gradually growing Southeast Asian city evolved to meet the needs of visiting professionals and their personal entourages. With a recently enhanced city-wide bus system, a year-old train connecting the airport to the city and an infrastructure investment of $300 million during the past five years, Phnom Penh makes strides — long overdue by some cities’ standards — that finally bring the Kingdom of Cambodia’s biggest city into the present day.

Between ducking in and out of open-air markets and attempting to find pedestrian-friendly sidewalks, it’s easy to get swept away by Phnom Penh’s turbulent environment; but buried beneath the revving of motos and tuk tuks, you’ll discover a people deeply rooted in history and tradition. 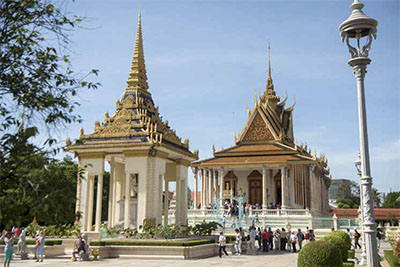 The Royal Palace offers an ideal starting point for an all-ages journey through the Kingdom’s capital. This residence of Cambodia’s royal family provides insight into centuries of history. Built in 1866 by the current king’s great-grandfather, the solid-gold roof tiles, crystal Buddha statue and Silver Pagoda offer just a glimmer of the opulence adored by the royals. Although the family’s living quarters are not accessible to the public, visitors can tour the grounds around the Silver Pagoda, the Throne Hall and the Chan Chhaya Pavilion for $10.

Just beyond the gates of the Royal Palace lies the city’s riverfront, where a promenade stretches north to south along the Mekong River. Here, restaurants serving a global palate of cuisines line the parallel quay. Keep your eyes peeled for sandwich boards advertising boat tours for all ages, granting passengers a unique perspective of the city from the river’s edge.

A stroll north along the river and a left turn on Street 94 eventually reveal Wat Phnom, a Buddhist temple — the city’s tallest religious monument — commemorating the founding of Phnom Penh. Rising from the center of a traffic circle, Wat (Khmer for “temple”) Phnom (Khmer for “hill”) stands 88 feet tall and dates to the 14th century, when legend says a woman named Penh discovered a small golden Buddha statue at the site. To this day, the temple remains in use and is considered the geographic central point of Phnom Penh.

About a mile southwest of Wat Phnom sits Central Market, Phnom Penh’s largest and liveliest open-air market. The four arms of this humming shopping center warrant a visit if only to spy local shoppers bargaining back and forth with vendors for the best prices on everything from homewares to clothing to fresh fish from the Mekong. 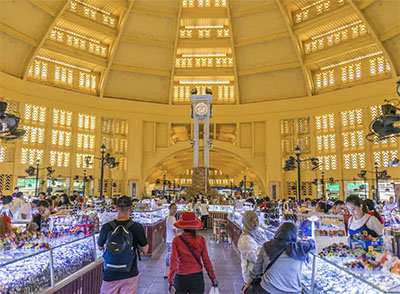 For an air-conditioned consumer pastime, step into the international oasis of Eden Garden, a brand-new facility with shops, a cinema, bakeries and even a Starbucks, absent from the Kingdom until recently. Visitors to Eden Garden can taste the world without leaving Phnom Penh, as its restaurants serve American, German, Japanese, Singaporean, Thai and Khmer cuisine.

Instead of eating what you could probably find back in your home country, consider learning how to cook local by booking a cooking class at Feel Good Cooking School. Sign up the family for a class where you can learn to make three traditional Khmer dishes. The school supports the Feel Good Café, a social organization that trains and encourages locals to pursue their aspirations in business and the culinary arts.

If you happen to visit Phnom Penh during the rainy season and face the daily afternoon monsoon, head to Kids City, a 10-story indoor play facility with activities for all ages, including go-karts, a gym and a toddler area. Those seeking reprieve from the tropical heat can gather the family in a rental car or taxi and travel to The Kingdom Resort and Spa, where a refreshing pool and water slides await.

Despite the immediate culture shock that shakes many a Western visitor, finding a sense of solace in Phnom Penh is as easy as speaking with a smiling local.

Phnom Penh International Airport is the largest of Cambodia’s three airports. Bus 3 of the recently integrated bus system takes travelers from the airport to various points throughout the city for 1,500 KHR (about $0.37) 5 a.m.–8:30 p.m. Tickets can be purchased on the bus. For $5, the even newer KK Star Airport Express bus operates every 30 minutes during peak hours and every 60 minutes off-peak. Tickets can be purchased in the airport, and the route makes eight stops throughout the city, with a final stop at Toyoko Inn on Street 78 near the Swan Bridge.

Small groups with light baggage can hire a tuk tuk, a small carriage pulled by a motorbike. Normally, passengers should negotiate the price before agreeing to ride, but airport tuk tuks charge a standard fare of $7–12, depending on the destination. A final transportation option is a traditional taxi; fares range $9–15 depending on the distance.

Where to Stay in Phnom Penh

RAFFLES HOTEL LE ROYAL A few blocks from Wat Phnom and a city institution since 1929, the hotel features local Khmer and French colonial design and serves as a center of the city’s social scene. 92 Rukhak Vithei Daun Penh $$$

KHÉMA PASTEUR An exquisite French eatery a few blocks north of Independence Monument, Khéma serves elegance in every dish, from six different egg brunches to loose teas to entrées such as beef bourguignon and coq au vin. Corner of streets 228 and 51 $$

TOPAZ France and Cambodia coalesce on the plate at Topaz, where a rotating door of Michelin-starred guest chefs bring diversity and unique flavors to diners who have a little extra money to spend on extravagance. 162 Preah Norodom Blvd. $$$$