I WAS MILES OFF THE coast of India in a small wooden fishing boat on the Arabian Sea when I first got the feeling we were being followed.

Manned by a shirtless captain and a crew of two local fishermen from Goa, our boat was stocked only with tiny hooks wound around wooden planks by thinly weighted line (the traditional “fishing rod” in Goa) and two coolers — one filled with fresh catches of the day and the other empty, having been slowly depleted of ice-cold Kingfisher beers as the day went on.

Apparently I wasn’t the only one who sensed the followers, and as the captain slowed the boat’s low-powered engine to a halt, our small crew froze and grew silent as the boat was soon surrounded by a playful pod of dolphins lapping up the last few hours of sunshine before the setting sun started to cool the water’s surface for the night.

Those happy dolphins annually swim long distances to make it to the peaceful shores of Goa, but they’re not the only ones to discover the magic of this remarkable destination. Each year nearly 53,000 visitors make the trip to Goa to soak in the sun, sand and sumptuous lifestyle this pint-sized Indian state provides.

Goa is the beach destination of choice for many affluent travelers looking to unwind and let loose while in India. The state sits about midway down India’s southwestern coastline between Maharashtra to the north and Karnataka to the east and south; and although it is the smallest state in the country, it is one of the richest states in India.

Once isolated from the rest of India due to its mountainous borders and unnavigable alluvial plains, Goa doesn’t abide by the same set of rules the rest of the country follows. Over the years, everyone from the Silaharas and Rashtrakutas to the Bahmanis and Kadambas have governed the state. While each dynasty left its noticeable mark on Goa’s unhurried establishing identity, the biggest influence on the culture in the state came during the Portuguese colonization of 1510 that lasted until Dec. 19, 1961, when the Indian Army liberated the state and welcomed it as the 25th state of the Indian Republic.

European influence made a huge impact on daily life in Goan culture, affording equal civil rights to both genders in all legal and religious matters. Those progressive civil codes blended with the state’s remarkable multihued past to create a distinctly tolerant and open environment where residents are just as likely to observe the traditions of Diwali as they are to gather together for Christmas celebrations.

This free-spirited vibe attracted a huge number of open-minded tourists and expats in the early 1960s, and for years Goa was best known as a wild destination for all-night trance parties and a haven for hippies seeking religious harmony. For decades the palm-lined coasts of Goa were littered with people walking around in a haze from full-moon parties and smoky sunsets over the Arabian Sea. But all that changed in recent years as the hippies have since dispersed, leaving behind organically pristine beaches ripe for tourism.

As of 2017, more than 30 5-star luxury hotels and resorts operate in Goa, like the Grand Hyatt Goa with its lavish suites towering above 28 acres of lush, tropical landscape thriving along the stunning backdrop of Bambolim Bay. The resort remains a favorite for celebrities and leisure tourists with its 313 guestrooms and seven unique dining options, including international cuisines and the authentic Indian restaurant Chulha featuring an interactive kitchen, live tandoor sections, a chaat counter and a cocktail bar with local libations.

The Wicked Liquid Brunch on Sundays at the resort’s Dining Room has become the place to be for locals and guests, where more than 20 different food and beverage stations await diners while a local band serenades the crowd. The liquid menu alone includes everything from in-house herb-infused spirits and coffee cocktails to detox drinks and health juices, with an extensive pour-your-own drink station of high-end spirits, sparkling wines, local beers and more. 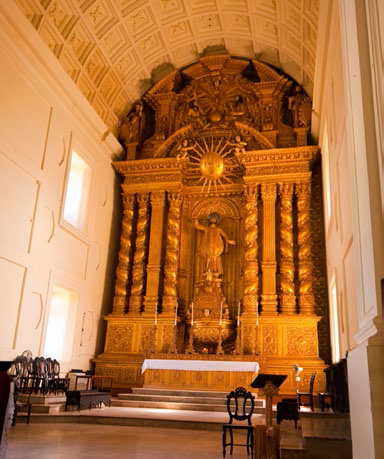 The hotel holds the remains of a 16th-century chapel, and just a short drive off the property visitors can get a bigger picture of the Indo-Portuguese architecture with a quiet drive along Old Goa Road. The road winds through the countryside and passes a handful of small villages dotted with heritage homes adorned with elaborate features. Near the end of the road sits one of the few UNESCO World Heritage sites in Goa, the Basilica of Bom Jesus, which holds the remains of St. Francis Xavier.

Like the rest of the country, markets are big business in Goa, but Goa’s expansive Mapusa Market is massive even by Indian standards. The market opens daily except Sundays, but Friday mornings prove the best time to go since the number of vendors nearly doubles, offering visitors miles of shops selling fruit, spices, clothing, home décor, handcrafted instruments and more. Late risers don’t have to miss out on the market experience, as the city also holds a Saturday night market every week in Arpora. The Ingos Saturday Nite Bazaar kicks off at 6 p.m. and features items like Kashmiri carpets, silver jewelry and clothing from international designers. It’s a great place to grab a bite to eat, but to get a real taste for Goan cuisine it’s best to head to one of the many restaurants nearby.

Goan food differs greatly from traditional Indian dishes, focusing instead on fresh seafood with a signature blend of sweet and spicy flavors bursting with fresh coconut, blistered chilies and tons of spice. Sample some of the most authentic dishes at Bhatti Village, famous for its crab and coconut curry called “crab xec-xec”; Zeebop by The Sea, renowned for its fresh catches of the day like whole fish stuffed with a spicy red sauce called “reichardo”; and Branco’s, serving arguably the best beef chili fry in the region. But even the locals don’t eat Goan food on a daily basis. Most nights will find the city’s stylish set socializing on the terrace of the chic Greek restaurant Thalassa, which also doubles as the best spot to watch the sun go down over the long stretch of beach below the restaurant along the Arabian Sea. 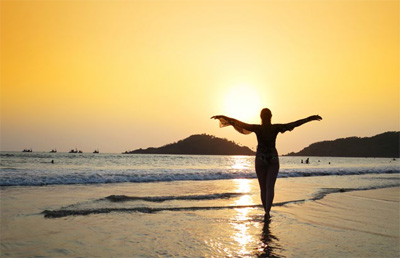 Nightlife is still the biggest draw to a Goan vacation, even though the trance parties have lost their popularity. The hottest clubs in the region offer a unique experience, like the “nightclub in the sky” experience at Club Cubana with its progressing maze of terraces and bars that wind their way to the top of the city, or the brand-new private club experience at SinQ with its glass-walled microbrewery and 20 reservation-only party suites.

But Goa is so much more than a place to stay out late, and for every nightclub in the region there is a spa or yoga studio. Wellness has become a major focus in Goa over the last few years, and apart from unwinding on the serene sands of Agonda Beach or Mandrem Beach, some of the most popular activities include sunrise tai chi sessions on the beach, yoga retreats at Ashiyana Yoga Retreat Village or a balancing Ayurvedic treatment at Shamana Spa.

Where to Stay in Goa

THE LEELA HOTEL GOA The 152 rooms at this luxury hotel range from Lagoon Suites to Royal Pool Villas and showcase a lavish blend of Indian ambience with Portuguese aesthetic.
Mobor, Cavelossim, Salcette $$$$$

BHATTI VILLAGE This family-owned restaurant is where the locals go when they want authentic Goan cuisine. It’s not fancy, but its daily rotating menu means the food is always fresh.
Nerul Village $

A REVERIE This design-driven restaurant offers a theatrical approach to imaginative cuisine, with dishes like chicken lollipops and the vegetable art canvas topping the menu.
Calangute $$$

Thalassa Not only does this boho-chic restaurant serve fresh seafood with a Greek twist, but it’s also one of the few restaurants in the region open on Sunday.
Vagator $$

As Valentine’s Day approaches, it’s time to start thinking about romantic getaways to spend some quality time with your special someone. Chile has been recognized as one of most romantic destinations in South America, making it an ideal Valentine’s destination. Of course, you don’t need to wait until Valentine’s Day to make a romantic trip to Chile.

Here’s a destination some nature lovers and adventure travelers may still not have on their radars: the northernmost Emirate of Ras Al Khaimah. Visitors can explore endless dunes via horseback or camel, then settle into an Al Wadi Desert camp such as Sonara, where experiences include entertainment and dining beneath star-filled skies.