TAIPEI IS A BEEHIVE OF ACTIVITY, as you would expect of a city as populous as Chicago, but those are not bumblebees you hear at every intersection. They’re motorized scooters, the vehicles of choice for most young Taipei residents. These noisy two-wheelers, compact, agile and just a little edgy, fit Taipei’s mood to a T.

Numerous carriers offer flights to Taiwan Taoyuan International Airport — 12–14 hours non-stop from Los Angeles or 15–16 hours from New York City. Upon landing, take one of the frequent MRT express trains from the airport to downtown Taipei, which covers 31 miles in 38 minutes. You can then grab a cab to your hotel; taxis also prove the best way to get around the city.

The Regent, a third luxury hotel, sits next to an underground shopping street, letting you escape from the noise and usually polluted air at street level. Other leading hotels include Grand Hyatt, Sheraton Grand, Mandarin Oriental, Le Méridien and Kimpton.

The first thing your Taipei client is likely to ask is, “Have you eaten?” Reflecting the importance of food in Taiwanese culture, it’s as common a greeting in Taipei as “How are you?” in Tulsa. It’s meant to be rhetorical — just say, “Yes” (or “shi”) — but not always. Expect to be invited to a meal or a drink soon after meeting clients, unless you beat them to it. But where do you dine?

Hotel restaurants prove a good — and easy — choice, especially when they come with a view. The W offers two of the best: Yen, serving New Cantonese cuisine on the 31st floor, and The Kitchen Table, with diverse international fare, three meals a day, on the 10th floor. Not to be eclipsed, Palais de Chine’s 17th-floor Le Palais earned three Michelin stars for its Chinese cuisine. But you’ll find most of central Taipei’s best restaurants at street level. 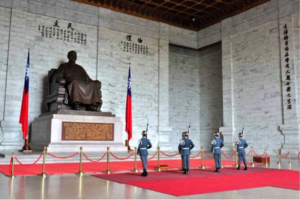 Have a day off? Take the elevator to the 91st-floor observation deck of Taipei 101, the world’s tallest building when it opened in 2004. You can shop across the street at Breeze Nan Shan, a futuristic new mall. For a look back in time, choose among visits to the National Palace Museum (8,000 years of Chinese art), palatial Chiang Kai-shek Memorial Hall, and Longhsan and Xiangtian temples. Stop by the outdoor Jingmei or indoor Shilin night markets, too, for a taste of street food and Taiwanese culture.

If you can add a few days to see more of Taiwan, consider taking a bus or van tour. Visit nearby Fulong or Dawan Kenting beach if you’re a beach lover, Yangmingshan National Park if you have the hots for hot springs, Taroko National Park if you enjoy mountain hiking (the narrow gorge road switchbacks to a 10,744-foot peak), Sun Moon Lake if you like to bike (rent one to trace the 18-mile perimeter trail) or take the 215-mile high-speed train ride to the coastal city of Kaohsiung to traverse most of this island nation in less than two hours.