The City of Barcelona Lures Visitors for Memorable Events and Art

As travel for events resumes, the urbane metropolis of Barcelona, which once hosted more than 200 conferences in a year, beckons anew as a welcoming destination for meetings, incentives, conventions and exhibitions. The temperate, seaside resort city — which curves along the Mediterranean at the foot of Mount Tibidabo and a mountain called Montjuïc — sits in the northeast corner of Spain, about 100 miles south of the French border, easily accessed via non-stop flights from major gateways. Barcelona showcases an architectural legacy dating to Roman times, which visitors can view at Casa de l’Ardiaca, site of a portion of an early Roman wall and a replica of the original aqueduct.

Among the city’s four dedicated convention centers, where conferences convene in auditoriums, lecture halls and meeting rooms, the newest and largest is Gran Via Conference Centre — a venue of Fira de Barcelona, a major trade show organization. Designed by Pritzker Architecture Prize winner Toyo Ito, it accommodates 1,272 in one of its 70 conference rooms. The 1 million-square-foot Barcelona International Convention Center is an avant-garde, sea- front building which hosts 15,000 delegates, while another exhibition and meeting venue, CaixaForum, resides within one of the best examples of industrial modernist architecture in Barcelona. MICE attendees also have options to meet in the seafront World Trade Center or at fairgrounds, a beach club, a fútbol stadium (Camp Nou), an Olympic stadium and various museums.

Barcelona celebrates its Catalan culture, especially the legacy of artists whose work lures visitors to the city. Two different museums house the collections of Pablo Picasso, who was born and studied art in Barcelona, and Joan Miró, who created the eponymous foundation which displays his work. The city itself serves as the backdrop for the iconic and extravagant works by Antoni Gaudí. Inside the unfinished, Art Nouveau-style Sagrada Familia cathedral, begun in 1882, spires soar as light streams through tall, Gothic, stained-glass windows. On the rooftop terrace at the lavish Palau Güell, off La Rambla, and throughout the family’s phantasmagorical Parc Güell complex, colorful broken- glass and tile mosaics range across undulating surfaces. 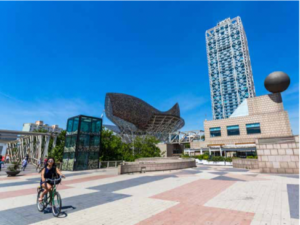 In a redecorated historic building, Le Méridien Barcelona enjoys an ideal location on La Rambla and offers fabulous street-scene views from the recently renewed Restaurant CentOnze. Schedule an event in any of seven meeting rooms, four of which combine into one; in the top-floor spa, with its outdoor deck and whirlpool; or on the Grand Terrace or Panoramic Terrace. Edition, a highly designed, 100-room, Ian Schrager hotel near Santa Catarina market and the cathedral, features meeting spaces in Bar Veraz; the speakeasy-style Punch Room; in penthouse suites; in the underground Cabaret; and on The Roof with a view, pool and fitness center.

Business visitors are lucky, indeed, when a meeting takes place in Barcelona.

From Montjuïc’s Miramar cable car station, visitors soar over the old port to the popular Torre d’Alta Ma seafood restaurant in Tower de San Sebastian, a freestanding, 200-foot-tall, latticework tower which opened in 1931 and offers 360-degree views. The restaurant serves modern Mediterranean cuisine and can accommodate 120 people; you can book the whole restaurant for private events or selected areas for smaller groups.
torredealtamar.com

Celebrate summer’s arrival with the new Gili Go Surfing Summer offer at Gili Lankanfushi Maldives. In addition to three days of surf instruction from the pros at luxury surf company Tropicsurf, the multiday offer also includes a one-hour lesson in the calm lagoon.