For the month of February, the world’s eyes will look to Beijing as the 2022 Winter Olympics kicks off Feb. 4. Much like the 2020 Summer Olympics, the games are awash in concern over the COVID-19 pandemic as well as swarmed in controversy connected to human rights issues. The uncertainty has created an environment that could make one wish for Olympics events of the past, when the Games were synonymous with universal pride and a sense of togetherness that overcame cultural differences and geographic boundaries.

At past Olympic venues around the globe, echoes of this emotive backdrop still permeate the air. At many, communities and Olympics fans alike joined together to keep the Olympic spirit alive long after the athletes left, providing travelers with the perfect mix of historic significance and modern thrills.

Of them all, one destination stands as a stalwart, unchanging representation of Olympic heritage: Lausanne, Switzerland, the official Olympic Capital of the world and home to the International Olympic Committee. The fourth-largest city in Switzerland, Lausanne gained the status as Olympic Capital in 1994, though it was home to the International Olympic Committee as early as 1915. The city’s Olympic Museum attracts around 300,000 visitors each year with its more than 1,500 artifacts and exhibitions on the Games.

However, for all its Olympic lore, Lausanne itself never hosted the Games. For that, travelers must look elsewhere in Switzerland. On the other side of this small country, about a five-hour drive away, St. Moritz, in the region of Graubünden, awaits as a two-time Winter Olympics host.

“Winter sports have always been a huge part of Switzerland’s heritage, particularly the canton of Graubünden and St. Moritz, where the second Winter Olympics ever were held in 1928 [and] then again 20 years later,” commented Tamara Loeffel, head of business development, Graubünden.

For the most immersive Olympic experience possible, travelers can book a stay at Kulm Hotel St. Moritz. The property boasts the ice-skating rink used for the Games and which now hosts ice skating and curling competitions throughout the year, along with everyday usage and lessons. The Olympic Bobrun is also located on the property. It is the oldest bobsleigh track in the world as well as the only one still in existence that is naturally refrigerated. 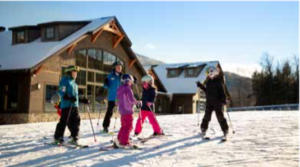 Stateside, in Lake Placid, New York, visitors to the Adirondacks find further Winter Olympic fun, as well as a bevy of recent enhancements and improvements made at the region’s many Olympic venues, used in both the 1932 and 1980 Olympic Winter Games. The past few years brought improvements at a range of new venues including at the Mount Van Hovenberg complex, with its skeleton and bobsled track (as well as the longest mountain coaster in North America); Whiteface Mountain Ski Area; the Olympic Jumping Complex; and Lake Placid Olympic Center. Located in downtown Lake Placid, it houses the area’s Olympic Museum and was the site of the U.S. hockey team’s 1980 Miracle on Ice.

Many of these changes are in partial preparation for the FISU World University Games, slated for January 2023, but the benefits extend to every traveler. Along those lines, Lake Placid Village has been undergoing a reconstruction initiative to benefit travelers of all types, not just those in town for the Olympic heritage, with changes that make the village more pedestrian-friendly as well as improve the overall aesthetic.

But Lake Placid isn’t just beloved by Olympic fans. It’s also a hot spot for athletes, churning out talent at a remarkable rate. “The village’s Olympic legacy is unmatched. Lake Placid has sent at least one athlete to every Winter Games and, in total, has sent over 100 athletes to compete since the first modern Winter Games in 1924,” explained Michelle Clement, director of marketing, Regional Office of Sustainable Tourism. “Other area athletes have also claimed Olympic glory, including Andrew Weibrecht, a two-time Olympic medalist in Super-G; Billy Demong, a two-time Olympic medalist and Olympic champion in Nordic Combined; and Chris Mazdzer, an Olympic silver medalist in men’s singles luge. This is accomplished through Lake Placid’s commitment and support of its Olympic sports development programs.”

To the west, 2022 marks an important year for the Olympic venues in Salt Lake City, as the destination celebrates its 20th anniversary of hosting the 2002 Olympic Winter Games (with an anniversary celebration taking place downtown Feb. 12). In fact, Melanie Welch, director of marketing and sponsorships, Utah Olympic Legacy Foundation, credits the Games for putting Salt Lake City on the map for both international and domestic travelers, in 2002 and today.

“The Utah Olympic Legacy venues are five times busier today than they were following the games,” she said. “All three venues host international, national and regional competitions as well as year-round training, drawing athletes and their families from around the world. All three venues also offer Olympic experiences for visitors throughout the winter and summer.” Bobsledding, ice skating, cross-country skiing, winter tubing, ziplining, ropes courses, alpine slides, freestyle shows: They all await at the organization’s Utah Olympic Park, Utah Olympic Oval and Soldier Hollow Nordic Center.

The Olympic Games bring many destinations to the forefront of the travel community’s attention, though. British Columbia, much like Salt Lake City, chalks up a renewed influx of traveler attention to its 2010 Winter Games.

“People from all over the globe tuned in, where they quickly discovered what a wonderful destination British Columbia is, and as a result, many of these viewers turned into visitors,” said Kristen Learned, corporate communications specialist, Destination British Columbia. “Between February 2010 and February 2011, tourism spending related to the Games was estimated at $463 million CAD. International flight bookings to Canada doubled in 2010 over 2009, and the legacy of our Olympic venues and attractions continues to draw visitors year-round, especially in the host communities of Whistler, Richmond and Vancouver.”

Officials at Tourism Richmond said the Games made a particular impact on what they call a “lesser-known destination.” Today Richmond is home to North America’s first Olympic Museum, the Richmond Olympic Experience, as well as the Richmond Olympic Oval, originally a long-track speed skating venue. The destination took advantage of pandemic-related closures to update and add to its Olympic venues. When the museum and oval reopen this year, they’ll offer even more ways to experience British Columbia’s Olympic heritage, such as with a new Train Like an Olympian experience, which officials anticipate will be “a major draw for visitors.”

But before Canada hosted the Winter Olympics in British Columbia, it did so in Calgary, in 1988. There travelers find Canada Olympic Park. But Dale Oviatt, senior manager of communications, WinSport (the operational name for the Calgary Olympic Development Association), is quick to note the Olympic landscape in Calgary evolved since the 1980s.

“WinSport has built one of the top halfpipes in the world to go along with an FIS-sanctioned slope-style course. Calgary has also become a main training center for Canada’s freestyle skiing and snowboarding athletes,” he said. And the evolution is hardly complete, with renovations for the sliding track — used for bobsleigh, skeleton and luge — planned.

“In 2022,” he added, “visitors can try their hand at skiing or snowboarding, taking in the summer bobsleigh or zipline or visiting the Markin MacPhail Centre, highlighted by four NHL-sized hockey rinks and a high-performance training center, where hundreds of Canadian athletes, mainly winter, train… .”

The Olympic spirit lives on at these historic venues and at the more than a dozen other Winter Olympics host destinations throughout the world. In many ways, the Olympic spirit is like that of the intrepid traveler — adventurous, determined and unifying, with a love for legacy but always with an eye to the future. The next time your travels bring you across an Olympic host city or venue, consider stopping by — you might just find more inspiration than you bargained for.