Measuring 427 square miles and comprising 18 districts, Hong Kong remains one of the most densely populated places in the world. Also ranking as one of the most developed (and expensive) cities globally, it boasts a significant financial center, commercial port and the largest number of skyscrapers of any city in the world. Hong Kong’s impressive financial and institutional power combines with a hybridized culture that seamlessly fuses East and West. 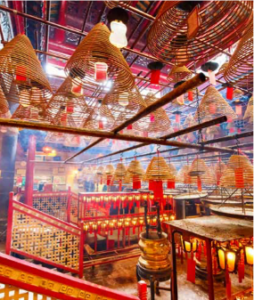 Beneath the skyscrapers, locals and savvy visitors know Hong Kong as a city of street stalls, markets and temples. An appreciation for the honored traditions of the past — like the truly remarkable Man Mo Temple in the Sheung Wan District — represents the city’s lifeblood.

Discover the dual aspects of Hong Kong at 70 Michelin-starred restaurants and authentic dai pai dong cafés. Hong Kong has elevated the rooftop bar to an art form. Check out The Ritz-Carlton’s Ozone, the highest bar in the world; Sevva on the 25th floor of the Prince’s Building in the Central District; and Sugar in the EAST hotel in the Quarry Bay District.

Hong Kong’s art scene garnered international attention in the 1940s when it developed into a filmmaking hub and further blossomed in the 1970s and 80s with Bruce Lee’s fame. Its current arts hub is West Kowloon Cultural District, one of the largest cultural projects in the world. Stretching across 98 acres, the district is steeped in old traditions combining modern art, theater, dance and crafts. This visionary development features the Arts Pavilion, the Xiqu Centre, Freespace, the Art Park and the recently opened masterpiece M+ museum.

Perhaps Hong Kong’s most well-kept secret, its stunning great outdoors encompasses 70 percent of its land volume, featuring some of the finest hiking trails in Asia in addition to the UNESCO Global Geopark.