Take a Haunting Tour of Legendary Bran Castle … If you Dare

The road turned to gravel as we veered off the winding main street of Bran toward the Romanian villa we had rented for the night. The air was crisp and smelled like apples and moss as my husband and I drove with our windows down through a grove of trees bursting with bright amber and crimson leaves. We had arrived in Transylvania on Oct. 31, Halloween, but instead of ghouls and goblins, we encountered a pastoral storybook setting in which white woolly sheep grazed among the outskirts of a sleepy Saxon village filled with colorful houses as medieval church bells echoed in the distance. It appeared more like a scene from Beauty and the Beast than from anything with a sinister plot … until I looked up.

Bran Castle, better known as Dracula’s Castle, loomed in the distance, perched high on a steep, craggy hilltop overlooking the Turcul River below. A rust-colored roof rested atop weathered white stone walls which curved and angled sharply before blending into a base of rugged raw stones. Erected by the Knights of the Teutonic Order along a popular Carpathian Mountain trade route, the castle dates back to 1211. It wasn’t until 100 years later that the fortress took its current form as a foreboding castle and its 57 chambers and winding hallways began to yield stories and legends that would last throughout the centuries. Stories of Hungarian kings, Transylvanian Saxons, Romanian royals and even Ottoman sieges have all been etched upon the castle’s historic walls, but a fictional bloodthirsty count most marks the castle’s notoriety.

Irish author Bram Stoker never visited Romania before or after he penned his 1897 novel Dracula, yet despite having never seen the castle in person, Stoker’s description of the fictional Transylvanian count’s castle bears an uncanny resemblance to the castle in Bran. In his novel, Stoker writes Dracula’s castle sits “on the very edge of a terrific precipice … with occasionally a deep rift where there is a chasm [with] silver threads where the rivers wind in deep gorges through the forests.” No other castle in Transylvania comes close to the vivid descriptions throughout the book, and it’s commonly believed Stoker relied upon Romanian legend and descriptions of the castle while forming the setting for his notorious novel.

Many also believe Stoker based his soulless antagonist on Vlad Tepes (aka Vlad the Impaler or Vlad Dracul), the Romanian prince of Wallachia known for his short temper and his penchant for impaling those who wronged him … of whom there were many. Prince Vlad never actually ruled Bran Castle — although some accounts report he was held prisoner at the castle for two months and possibly attacked it once — yet the connection once again remains uncanny. Since the 1960s the castle has been eternally associated with Stoker’s fictitious bloodthirsty count. 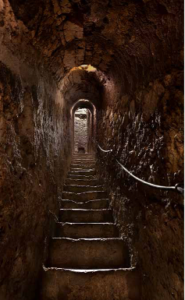 Entrance to the castle is open to the public seven days a week throughout the year, with self-guided walking tours available for roughly $11 (senior, student and child discounts available; children under 7 are free) until 4 p.m. each day. The torture museum — not for the faint of heart — is available as an add-on, as is the brand-new Time Tunnel exhibit that takes guests 102 feet below the castle in a glass-enclosed elevator through a reinforced ancient well to a multimedia show of bats, dragons and Romanian folklore. But it’s on Halloween when the castle stays open long past dusk to welcome visitors (18 and older) looking for a more immersive and hair-raising experience.

My husband and I read the warning on our tickets with smiles on our faces before handing them over at the base of the 200-foot hill: “Be cautious if you suffer from claustrophobia or are sensitive to intermittent light and loud noises,” and then joined a line of costumed tourists trekking up the hill toward a castle bathed in a crimson light art glow. We wandered through the castle freely, only encountering Count Dracula once for an impromptu photo shoot in the corridor between the bed chambers before making our way to the inner courtyard. There, castle staff handed out heavy pours of “Dracula’s Blood,” a robust red wine, as fairies danced in the courtyard and groups with painted faces and plastic vampire teeth snuck extra helpings of the “blood.” The scene offered just a small taste of what was yet to come, so we passed quickly by Dracula figurines and bottles of “Dracula’s Blood” in the gift shop before making our way to the tented after-party at the bottom of the hill.

The party raged on until dawn, when sweaty skeletons and danced-out vampires began their journeys back to their beds. The experience ended dramatically differently from the way Stoker wraps up his novel, but the memories of a Halloween spent at Bran Castle remain equally as haunting.

INFO TO GO
The nearest international gateway to the castle is Brasov-Ghimbav International Airport, located less than a 30-minute drive from the castle; however, it is currently under construction and slated to reopen by the end of 2021. Henri Coanda International Airport in Bucharest is a bit farther (156 miles or 183 miles, depending on the route) but offers the chance for a stunning road trip through the Carpathian Mountains. It connects with major European hubs; rental cars are available from major rental operators.

7 Reasons to Put Nice, France, on Your Travel List

It’s time to start dreaming of your next trip. Here’s some destination inspiration for you. Take a visual journey through Nice, France, with us.