WHETHER OR NOT YOU FIND THE noun “icon” overused, you cannot deny Beverly Hills is full of them. Since the city’s incorporation in 1914, these symbols embody the apex of the American Dream. The signs are everywhere — literally — from the shield-shaped city limits markers to its zip code and the oft-filmed and-photographed Beverly Hills Hotel.

Like some of the celebrities who call it home (or, at least, their second home), Beverly Hills works diligently to keep up with the times, especially with numerous nips and tucks leading to its 100th anniversary. However, recent happenings provide plenty of proof it has more going for it than its looks and status.

“Our city founders would have had a hard time visualizing contemporary Beverly Hills,” affirms Mayor Julian Gold. “Even Fred Hayman, who originated the Beverly Hills ‘experience’ as one of the founders of the modern Rodeo Drive, could not have envisioned how successful Beverly Hills would become. In fact, all of the founders could never have dreamed they would be laying the foundation for ‘No. 1 Luxury City’ in the world. I think that once they got over their surprise at the tremendous growth of the region and changes in technology and fashion, they would be very pleased.”

According to Gold, Beverly Hills is still a work in progress. Construction continues on two L.A. Metro Purple Line subway stops. A recently completed rebuild of major thoroughfare Santa Monica Boulevard already improved traffic flow. An emphasis on security and safety resulted in the installation of hundreds of new security cameras, and the recent launch of a Complete Streets planning process allows the city’s thoroughfares to better accommodate autos, bicycles and pedestrians. A “fiber to the premises” program promises to bring affordable and reliable municipal high-speed internet via fiber optic cable to everyone in Beverly Hills.

Although Beverly Hills still reigns as a Hollywood hub, the definition of what makes it so is expanding, with a diverse entertainment industry, technology, and lifestyle consumer products and service companies — some, household names across the United States. These include Live Nation Entertainment, RealD, Hillstone Restaurant Group (Houston’s Restaurant), Gauge Precision Instruments, PodcastOne, Sprinkles Cupcakes and John Paul Mitchell Systems.

Blair Schlecter, director, Economic Development and Government Affairs, Beverly Hills Chamber of Commerce, affirms the commerce defining the city is still in expansion mode. “[We] look forward to welcoming more innovative firms,” says Schlecter. “For example, we will be welcoming Spring Place later in 2018. The coworking space will feature private dining rooms and a rooftop bar for up-and-coming executives and entrepreneurs.”

Beverly Hills further bolsters its updated image for visitors using impressive technical wizardry via its first 360-degree experience. Investors and business travelers can go behind the scenes at some of its hotels and businesses before heading into town, according to Julie Wagner, CEO, Beverly Hills Conference & Visitors Bureau.

“Video technology like this keeps our brand relevant,” says Wagner, who notes the video stars local influentials Caley Alyssa, Alo Yoga brand ambassador; Nicolas Bijan, vice president, House of Bijan; and Stephanie Boswell, executive pastry chef, The Peninsula Beverly Hills. “We are also encouraging social media influencers to experience offerings throughout the city and documenting their visit in their own point of view to appeal [to] a millennial audience who will be tomorrow’s investors and business travelers.”

Wagner cites Beverly Hills’s last economic impact study (2016), showing 7.4 million visitors provided more than $2.8 billion worth of economic impact. And that momentum has not stopped. Its newest luxury property, the Waldorf Astoria Beverly Hills, is the 17th hotel and fifth 5-star hotel to open its doors in the last five years, resulting in Beverly Hills having more 5-star hotels per square mile than any other city in the world.

“At these hotels, guests receive first-class service and amenities, enabling them to rest and recharge in style for the next day’s meeting or event,” Wagner continues. “The city’s business district, known as the Golden Triangle, meanwhile, features over 300 restaurants with distinctive culinary offerings, which is also a big draw for the next generation of meeting planners and event attendees.”

The Rooftop by JG and Jean-Georges at the Waldorf Astoria showcase Jean-Georges Vongerichten’s convergence of French and California-American cuisine. Montage Beverly Hills, another 5-star property, houses The Restaurant, specializing in modern American cuisine and boasting a prime view over Beverly Canon Gardens, one of the most popular outdoor event spaces in town. 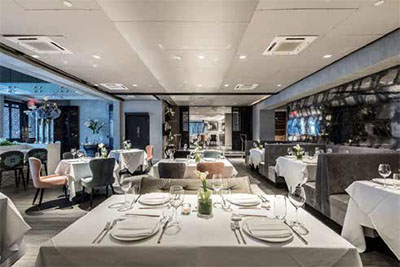 While Beverly Hills’s 100-year-plus history made its zip code world-famous, its vision for the next century promises to add even more zip to its potential as a destination.

SCENIC DRIVES
Everybody knows and loves the hallowed fashion show runway that is Rodeo Drive. However, scenic drives drape and wrap around Beverly Hills like opera-length necklaces from Harry Winston and Tiffany & Co.

The easiest place to start an exploration of the area’s full-on majesty beyond the Beverly Hills Central Business District is the stretch of Sunset Boulevard that starts at the West Hollywood/ Beverly Hills border. It ambles leisurely west into Bel Air, Brentwood, Pacific Palisades and Malibu before ending at the Pacific Ocean.

Drive north on Coldwater Canyon Drive past Sunset, and you will eventually wind up at the western access to Coldwater Canyon Park, located near the “top of the hill” at Mulholland Drive. A favorite of local families, the green expanse includes free parking, the TreePeople nature center and a 3.1-mile hiking trail with cinematic views of the city and the San Fernando Valley.

Trousdale Estates, on the eastern edge of Beverly Hills, rolls out an interesting history of 20th-century residential architecture. However, the grande dame is the landmark Greystone Mansion, a Tudor Revival mansion on lushly landscaped grounds anchoring the neighborhood. A choice site for charity galas and A-list parties yearround, it is open to the public for tours on most other days.