Just 20 years ago, Santiago experienced a wave of booming business with LAN Airlines, Microsoft and Yahoo! setting up shop in the city. Although Chile enjoyed rapid economic growth over the years, it is currently seeing a dip in its gross domestic product for the first time in decades. According to the International Monetary Fund, Chile’s GDP saw an average growth of 5.2 percent from 1987 to 2015 but is expected to slow to 1.5 percent in 2016. In part, a shifting dependency on the country’s leading export of copper after its gradual devaluation is to blame. Chile is responding to the dip by changing its focus to a post-copper economy with an increase of mining-related goods and services.

To help diversify the economy, Chile’s government declared 2016 the “Year of Productivity,” with proposals for structural reforms to quickly improve overall productivity by decreasing the costs for entrepreneurs and small businesses. The measures will help reduce business headaches including administrative procedures and red tape. The Organization for Economic Cooperation and Development says Chile’s private sector has also proposed measures to help further improve productivity at Chilean firms and businesses.

The new business-focused initiatives and influx of tourism dollars is good news for MICE travelers. Cradled between the Andes Mountains and the Pacific Ocean, Chile’s bustling capital of Santiago draws business travelers and tourists alike to its world-class dining and reputation for safety and infrastructure. Santiago’s stable economy, infrastructure and growing tourism bring new options for business travelers and the MICE industry. For starters, Aeromexico announced increased flights in 2017 on its international routes to Santiago de Chile as well as Amsterdam, Madrid, London and Shanghai.

Located just 20 minutes from Santiago, the Commodore Arturo Merino Benitez Airport is the largest air terminal in Chile and among the most modern in Latin America. In 2015 LATAM Airlines Group opened a new VIP lounge at the Santiago de Chile International Airport. Occupying more than 23,000 square feet with the ability to host 460 passengers, the VIP lounge caters to business and long-term travelers alike with showers, a business center and sleeping room. On the ground, Santiago’s high-speed train, Metro de Santiago, serves around 2.2 million passengers daily and connects with a network of buses through Transantiago.

In part, the MICE industry has driven the need to develop Santiago’s infrastructure as the number of conferences, exhibitions and trade fairs increased. Business tourism is thriving in Chile, with 31.6 percent of Chile’s travelers coming for business in 2013. Salvatore Di Giovanni, Chile’s investment attraction executive, says among the country’s investment opportunities are urban hotels targeting corporate and MICE segments and overseas visitors. The capital city claims one of the continent’s most popular destinations for meetings, incentives, conventions and exhibitions. In 2015 Santiago hosted major conferences and events including the 54th ICCA Congress and XXII World Congress of Neurology. The city’s current capacity for venue and meeting space extends to more than 355,000 square feet. 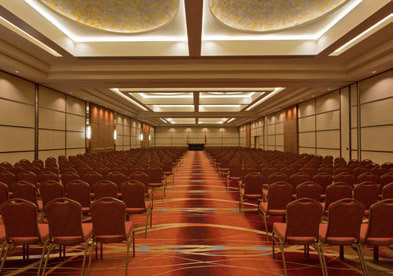 Meeting planners will find no shortage of hotels and event spaces to choose from in Santiago. The restaurant Vista Santiago lives up to its name with one of the best views of Santiago near the southern slope of Cerro San Cristóbal. Its panoramic terrace hosts executive corporate events, and after a lunch or dinner meeting, San Cristóbal is also worth the climb for the view of the city.

The upscale Hotel Fundador lies within close proximity of Santiago’s best attractions. Vibrant and colorful meeting rooms feature a total capacity of up to 400 people in auditorium assembly or smaller rooms for events and conferences.

The Santiago Convention Bureau promises continued expansion in Santiago’s hotel rooms and meeting spaces. In 2013 Chile’s Foreign Investment Committee presented a portfolio of more than 30 investment opportunities in tourism to meet the growing demands of tourists and business travelers. To date Santiago has reached more than 11,500 rooms distributed in 3- to 5-star hotels, with the expectation to open the doors to more than 13,800 rooms by 2018.

MICE planners will have no trouble organizing an array of activities for business travelers. Nestled at the foot of the Andes, the boutique winery Viña Aquitania works with small quantities to produce remarkable, high-quality wines. Private day tours can be arranged to Portillo Ski Resort from Santiago, and Centro Gabriela Mistral features concerts and performances most days of the week. The renowned cultural performing arts center, named for the first Latin American woman to win the Nobel Prize in Literature, features rotating art exhibits. To catch a final glimpse of what Santiago has to offer, take in the view from Sky Costanera, the highest structure in South America, and reflect on the thriving business center below.

Dating back to 1910, the historic Cultural Estación Mapocho was designed by Emilio Jecquier, a Chilean architect who lived in France. The station opened to the public in 1913 and stands as a relic of Chile’s journey through its societal changes and independence. After Chile returned to democracy under President Patricio Aylwin, the station was revived in the 1990s and today serves as an artistic and cultural hub of Chile. Centro Cultural Estación Mapocho also hosts year-round international fairs and conferences. The venue holds up to 2,000 seated guests and supports any type of event from conferences to performing arts and social events.

Situated in the heart of Santiago, The Singular Santiago Hotel offers easy access to the hip Providencia, Bellas Artes and Lastarria neighborhoods. Meeting spaces range from furnished rooms designed for as few as 12 people to an amphitheater with an anteroom and a spacious exclusive-use outdoor patio holding up to 40 people. But The Singular’s jewel is La Cava, an underground wine cellar tucked behind imposing wooden doors where more than 2,000 bottles of Chilean wine surround a table for 10. Book the room for up to 10 people or a group wine tasting for 15. Executive Chef Laurent Pasqualetto designed a tapas menu that pairs with each varietal.