What’s new in Las Vegas? Big bucks. Not money changing hands at gaming venues, but brick-and-mortar investments by resorts intent on breaking more visitation records. Nevada’s famous desert oasis hosted 42 million visitors in 2015, breaking the record set in 2014. More than 5 million of those guests attended conventions, meetings or events. Vegas ranks as the top destination in North America for large (300-plus attendees) meetings and fourth for groups of all sizes, according to DestinationMAP’s survey of major meeting and convention decision makers. The 2015 study included 40 North American destinations. But no one rests on those laurels or depends on casinos to attract meeting planners. Gaming is not a priority for group business, according to Michael Dominguez, senior vice president of sales and chief digital officer, MGM Resorts International. “Gaming is still important, but it’s an amenity like entertainment, for after events, after hours. At MGM Resorts, 75 percent of our revenue is non-gaming.” “Las Vegas is a master of reinvention,” says Chris Meyer, vice president of global business sales, Las Vegas Convention and Visitors Authority. “From resorts to entertainment, restaurants and attractions, there is something new to experience with every visit. Currently there is more than $7 billion in projects under construction or in the planning stages. No other destination is making this type of investment to stay fresh and cutting edge.” One notable player, MGM, partnered with AEG on the 20,000-seat T-Mobile Arena, a $375 million venue that opened last month. It will host more than 100 events a year, ranging from basketball to bull-riding and big-name entertainers. 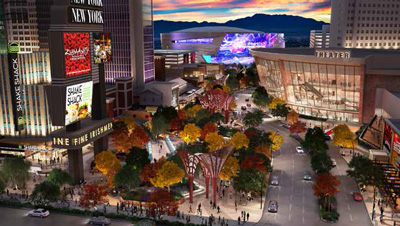 Connecting the T-Mobile Arena and the New York-New York and Monte Carlo resorts is a new attraction by MGM called simply The Park. Drawing inspiration from the world’s iconic plazas and promenades, the outdoor pedestrian mall features cafés, bistros, bars and live entertainment as well as sculptures, water features and casual seating areas. “There’s an expectation for Las Vegas to change quickly and always be able to offer something new to our customers,” says Dominguez. “We’re putting a lot of money into outdoor venues and activities. During the middle of the day, groups are in air-conditioned meetings and events, but they want to be outside in the evening.” The Park continues an outdoor trend begun in 2014 by the LINQ Promenade between Caesars Entertainment’s Flamingo Hotel and Casino and the new LINQ Hotel Las Vegas. Attractions at the $500 million shopping, dining and entertainment district include the High Roller, the world’s tallest Ferris wheel. The city introduces some new sporty outdoor venues this year for small meetings and incentive groups, such as Topgolf Las Vegas with its 100-plus outdoor, climate-controlled golf hitting bays; dining and entertainment areas; and 3,000 square feet of meeting space. Visitors to SPEEDVEGAS can drive muscle cars or exotic foreign cars on a twisting Formula 1-style racetrack. The 100-acre, $30 million motorsports complex includes a 1,000-guest event center. The outdoor movement traces its roots to the Fremont Street Experience which in 1995 created a five-block canopied pedestrian plaza that sparked a rebirth of the historic district. Fueled by more than $1.55 billion in recent development, Downtown Las Vegas came back in a big way, with attractions such as the $450 million Smith Center for the Performing Arts in 61-acre Symphony Park; 18b, the Las Vegas Arts District with 18 blocks of galleries, bars, restaurants and shops; and Fremont East, a $350 million project attracting new businesses and residents. “Downtown Las Vegas is particularly ideal for small to mid-sized gatherings,” says Las Vegas Mayor Carolyn G. Goodman. “Larger hotels like The Plaza Hotel & Casino, The D and the Golden Nugget boast large event space, while Downtown Grand features a more intimate setting perfect for corporate meetings and weddings.” Las Vegas’ convention and event space covers 11 million square feet and continues to grow — often in a “green” way. Mandalay Bay Resort and Casino’s convention center now includes 2 million square feet, crowned by the world’s largest convention center solar array. The Aria Resort & Casino is expanding its LEED Gold-certified convention center to 500,000 square feet. Caesars Palace celebrates its 50th anniversary with a $75 million renovation of its Roman Tower. And construction continues on Resorts World Las Vegas — a $4 billion hotel, arena, casino and convention center project. As anyone who has been part of a group experience in Vegas knows, what happens in Vegas doesn’t always “stay in Vegas.” Word of successful meetings and events travels fast, and success breeds success.