Not many years ago, a story about the city of eternal springlike weather, flower farms and towering mountains would likely never have been published in a major travel or business publication. Any mention of this center of drug cartels only documented the criminal activity of a city under siege, even as millions of residents went about their daily routines. Fortunately, in the late 1990s, things began to change for the better.

Today, Colombia and Medellín attract business and tourists alike, and the city is showing off its accomplishments. In 2014 The Wall Street Journal selected Medellín as its Most Innovative City of the Year, outranking both New York City and Tel Aviv. The World Travel Awards named the city South America’s leading meetings and conference destination in 2015.

Visitor numbers grew to almost 4.5 million in 2015 and are on track to set another record in 2016, led by visitors from the United States. About 45 minutes from downtown, the city’s José María Cordova International Airport offers direct service from all of Latin America, several U.S. cities and Europe. Its domestic and regional airport, Olaya Herrera, close to downtown, serves shorter flights within Colombia and surrounding countries.

The impressive metro rail system remains the envy of Latin America. It connects to a cable car system that takes locals and visitors high above the city to Arví Park, a 4,000-acre garden of pine, eucalyptus and tropical flowers and plants, all protected from development. The park lies just 20 minutes from downtown’s bustling offices, restaurants and hotels. Sundays find many streets closed to traffic for neighborhood festivals, surrounded by openair restaurants and cafés. Joggers and bikers take full advantage of the clean, cool, mountain climate and fragrant air of a high-altitude city (elevation more than 5,000 feet) situated on the equator. Medellín, the Orchid Capital of the World, has been rediscovered.

The most popular neighborhood for visitors and business travelers is the Poblado district, a 24-hour area of always-on restaurants, cafés, bars, modern luxury hotels and condominiums. Locals and visitors pack open-air restaurants and stroll the tree-lined streets searching for their next favorite restaurant, such as Carmen or El Cielo.

Exploring the parks and squares, you’ll discover cuisine from around the world served in a sophisticated, trendy setting, but you don’t have to spend big here to entertain clients. Many cafés offer hearty Colombian fare — such as grass-fed beef, tender pork chops, local mountain trout and superb bean soup — for affordable prices. Be sure you have local currency, the Colombian peso, as U.S. dollars are not widely accepted and your credit cards may not be, either, except in the business hotels and upscale restaurants. The exchange rate is currently one of the most favorable in the Americas. A full-course meal with tip can be as little as $12, and the service is generally excellent, although English is not widely spoken by service people, police, cab drivers or smaller merchants.

Entertaining guests and clients is often conducted in the lobbies, restaurants and bars of the major business hotels, such as the InterContinental, Diez, Movich and Dann Carlton. Guests enjoy the favorite local beverage, shots of Ron Medellín Rum, a spicy spirit. Meetings and conferences center around the Plaza Mayor, the major convention venue, offering space that can accommodate 22,000 in 22 separate meeting rooms or as an exhibit hall. All told, the city boasts more than 11,000 hotel rooms.

By far the biggest flower event of the year in Medellín is the Feria de las Flores, held the first week of August. If your visit coincides with this event, you and your colleagues can witness the march of the silleteros, a parade of the traditional mountain people who carry huge displays of various flowers on their backs down the valley to sell in the city. At other times of the year, a visit to the expansive Botanical Garden, housed in a unique indoor-outdoor building near the Universidad district, serves up a feast for the eyes. 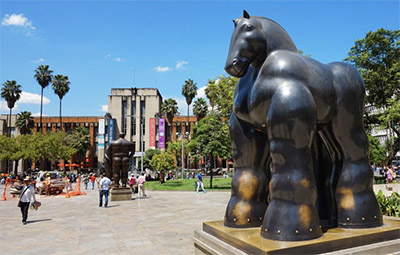 A favorite for fans of pre-Columbian art, visitors head to Museo de Antioquia, Colombia’s second-oldest museum. It houses modern works as well, and here the museum displays its outstanding collection of 92 Fernando Botero sculptures. Other even larger pieces reside across the street in the plaza near another popular museum, the Palacio de la Cultura.

Check out Colombia Reports, the local English-language magazine, to find out what’s going on during your stay. The largest paper, El Colombiano, also publishes some articles in English.

Most visitors choose a stop at El Tesoro mall for a modern shopping experience. It stands as one of the largest and best collections of stores in the city, and most of the shops have bilingual employees eager to help.

Medellín is a city of proud people eager to move beyond a troubled past and do business with the world. Its misty mountains make for cool business opportunities.