IN MASAI MARA, KENYA’S most storied game preserve, the animals have been playing hide and seek all morning. But it isn’t long before we spy silhouettes amid the expanse, an awe-inspiring landscape of tall grass which unfurls like bolts of amber-colored cloth in every direction. A terrain of golden plains, graceful acacia trees and granite boulders beneath immense skies, the Mara plays second fiddle to its best-known residents, a diverse group of protected wildlife which includes not just the Big Five (lion, Cape buffalo, elephant, leopard and rhino) but an array of birds, reptiles and tiny mammals, too. Shared with its other official inhabitants, the ancient Maasai people, the park spreads out for some 580 square miles in Kenya, stretching eventually into neighboring Tanzania. Legendary warriors, nomads and cattle herders, the colorful Maasai named this land Mara — which in their language means “mottled.”

As I peer through binoculars from my safari vehicle, focused across a gorge, I understand what that means. At first the scenery appears almost mono-hued — solid as far as the eye can see. Suddenly, that sea of gold ripples with life, or “mottles” with movement in the distance. From what might be a door in the thick vegetation, a male lion emerges to trudge purposefully across the hill before us. As if on cue, another appears, his mane even bushier than the first. Walking perhaps 30 feet apart, they follow the skyline in measured steps. Spectators, we pursue them, our guide guessing where they might go next. He thinks they’re heading for water, so we speed toward a cliff nearby which overlooks a river bed. Some minutes later, the lions appear across the shore from us, descending to the river to drink. Even that is thrill enough. But the scene improves when four lionesses and their playful cubs join the party.

Later, at Sand River Masai Mara, a 16-suite, luxury, tented camp set on a remote section of the preserve near the border of Tanzania, we meet Mamba, a Maasai warrior who works as an askari at the camp. Askari, essentially camp security in the Mara area, often wear classic Maasai garb — a bright red blanket called a shuka and leather sandals — and don brass and beaded jewelry and carry a staff-like weapon known as a rungu. Their instincts and affinity for the wilderness, much of it passed down as Maasai lore for generations, make them ideal companions to walk us safely to our stand-alone tents after dark and to fetch us again at dawn before our game drives begin. Mamba comes in handy one early morning when a grumpy, massive Cape buffalo wanders into camp and blocks my neighbor’s exit from her tent. 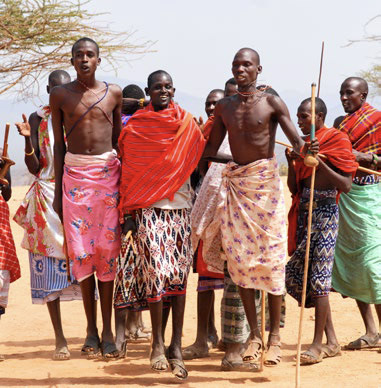 While the Maasai people we meet at Sand River don’t hesitate to share details about their culture when asked, we find out much more with an afternoon visit to an actual Maasai village, located across the preserve. We’ve seen some villages from the air already. From the bush plane’s bird’s-eye view, the villages look like mystical circles irregularly spotting the grassy plain. Up close, we discover them to be small compounds, built to keep their cattle safe. A thorn and tree fence encircles a large, empty tract in the middle, which acts as both corral and main street. Occupying the perimeter, small houses, hand-built from twig and dung, have low ceilings and dark, tiny rooms inside. Beds are made from woven branches, then cushioned by animal skins and piles of grass. In one room, a makeshift kitchen’s hole in the roof releases the smoke that gathers when they cook.

Our visit lasts about an hour. It begins with a greeting from the chief, then continues with a performance by the women of the village. With plaited hair, and smudged with ochre and adorned with abundant jewelry, their haunting beauty matches their otherworldly, lullaby-like songs. When the men step up to strut their stuff, they demonstrate their vertical jumping, a feat many visitors have heard about before they’ve come. Taking turns, each “warrior” propels himself into the air. We are told they can continue jumping for hours in a trance-like state. Later, they show us how they make fire, rubbing two sticks together Boy Scout-style — but actually succeeding with a roaring flame. They talk to us honestly about the old days, when hunting lions and other animals was part of their way of life. They explain their polygamy and relate that a man’s worth comes from how many cattle he owns. When the tour ends, they lead us to tables brimming with beaded jewelry, carved figurines and woven shukas for sale.

As we leave, now wearing as many bracelets as the Maasai themselves, we marvel at their commitment to their centuries-old way of life. I’ve read the Maasai descended from the Nile Valley. They’re mentioned in the Bible as gatekeepers and fierce warriors. Today, though some keep cellphones tucked in their shukas, their timelessness gives a glimpse deep into Africa’s history.

Most visits to the Maasai are organized by safari companies as part of a more extensive itinerary. Try Sky- Safari by Elewana Collection.