Living the Good Life in Sardinia

Thirty years ago, after Belgian demographer Michel Poulain and Sardinian doctor Gianni Pes discovered regions on the Italian island of Sardinia with large numbers of centenarians, other researchers looked into the phenomenon to determine why so many island residents were living past the 100-year mark.

American researcher Dan Buettner pointed out in his studies that men in several Sardinian villages live the longest and healthiest lives of men anywhere on the planet, almost completely free of cardiovascular disease. And while women around the world generally outlive men, in Sardinia both sexes grow old together, perhaps resulting in the longest marriages in the world.

My significant other and I did not expect to increase our life expectancy by spending a few weeks in Sardinia, but after visiting the island’s mountainous interior we began to understand why Sardinia is known as one of the world’s “blue zones,” a term derived from the blue circles Poulain and Pes drew on their map of Sardinia that highlighted the villages with the most residents over 100 years of age. Of course, not all Sardinians live that long, but there are still 10 times more centenarians per capita on Sardinia than in the United States.

Sun-splashed and peaceful, Sardinia offers individuals, couples and families the perfect vacation retreat, whether coming from other destinations in Europe or directly from the United States.

Although mass tourism to Sardinia began in the 1970s, after Prince Aga Khan developed a portion of the island’s Emerald Coast into a jet-set hideaway, European writers and artists had come for decades before that, basking in the sun and enjoying great food and incredible scenery. During peak season, June through September, the coastal beaches are packed, but the island’s interior can provide a quieter, more authentic and healthier experience.

Small enough to cover comfortably by car in a week yet diverse enough to offer snow-covered mountains in winter and tropical-looking fishing villages year-round, the island possesses a look and lifestyle so out of time that writer D.H. Lawrence’s comment in his 1921 novel Sea and Sardinia that it “does not belong to our present- day world” still rings true today.

Near the northern village of Calangianus, travelers pass through miles of dense groves of trees whose trunks are covered not in normal tree bark but in soft, brown cork. From these natural cork oak forests more than 100 companies in Sardinia extract their product.

At the island’s largest cork factory, Peppino Molinas & Sons, huge stacks of cork sit outside the plant. “The men use an axe and special tools to strip the cork from the tree, then bring it to the factory where it is left outside,” said marketing manager Piera Cossu. “The cork must remain outside for a minimum of 12 months before it is brought into the factory for cutting. Each tree is stripped at regular intervals of 10–12 years. Once inside the factory the cork is inspected for quality, defects and tree diseases. The cork is boiled after its seasoning outside, then machines punch holes in the flat cork to produce the familiar wine stoppers. Approximately 2.5 million cork stoppers are produced each day at this factory.” 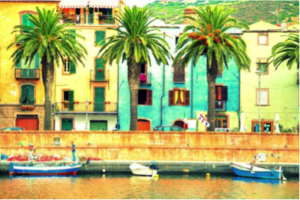 Driving from Calangianus to the west coast city of Oristano can take two hours using the modern highway that skirts the towns or a full day traveling through ancient hilltop villages with cobblestone lanes and along coastal roads with breathtaking views of the sea. Stop for lunch in fishing towns like Bosa, where mullet, tuna, swordfish, clams, mussels, eels and lobster fill local markets every day.

Close to the village of Cabras, thousands of pink flamingos wade in the shallow lagoons, and nearby vineyards produce some of the best wine in the country. At the Contini Winery, established in 1898, “Four generations have watched over the grapes,” said Paolo Contini, one of the family members.

“Over time the mistral winds from Spain and France helped spread favorable soil onto Sardinia, which gives the wine here a special taste and smell,” said Contini. The winery has vineyards just outside the village and a small tasting room in Cabras where visitors can sample the product and purchase bottles to take home.

The island’s traditional “healthy” wine, a red known as Cannonau (named after the Grenache grape) is so ubiquitous that about one bottle in every five of Sardinian wine is a Cannonau di Sardegna. The Cannonau wines tend to be high in anthocyanins and polyphenols, antioxidant-rich compounds which have been linked to heart health and associated with Sardinians’ longevity.

On the short drive from the Contini Winery to the village of Gergei, the scenery changes drastically from the lowlands of the west coast to the foothills of the 6,000-foot Monti del Gennargentu range. Here, amid the hilly sheep pastures and small villages dominated by stone churches, you’ll see groves of olive trees, home to the Argei Le Fattorie Renolia company that produces unfiltered, organic extra virgin olive oil from the Mallocria olive, a type you can find only on Sardinia.

The production of olive oil has been a tradition in Sardinia since the Phoenicians, and its importance to the island’s lifestyle cannot be exaggerated. “In Sardinia none of the companies mass produce their olive oil. Although they do ship some product to customers in Europe, very little Sardinian olive oil finds its way to supermarket shelves in the United States. Most of it is kept here, sold in small village markets and to local restaurant chefs,” said Sylvia Hernberger, an Argei employee happy to show us around. 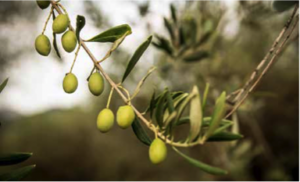 At Argei it takes about an hour from the initial washing of the olives to their arrival under the press, which grinds them into an olive paste. A spinning process then extracts the oil, which is stored in stainless steel containers and left to settle for about a month, during which the oil becomes clear and ready for bottling. The olive harvest begins in September or October, and visitors are welcome to view the process and taste the product.

In his book, The Blue Zones Kitchen: 100 Recipes to Live to 100, Dan Buettner says Sardinian cuisine is essentially peasant food. “The food is beans, greens and whole grains,” said Buettner. “They eat a lot of bread and cheese, mostly Pecorino, and vegetables from their gardens.” The traditional Pecorino cheese is made from the milk of grass-fed sheep, high in omega-3 fatty acids. Meat is largely reserved for Sundays and special occasions.

Located close to the village of Luogosanto in northeastern Sardinia, Balaiana Eco Retreat offers a program that includes yoga and meditation as well as coaching and massage training. Elke Bayer, retreat founder, is a certified Anusara yoga teacher. The property offers private rooms and baths, a pool, a dining hall with an organic menu and excursions. The nearby village features houses painted in warm earth tones with geraniums, bougainvillea, lemons and orange trees providing a peaceful and nicely scented atmosphere.

Another wellness venue is Yoga in Sardinia, a cultural nonprofit association that offers a few days or a week of gentle hatha yoga, pranayama and yoga nidra as well as hiking and mountain biking. “Being on retreat means we have time to give each person individual attention, with the option to have one-to-one mentoring included in the price so you can discuss any experiences or challenges you have with your practice,” said co-owner Alexandra Redmond. The group uses the Galanias Hotel as its main base, a quiet property close to the sea in the countryside near Bari Sardo.

Sardinia has three main airports, all served by major and budget airlines from many Italian cities and select European cities, especially during summer season. If you book accommodations or a rental car in northern Sardinia, fly to Alghero (AHO) or Olbia (OLB) airports. For southern Sardinia, fly to Cagliari (CAG). Taxis are available at airports to reach hotels, but it’s best to rent a car upon arrival, as roads are well-maintained and feature good directional signage. At press time the EU continued to ban American travelers due to high U.S. coronavirus infection rates.

I Frati Rossi Ristorante
Located in Porto Cervo on Costa Smeralda, the restaurant’s terrace perches on a hill overlooking the sea. Savor the fresh fish, seafood and pasta dishes.
Via Paolino Azara, Arzachena
$$$$$

Trattoria Portixedda
The small restaurant in the pretty coastal town of Oristano serves favorites like grilled swordfish, prawns and cuttlefish along with excellent local vegetables. Reserve your table in advance.
Vico Solferino 6, Oristano
$$$

Key West Rolls Out the Rainbow Carpet for LGBTQ+ Travelers

Sofitel Rome Villa Borghese invites art lovers to step back into the Renaissance with its new Caravaggio Experience. The experience entails a complete immersion into the work and life of Michelangelo Merisi da Caravaggio, the iconic Renaissance painter.

If you’re a fan of adventure travel and luxury cars, Off the Map Travel has an experience for you. The new Drive the Fjords tour allows travelers to explore the Norwegian fjords and Sunnmore Alps in style in an electric Porsche Taycan Cross Turismo.