SAUDI ARABIA IS CHANGING, with Jeddah leading the way. The Red Sea port has always been the most liberal city in the kingdom (perhaps surprisingly, because it is also the arrival point for millions of devout pilgrims to nearby Mecca, Islam’s holiest city). Even when the country’s religious police, the Committee for the Promotion of Virtue and the Prevention of Vice, were at their most draconian, Jeddah provided a degree of leeway.

Now, as then, my preferred place to wake up (to an inevitably sweltering Jeddah day) is in one of the 91 private villas of the Mövenpick Resort Al Nawras, on a private island just off the city’s waterfront North Corniche. Draw back the drapes and look out on your own glass-walled garden, your swimming pool and the crinkled ultramarine expanse of the Red Sea beyond.

The hotel’s Al Wadaa Restaurant is ideal for a power breakfast. Select a table with a sea view, then dig in to the lavish buffet. The relaxed setting is conducive to conversation. Gazing out to the horizon, you’ll find it hard to believe you are within a city of 4 million people. 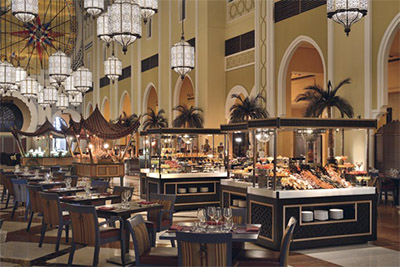 You’ll be reminded of that the moment you leave the resort. Out the gates, across the short bridge to the mainland, you’re immediately into hectic traffic. Driving in Saudi Arabia is not for the faint-hearted. It’s probably best to rely on taxis, at least until you get a feel for the rules of the road.

One of the most significant recent changes in the kingdom is the lifting of the ban on women drivers (Saudi Arabia was the last country in the world with such a prohibition).

The daytime heat is ferocious; in the hottest months the mercury often tops 100 degrees Fahrenheit, with 100 percent humidity. Business dress for men is formal, so take a lightweight suit. In some circumstances (for instance, visiting a construction site) it is permissible to wear a short-sleeved shirt with a tie.

The situation for women is much stricter, though even that is beginning to change. Women are expected to wear an abaya (a shape-less head-to-toe dress) in public and to keep their head covered. Usual international business dress is acceptable in meetings. As Saudi Arabia cautiously liberalizes, these restrictions may soon relax.

As you’d expect of a major city, Jeddah has no shortage of excellent restaurants, representing the full cross section of global cuisine. For a prestige lunch venue, try the Mataam al Sharq at the Waldorf Astoria Hotel. As well as the opulent main dining room, the restaurant offers private facilities for groups of 10–40. The food is Middle Eastern, prepared by a Lebanese chef.

In the northern part of Jeddah you may catch glimpses of a silhouette rising from the city’s desert fringe. That’s the $1.2 billion Jeddah Tower (formerly known as the Kingdom Tower), the tallest building in the world when it tops out in 2020. As the world’s first kilometer-high skyscraper, it will be the centerpiece of a major new development, the Jeddah Economic City.

Simultaneously, the nearby King Abdulaziz International Airport nears the end of a $7.2 billion expansion that will transform it into one of the world’s premier hubs, ultimately giving it a capacity of 100 million passengers per year. There’s a dedicated Hajj terminal to receive more than 10 million annual pilgrims, who will soon be able to continue to Mecca by a new high-speed rail link. 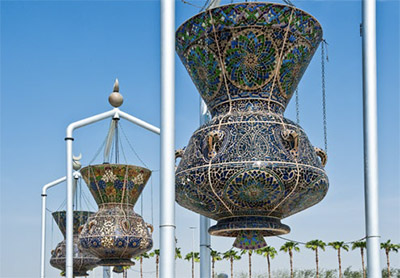 The Mameluke Mosque Lanterns in the Corniche area © GIUSEPPEMASCI | DREAMSTIME.COM

Toward the end of the day, many locals gravitate to the Corniche to stroll along the waterside as the sun sets. I like to start at the Sculpture Museum, an outdoor park containing work by Henry Moore, Alexander Calder, Joan Miró and others. From there I head south, taking my time because even with a sea breeze the heat is stifling.

Head for the Culture Café and Lounge, serving Arabic coffee, milkshakes and mouthwatering cake. From air-conditioned comfort you can look out across the bay to King Fahd’s Fountain, jetting a column of saltwater nearly a thousand feet into the air (the tallest fountain in the world). After sunset, 500 spotlights illuminate it.

Saudi Arabia is not an easy country for Westerners. Despite the reforms, all religions other than Islam are banned, atheists are classified as terrorists, and homosexuality carries the death penalty. Yet the winds of change are beginning to stir, and Jeddah will feel them first.