MILAN HAS QUIETLY POWERED ITALY for centuries but may be on the verge of a higher profile than ever before. With a gross domestic product of $308 billion in 2016, its Porta Nuova District alone boasts a larger economy than four-fifths of the world’s countries, making it the richest neighborhood in Europe. Already a leader in fashion, publishing, manufacturing, banking and more, as Milan steps further into the spotlight in the wake of Brexit, the timing is perfect for a business trip here.

It all starts with coffee in the Piazza del Duomo, Milan’s spiritual and commercial heart. Meet clients for a standing espresso at Bar Duomo for a head-on view of the cathedral’s ghostly white spires, or sit down to a morning cappuccino and croissant around the corner at Giacomo Caffè. You’ll find the most luxurious breakfast at the historic Caffè Motta inside the Galleria Vittorio Emanuele II. 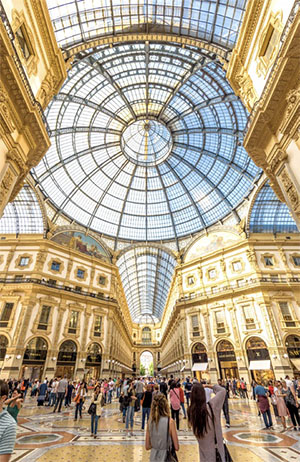 This spectacular arcade serves as a glass-domed passageway connecting the Duomo with Milan’s other top attraction, the Teatro alla Scala, a premier opera venue. Housing some of the top designer brands like Prada, Versace, Louis Vuitton, Gucci and Armani, the Galleria also features numerous restaurants and cafés sure to impress. Just as the Galleria set the template for malls all over the globe, Caffè Motta pioneered the concept of the quintessential Italian café. Try the panettone, a citrusy raisin cake. From there, make sure to stroll down one of the shopping streets that radiate outward from the piazza, like Via Dante toward the Sforza Castle.

For lunch meetings with clients, hop on the tram to eat lunch on the go, literally. ATMosfera converted one of the city’s beloved trams into a fine-dining establishment. Reservations are critical to secure one of the eight elegant tables surrounded by teak paneling and gorgeous views of the streets passing by, and you can even book the tram exclusively for your meeting. Many of Milan’s trams have operated since the early 20th century, outlasting war and recession, meaning they’re living museums that remain close to the hearts of locals.

All of Milan’s transportation has the same singular charm: both classic and easy to use. The city’s three airports — Orio al Serio; Linate; and the main airport, Malpensa — offer trains or shuttles to the city center. For €11, the Malpensa Express arrives in 40 minutes at Milan Central, the grandest train station in Europe, whose onward options include high-speed connections to nearby Turin, Bologna and Venice; the metro’s four lines; the tram; and 80 bus routes (Line 94 stops at most of the important sites around the city center). Buy tickets — including day, week or month passes — at the machines or kiosks, and always remember to validate your ticket in the machine.

Choosing where to lunch from Milan’s more than a dozen Michelin-starred restaurants may be a challenge, but Bice, a mainstay, specializes in business lunches and even offers a private room. Solferino, another hundredyear- old establishment, serves Milan’s specialty, osso buco, veal shank braised with white wine. The risotto that comes on the side is tinted gold by saffron to represent the financial aspirations of this affluent city. Pair it with a Chianti from the attached wine shop.

Milan has an abundance of hotels for your afternoon meeting or lodging. At the Senato Hotel, formerly a family’s private residence, choose from a variety of lavishly designed modern spaces ideal for quiet discussion. In addition to all the standard luxuries, the Park Hyatt offers numerous meeting rooms, including high-tech services like simultaneous translation for up to 100 participants. Also on site is a beloved local bar, the Mio Lab.

Perhaps the best location to host your meeting is the Town House Galleria, the world’s first certified 7-star hotel. Located within the Galleria Vittorio Emanuele II, the hotel accesses a walkway overlooking both the grand atrium and the rooftops of Milan, including the spires of the Duomo.

Last, it’s time for the aperitivo. Endless opportunities await on nearly every street to take part in this most Milanese tradition, punctuating the work day and segueing into luscious dining, but your best bet has to be Terrazza Aperol. Overlooking the Piazza del Duomo, where the day began, this chic bar occupies the original site of the famous Caffè Motta. Distilled from bitter herbs and rhubarb, the vivid orange spirit, Aperol, is actually sweeter and smoother than its stronger sister, Campari, and can best be enjoyed as a spritz, with equal parts Prosecco and a splash of soda water, as you close the day.