DYSON SUPERSONIC
Dyson made something as mundane as vacuuming look like something out of Blade Runner. It was only a matter of time before the engineers brought their impressive technology to personal care, unveiling the most high-tech blow dryer you’ve ever seen. A 13-blade, brushless motor spins at 110,000 revolutions per minute (compared to the usual 20,000) with buttons on the back to control temperature and air flow. The technology, much more durable than a traditional hair dryer, allows for a more compact design by hiding the motor in the handle. $399.99.
dyson.com 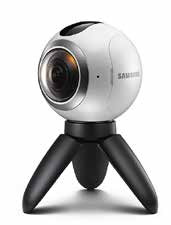 SAMSUNG GEAR 360
Virtual reality is becoming a popular format for entertainers, giving the viewer a new way of experiencing their favorite places and events. However, Samsung doesn’t want you to just watch the content, it wants you to make it, specifically with the Samsung Gear 360. This small, dual-camera device makes it easy to capture full, immersive, 360-degree video. Operation is simple, allowing you to switch between video, time-lapse, loop and photo. The bundled video editing software made specifically for Gear 360 allows you to cut various shots together in addition to converting the video into a traditional rectangle for sharing on social media. $349.99.
samsung.com 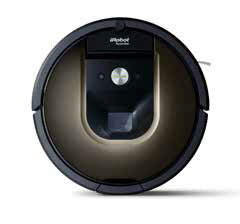 IROBOT ROOMBA 980
Vacuum robots have been around for a while, but they’re not always all they’re cracked up to be. The main complaints include the inability to map the floor and a lack of suction. The Roomba 880 introduced two AeroForce extractors, making it possible to clean a carpet without a brush, but the 980 improves upon the previous model by implementing visual simultaneous localization and mapping technology. This includes a camera and room sensor for the 980 to see obstacles and create a map of the room to ensure the entire space gets cleaned. $899.99.
irobot.com 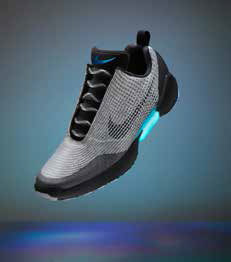 NIKE HYPERADAPT 1.0
Ever since Back to the Future Part II, you’ve been waiting for Nike to develop a pair of self-lacing sneakers. The company released a limited-edition run of the Nike Mags worn by Michael J. Fox (raising $6.75 million for his foundation for Parkinson’s research), and the technology is now officially available in Nike’s Hyper-Adapt 1.0, utilizing what it calls electro adaptive reactive lacing, which means the shoe detects the contours of your foot and tightens accordingly. $720.
nike.com